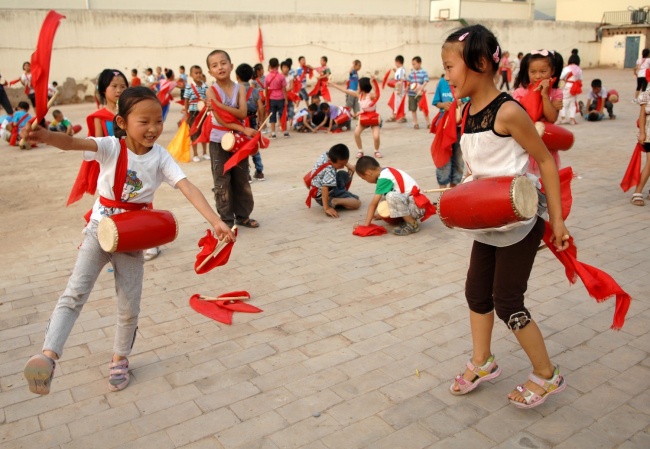 Living in China is not easy.
When there are more than 1.5 billion people like you in a country with no
social guarantees, you don’t have a choice other than to fight and claw your way
up. Chinese kids, though, are quite ready for such a challenge because their
hard work starts with the very first year at school.
I used to work as an English
teacher at four different schools in China, and it’s very interesting for me
now to compare the European and Chinese approaches to education. 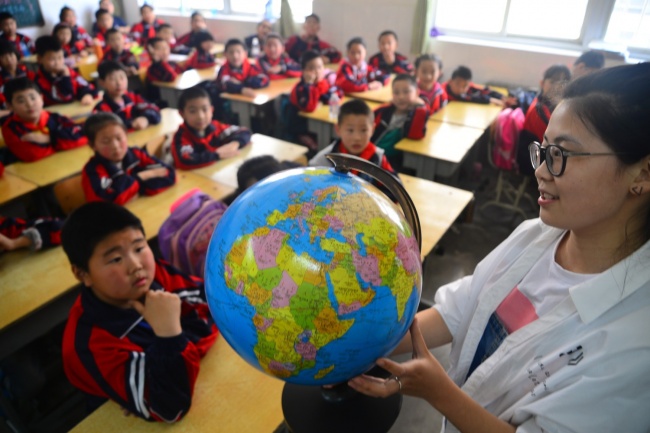 1. Many Chinese schools don’t
have central heating, so both teachers and students leave their overcoats on in
winter. Central heating is only present in the north of the country. Buildings
in Central and Southern China were built for a warm climate, which means that
in winter, when the temperature may fall below 32°F, the only means of heating
are air conditioners. School uniforms are all alike: sports suits with broad
pants and a jacket. Their design is similar with the exception of the colors
and school emblems on the chest. All school premises are confined by large iron
gates which are kept closed at all times. They are only opened to let the
schoolchildren out.

2. Schools in China practice
warm-ups every day (and not just once a day) and do a general lineup. A typical
school morning starts with a warm-up, then goes to the lineup where kids learn
the main news and see the school or state flag raised. All children do eye
exercises after the third lesson — they press special points on their bodies to
relaxing music and an instructor’s recorded voice. In addition to the morning
exercise, there’s also an afternoon one at about 2 p.m. Music starts playing,
and all the kids pour out of their classrooms (if there’s not enough space
inside) and begin raising their arms to the sides and up and hopping in place. 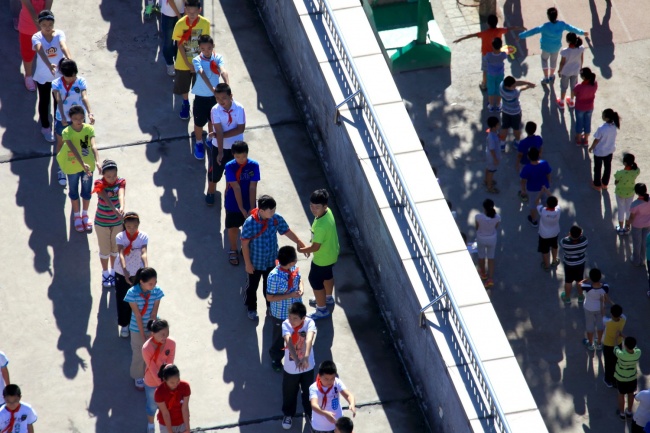 Chinese
schoolchildren exercise on the roof of their school in Jinan.

3.The big break, which is
also the lunch break, usually takes a whole hour. During this time, kids manage
to eat at the canteen (if there isn’t one, they receive special lunchboxes),
chase each other, shout, and be the little kids they are. Teachers at all
schools get free lunches — and a good one, I should say. The lunch is
traditional: one meat dish, two vegetable ones, some rice, and a bowl of soup.
Expensive private schools also offer fruits and yogurt. The Chinese are hearty
eaters, and this tradition applies to schools as well. Some elementary schools
also practice a ’nap time’ of several minutes after the lunch break. By the
way, my students fell asleep a couple of times right in the middle of a lesson,
and I had to force myself to wake up the poor little ones. 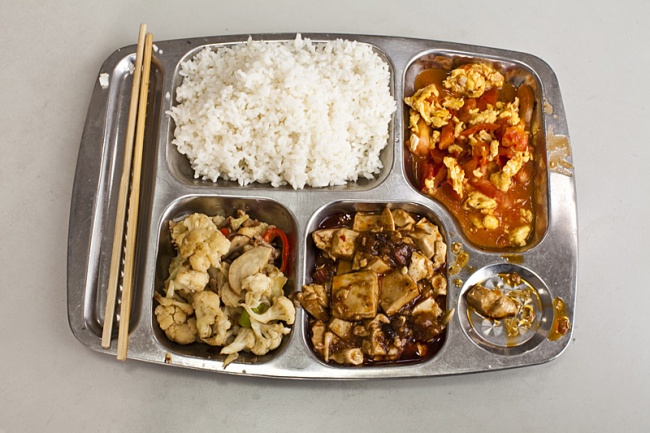 A
small, by Chinese standards, school lunch:
eggs with tomatoes, tofu,
cauliflower with peppers, and rice.
4. Teachers are treated with
great respect. They are always called by their last name with the ’Teacher’
prefix: for instance, ’Teacher Zhan’ or ’Teacher Xian’ or even just ’Teacher.’
At one school, students — both mine and others — gave a bow to me when we met.
5. Many schools take corporal
punishments for granted. A teacher may slap a student with his or her hand or a
ruler for some fault. The more distant and simple the school is, the more this
kind of punishment occurs. My Chinese friend told me that they were given a
certain amount of time to learn English words at school, and for every
unlearned word they got beaten with a stick.

A break between lessons with
traditional drums in the town of Ansai.
6. There is an academic ranking
poster hanging in each classroom which gives an incentive to study harder. The
grades go from A to F, where A is the highest grade equaling 90-100%, and F is
an unsatisfactory grade of 59%. Encouragement of good behavior is an important
part of education. For example, a student receives a star of a certain color or
additional points for a correct answer or model conduct, while talking during
lessons and misbehavior lead to a loss of stars and points. Students’ ranking
is updated daily and is visible to everyone on a special chart on the
blackboard — an open competition.

7. Chinese children study for
more than ten hours a day. Lessons usually start at 8 a.m. and end at 3-4 p.m.
Then kids go home and do their neverending home tasks until 9-10 p.m. In big
cities, schoolchildren always have additional lessons with tutors, music
classes, art studies, and sports clubs on weekends. The competition is so high
that parents suppress their children from a very young age — if they don’t
receive high grades in their school graduation exams (mandatory education in
China takes 12-13 years), there’s no way they’ll be admitted to a university. 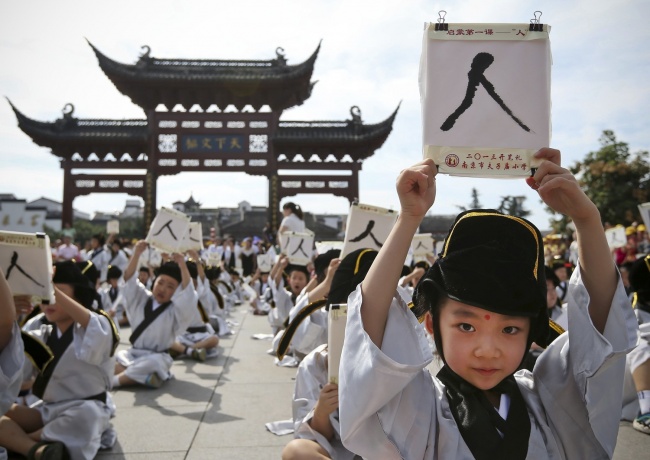 First-year students of Nanjing
Confucius School take part in the ceremony of drawing the ’zhen’ (’man’)
hieroglyph on September 1, which begins their studies.
8. Schools are divided into public
and private ones. The cost of studying at a private school may reach $1,000 per
month, but the level of education there is much higher. Learning a foreign
language is an especially important subject there. Two or three classes of
English a day, and students of elite schools already speak the language freely
in their fifth or sixth year. However, Shanghai, for instance, has a special
state-funded program that allows foreign teachers to work in ordinary public
schools.

9. The education system is based
on verbatim learning. Children just sit and learn lots of material by heart,
while teachers demand automatic reproduction without really caring about
whether their students actually understand what they say. However, there are
more and more alternative schools arising today, based on the Montessori or
Waldorf methods, that are aimed at developing the artistic abilities of kids.
Of course, such schools are private, and studying there is expensive and
accessible for very few people.

10. Children from poor families
who don’t want to study or are too naughty (as their parents think) often get
kicked out of ordinary elementary schools and into kung fu schools. They live
there with full board, they train hard from morning until night, and if they’re
lucky enough, they receive a basic education — they have to be able to read and
write, which is not easy, knowing the Chinese language system. Corporal
punishments are quite common at such institutions. 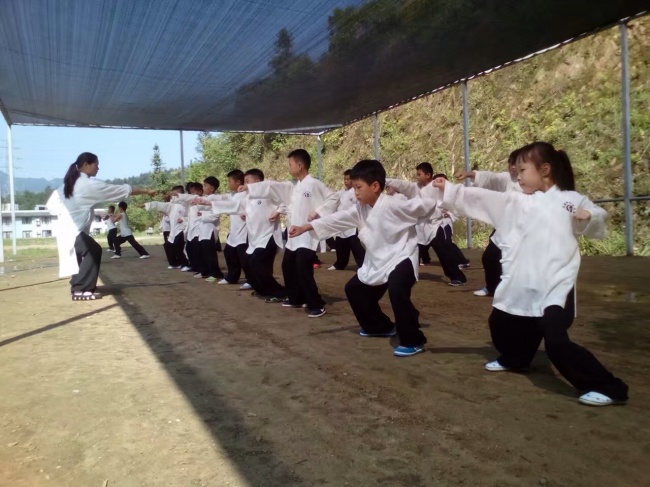 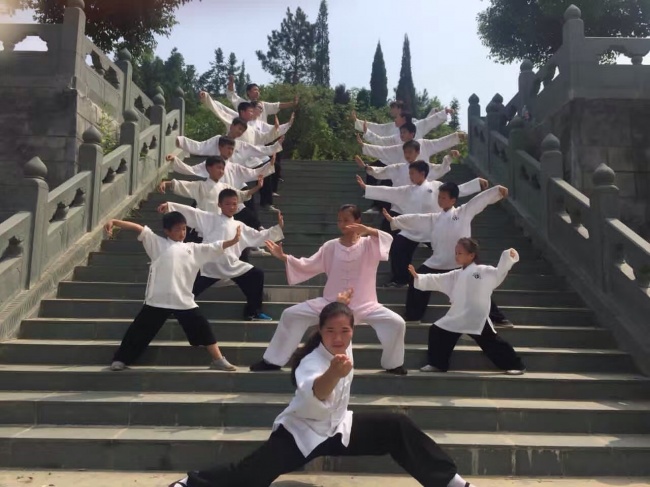 Kung fu school classes.
Teachers beat their students
with a stick sword or just slap or kick them. When the education is finished,
though, parents see a disciplined young man or woman with a right to teach kung
fu and a fair chance of having a career. Most well-known masters of kung fu
went through this very school of life. There’s also a widely spread custom to
send weak and sickly children here for a year or two to make them healthier
while literally living kung fu or tai chi. 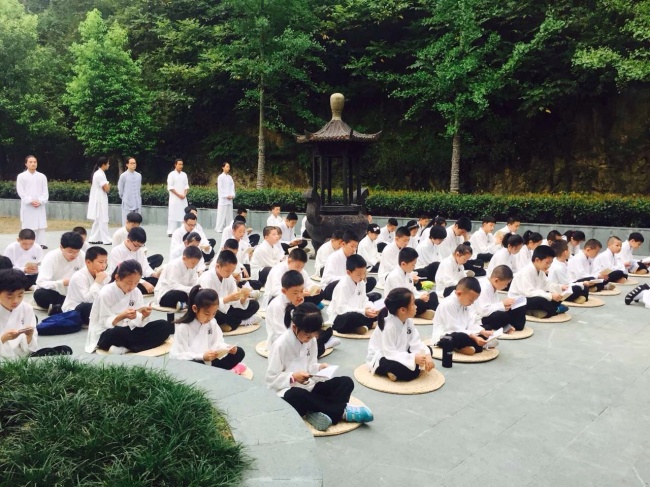 Wherever Chinese kids may
study, be it a kung fu school or an ordinary one, they adopt three principal
traits from early childhood: the skill of working hard, discipline, and respect
to those above them in age or position.
They are taught from a young
age that they should be the best at whatever they do. Maybe that’s why the
Chinese become leaders in science, culture, and art. Competition with
Europeans, who grow up in a much milder environment, is actually no competition
for them because we are not used to studying for ten hours a day, every day,
for many years. 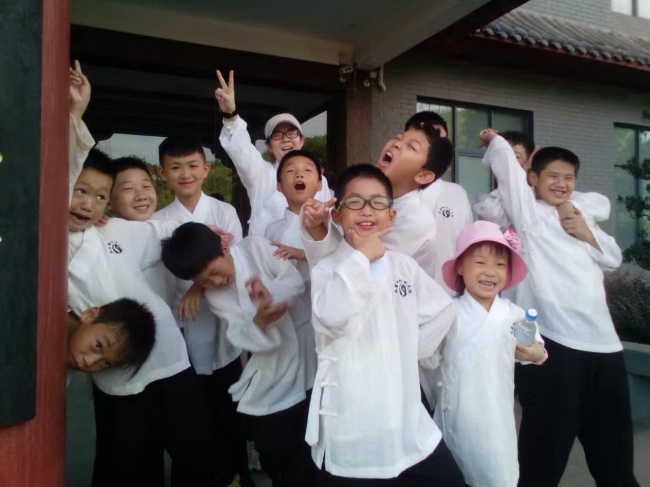