We think that there’s nothing
worse than the subway and buses at rush hour. But Kowloon Walled City citizens
wouldn’t agree with you. The city had a population density of approximately
1,255,000 inhabitants per sq km (3,250,000/sq m.) All in all, the city was
destroyed and there’s only a park left. Kowloon isn’t the only overcrowded
place in the world. And you’re about to see why.
Bright Side has found some
places where there are too many people. Have you ever been visited any of these
cities?
11.
The “Dead Sea,” China

Sichuan province has its own
dead sea that serves as an artificial reservoir and a popular resort. During
hot summer days, it turns into an overcrowded water park and its indoor pool is
considered to be the biggest in China. Once, there swam 10,000 people at once!
By the way, the pool covers 30,000 sq m.
But it’s not just a simple
artificial reservoir: the water’s composition resembles that of the sea and
contains 43 types of minerals and microelements.
10.
The Taj Mahah, India

This mausoleum attracts 7-8
million people a year. If you’d like to visit it, you have to remember that the
most popular months are the cool ones such as October, November, and February.
So we recommend planning your journey during other months.
You should also remember that
the Taj Mahal is closed to tourists every Friday — only Muslims are allowed to
visit it to pray. On the other hand, the complex is open for night viewing on
the day of the full moon.
9.
The Great Wall, China

The Great Wall of China is
also one of the most popular tourist attractions in the world. Each year,
around 10 million people visit it. In 2013, there were even more visitors —
10,720,000 people.
If you want to visit this
place and avoid crowds of people, choose the Jinshanling and Huanghuacheng
areas. They’re only partially restored but you can still explore them (don’t
forget to wear comfortable shoes.) These areas will allow you to enjoy
magnificent views without annoying people who don’t let you take a beautiful
picture.
8.
Piazza del Campo, Italy

Piazza del Campo is located in
Siena and it’s one of the most splendid medieval squares in the world. Twice a
year, the square changes its appearance: it turns into the Palio racetrack.
During races, up to 60,000 people visit the square.
Races are held on the 2nd of
July and the 16th of August and all citizens, as well as lots of tourists, come
to see this spectacular show. Of course, you won’t have a chance to walk around
but if you aren’t afraid of crowds of people and want to visit Palio, come in
advance.
7.
Tokyo subway, Japan 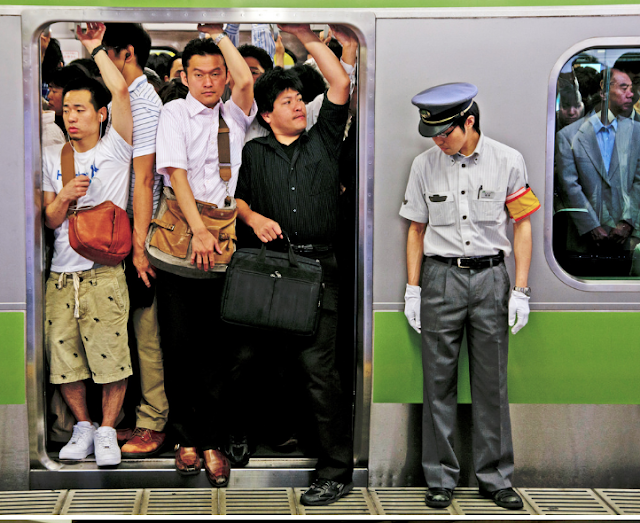 Of course, all subways are
terrible during rush hour but the subway in Tokyo is something special. For
example, Shinjuku station is listed in the Guinness Book of World Records as
the busiest transport hub in the world. More than 3 million people use it a
day.
There are employees called
“oshiya” who push people into a train and make sure their luggage doesn’t get
caught in the doors.
Try to avoid rush hours in
Tokyo: from 7 AM to 9 AM and from 5 PM to 7 PM.
6.
Christ the Redeemer, Brazil

Tourists aren’t scared of a
long way up and that’s why more than 3,000 people visit this famous statue a
day.
By the way, the pedestal of
the statue of Christ the Redeemer is quite special since it hosts a small
chapel where people can get married. If you want to visit this place, don’t
choose weekends, July, Christmas, and the Carnival. The best time is from
Monday-Friday (before 8:30 AM or after 3:30 PM.)
5.
Chichen Itza, Mexico 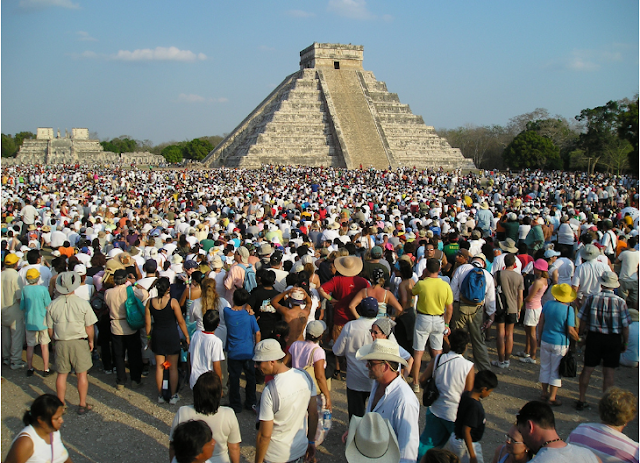 Chichen Itza was a large city
built by the Maya people. The Pyramid of Kukulcan (in the photo) was a place
where the Maya used to practice ritual sacrifices there and today, it’s one of
the most popular places in Mexico. Approximately 3 million tourists visit this
landmark each year.
To avoid crowds of people,
it’s recommended to come around 7:30 AM.
4.
Santa Cruz del Islote, Colombia 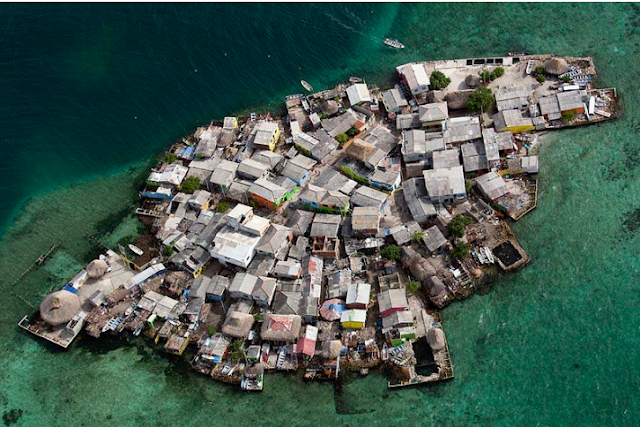 This tiny island is the most
densely populated island in the world: 1,200 people live there while the island
has a total area of just under one hectare (a football stadium). Santa Cruz del
Islote is an artificial island — its length is 656 ft and its width is 394 ft.
It can be accessed by ferry from the port of Tolu.
Taking into consideration its size,
we can understand that there’s no place for hospitals and other important
institutions. To study or work, inhabitants have to travel to the nearby
islands. The majority of people work in Mucura Island Hotels located on bigger
islands.
3.
The Mall of America, USA

The largest mall in the USA
attracts around 40 million people per year (one-third of all visitors are
tourists). 520 stores, a Nickelodeon Universe amusement park, a seaquarium, and
many other interesting things attract more people than Disneyland and the Grand
Canyon.
Before you go there, visit the
mall’s website to know when this or that store or park is open.
2.
Mong Kok, China

Mong Kok is an area in Hong
Kong with an extremely high population density of 340,000 per square mile. Mong
Kok was described as the busiest district in the world by the Guinness Book of
World Records. There are many places of entertainment and several universities
and school campuses.
Mong Kok is always overcrowded
but in July, February, and March, there are very many tourists, so it’s not
recommended to visit the area during these months.
1.
Borivali station, Mumbai, India

Mumbai is a huge city where
people are used to leading a hectic lifestyle. The city is always crowded with
citizens, especially the Borivali railway station. It’s the busiest station in
Mumbai and this is why the connectivity of transportation in Mumbai is made in
a way for people to reach different places easily. Though people use local
trains to travel and spend a lot of time waiting in lines in order to avoid the
traffic, the traffic on roads remains quite uncontrolled.
Do you want to add anything to
this list? Have you ever been to such an overcrowded place? Tell us in the
comments.
SOURCE:
BRIGHTSIDE