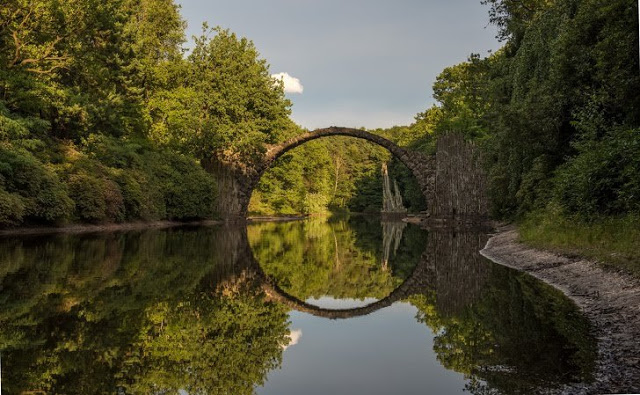 The Golden Bridge that was opened in Vietnam this year became the hit of theinternet within several days. Many people couldn’t believe that the construction depicted in many photos was real. And they are right because it’s really hard to imagine that there could be a mountain bridge located at cloud level and supported by 2 giant human palms.

Bright Side decided to remember what other unique and unbelievably fantastic bridges are there in the world.

1. On the hands, Vietnam 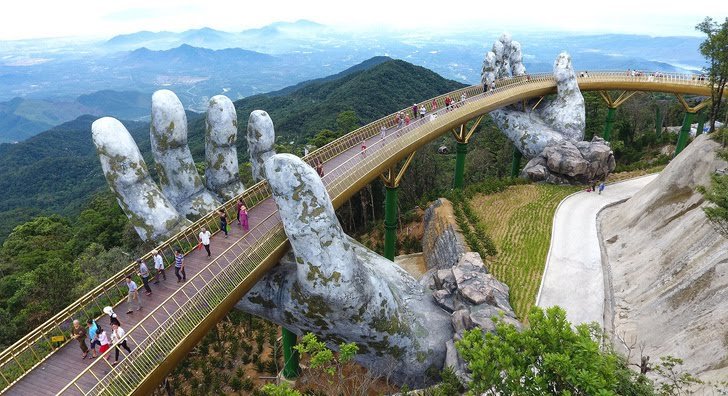 Golden Bridge has become the main place of interest in Da Nang City, Vietnam. It was instantly loved by visitors thanks to its unique construction — 2 giant hands support the bridge. Both hands look realistically ancient.

According to designers, there should be an illusion that the hands of God are lifting this golden strip right out of the ground. And according to visitors, these impressive sculptures amaze everyone with their design, the skill that was required to build them, and the ingenuity it took to execute this idea. 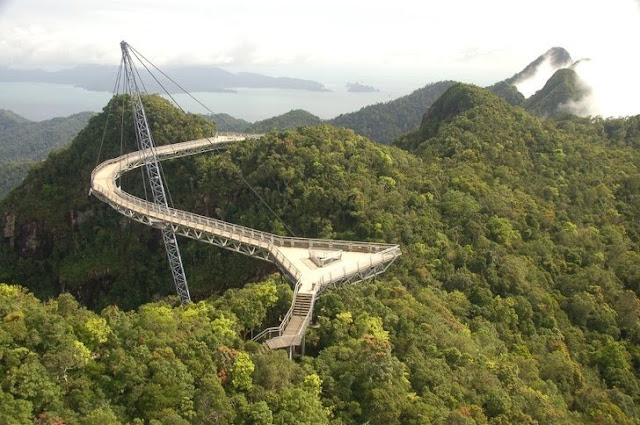 Sky bridge leads nowhere and doesn’t connect anything. It was constructed as part of an initiative started by the Malaysian government to attract tourists.

Thanks to its unique construction, the bridge is supported by only one steel pylon and 8 cables. It’s managed to fulfill its function and continues to attract many visitors. Also it regularly appears on lists of the best attractions of its kind.

3. Across the ocean, China 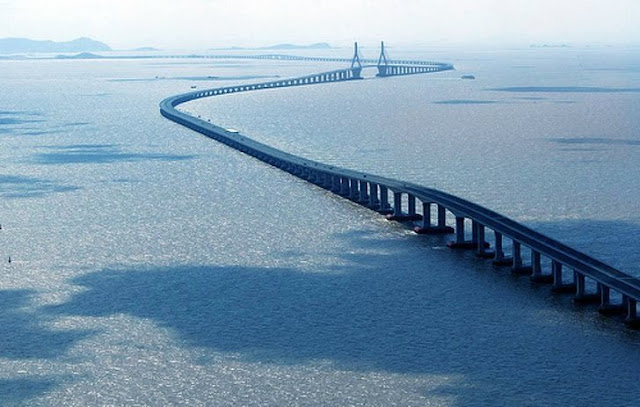 Donghai Bridge is one of the longest cross-sea bridges in the world. But the bridge acrossHangzhou Bay, also located in China, is a little longer than its brother.

The graceful S-shape of the bridge, which makes it look gorgeous in photos, was made for safety reasons. Unlike straight roads, drivers on this curvy highway must stay alert because they have to concentrate on turns.

4. Through a forest, Canada 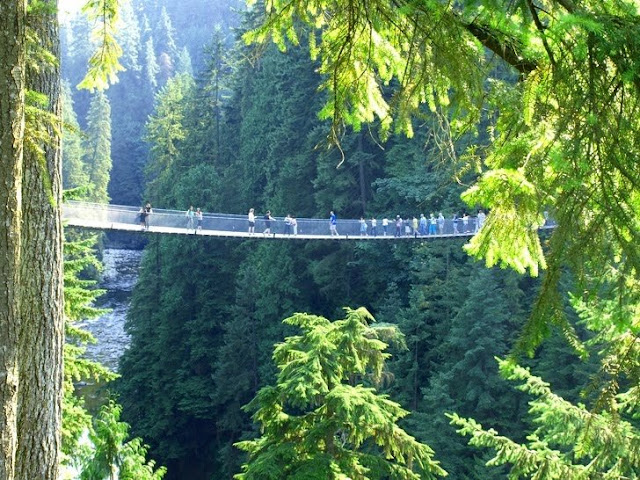 Capilano Suspension Bridge crosses a river with the same name, which was derived from the name of the leader of the Squamish Indian tribe, who were the indigenous inhabitants of this place.

The bridge is amazing because of the fact that a part of its route goesup to the level of the treetops, which brings this walk through the forest to another, more magical level. This feeling is even stronger at Christmas when the trees are covered with snow and lit up by many lights. 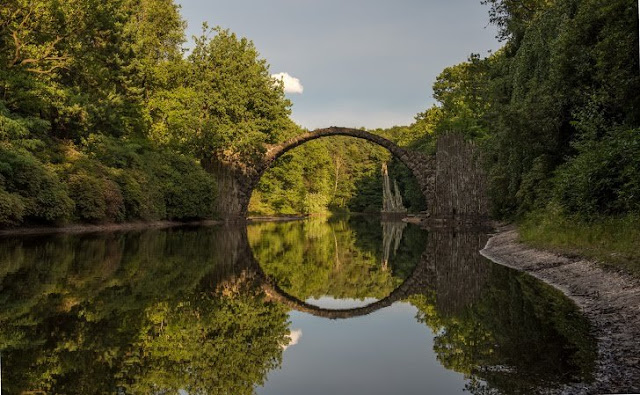 Rakotzbrücke Devil’s Bridge is famous for its arc that reflects in the water and createsa perfect circle from a certain angle. This place is surrounded by a mystical aura and the bridge itself can’t
be walked on.

The entrance to the bridge is closed not for mystical, but for safety reasons because itwas built for aesthetical and not utilitarian purposes.

6. Above the waterfall, USA 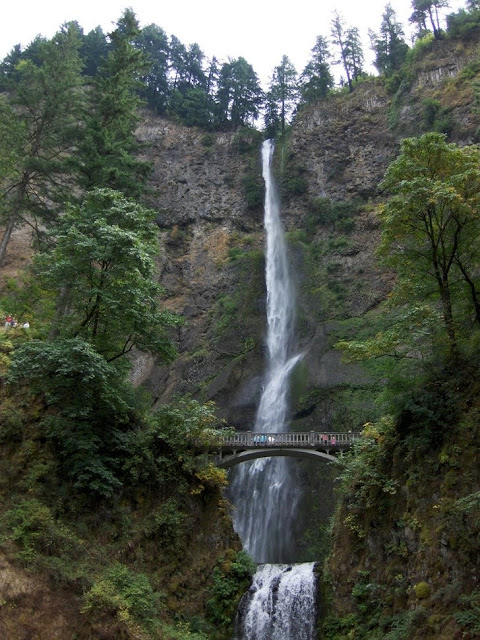 Benson Bridge is famous for its unique and picturesque location. It was built over the lower cascade of a large waterfall in order to provide the best view of the upper cascade.

According to an ancient Indian legend, Multnomah Falls appeared after the daughter of the leader jumped from the cliff sacrificing herself to the spirits for the sake of saving her tribe from a terrible disease.

7. On a waterfall, Norway 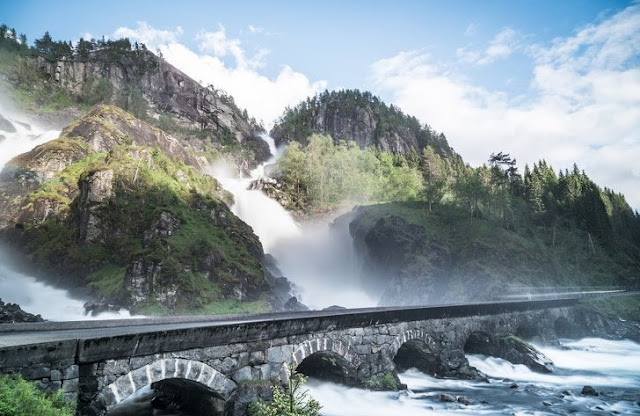 The Låtefossen waterfall is famous for the fact that it is actually 2 different waterfalls on the top, that unite at the bottom.

Right at the spot where the 2 flows become one, there is a part of the highway that passes over it. It’s located on a very beautiful and low arc bridge and the trips across this bridge usually end up being mesmerizing which is why this bridge is loved so much by tourists. 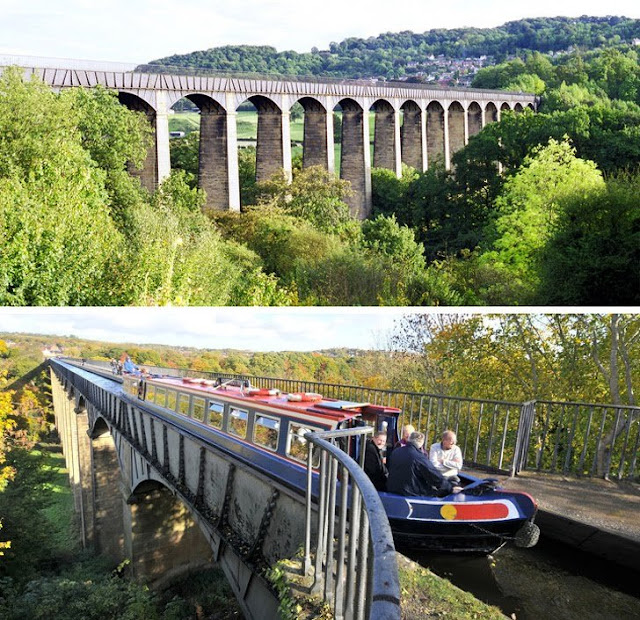 The Pontcysyllte Aqueduct, located in Wales, is part of a UNESCO World Heritage Site.

Having been built 200 years ago, this unique waterway has not only becomea masterpiece

of engineering but also an impeccable piece of monumental architecture. The fact that the aqueduct perfectly matches the natural landscape surrounding it was highlighted and outlined by UNESCO.
The most pleasant thing about this attraction is that visitors can take boat trips at the height of 125 ft. 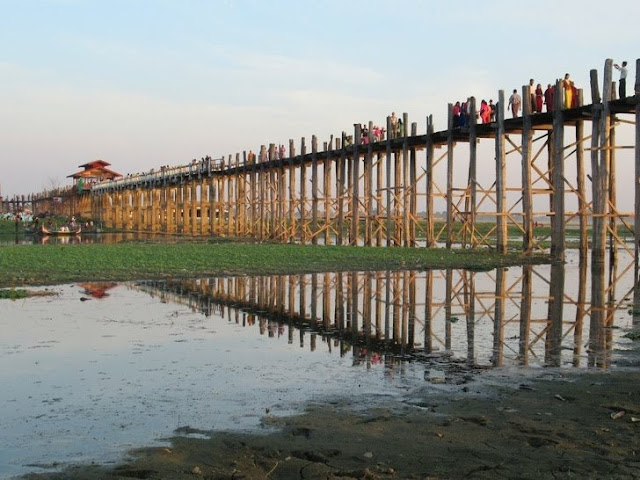 in the world, but officially, it’s not. Maybe the reason is in the fact that some wooden beams have been replaced with concrete pillars for safety reasons. Aside from the new pillars, this bridge has existed for almost 2 centuries, and the new fortification should not render this construction any less dignified.

The bridge is of great importance for local residents as it connects settlements during periods of flooding. And during the dry season, U Bein Bridge towers above the ground. 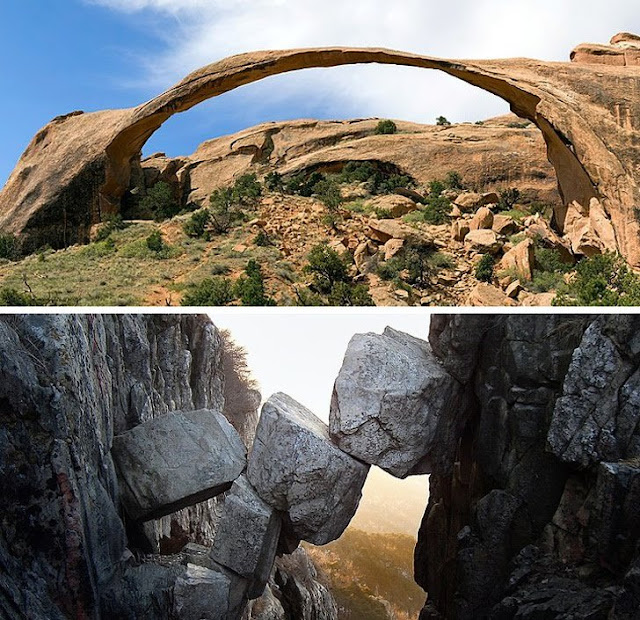 Bridges or arches created by nature are usually formed as a result of erosion from water and wind. But that is not the only method for the appearance of these miraculous bridges.

There is a place in the Tài Shān mountains in China where boulders surprisingly got stuck between the rocks. These boulders have continued to withstand attacks from tourists who dared to check whether this construction is really as strong as it looks. 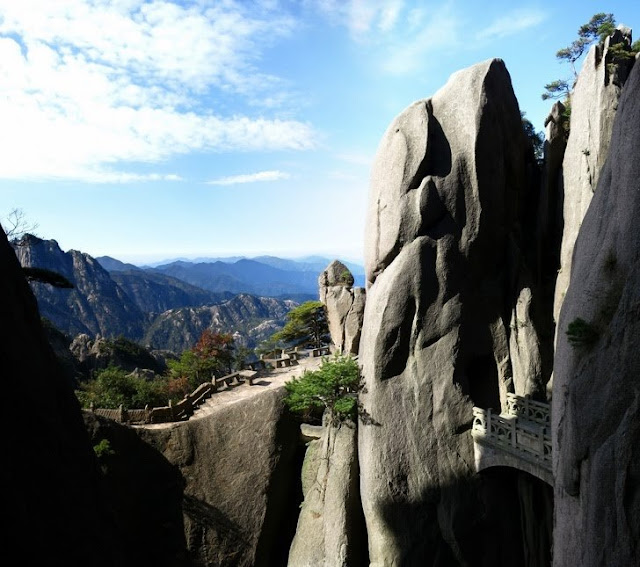 Despite the fact that the Fairy Walking Bridge was built recently, in 1987, it was designed so that looking at it people would get the impression that it’s the work of ancient masters or even mythical creatures from a fairy tale.

Not only is this bridge notable because of its perfect location among the rocks, but because of the rocks themselves. The Yellow Mountains in Huangshan are included on the UNESCO World Heritage list. It’s these fantastical views that inspired the producer of Avatar, James Cameron, to create the Na’vi world. 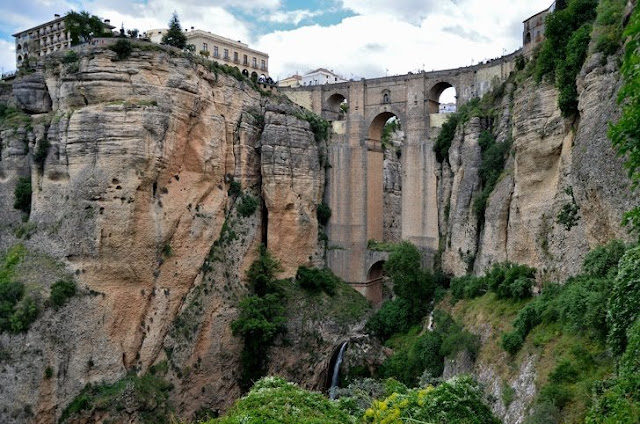 Puente Nuevo is translated from Spanish as “New Bridge,” but the original was actually built in the 18th century.

The old one-arch bridge was built quickly, lasted for 6 years and collapsed, taking with it the lives of about 50 people. That’s why the construction of the new bridge was taken very seriously and the process took 34 years. It still attracts tourists with its fantastical beauty.

13. Through a block of flats, China 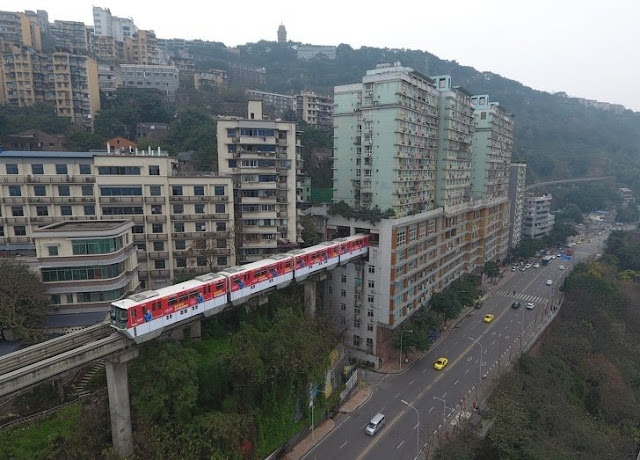 A high population density and the active development of the city of Chongqing in China dictate their rules for searching for creative transportation solutions. The unique monorail goes right through a block of residential apartments.

Residents say that this doesn’t disturb them because the noise level is no higher than that of a washing machine. Additionally, the commute to the metro has never been shorter. 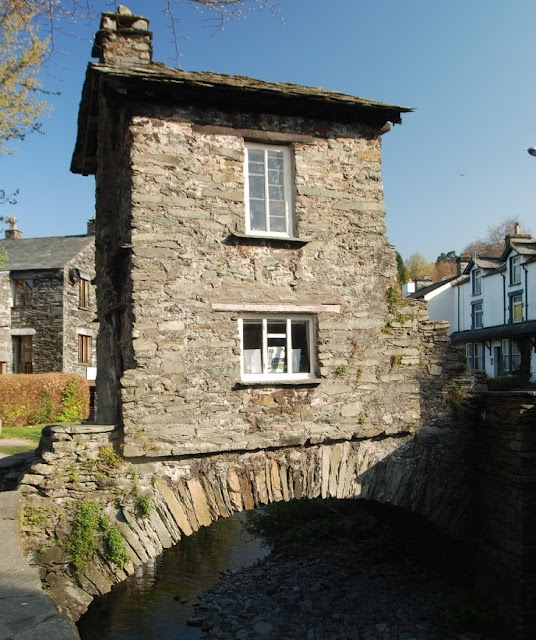 Residential bridges are very common in Europe and they are not just inhabited by vendors like the famous Ponte Vecchio.

There is a huge castle standing on a bridge in France — the Château de Chenonceau. While England has a tiny 17-century stone Bridge House that, as you might have guessed by the name, is also located on a bridge. Over the course of its existence, it has been a store, a workshop, and even
a home for an 8-person family. 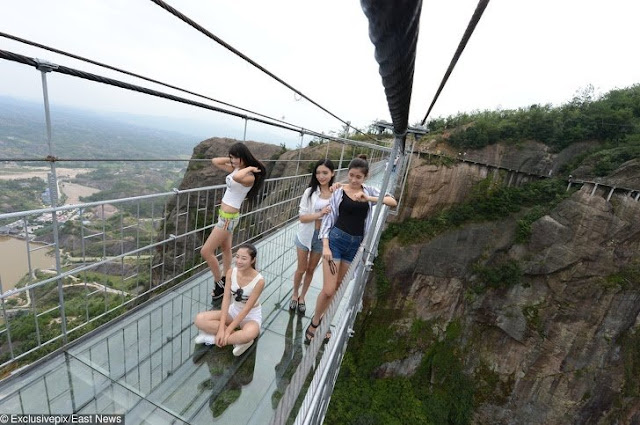 Zhangjiajie Glass Bridge was made to attract tourists to the region, as well as to check people’s bravery. The bridge has a transparent bottom, is located 850 ft above the ground, and it’s about 1400 ft long, which makes it one of the tallest and longest glass-bottom bridges in the world.

There is a special section where the bravest among us can try bungee-jumping from 870 ft, which will be the highest jump of its kind in the world. 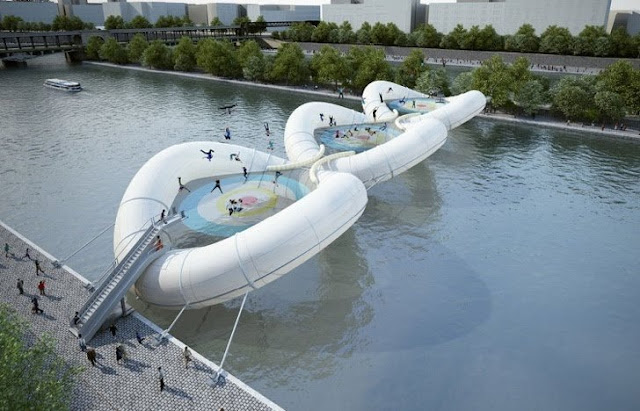 Perhaps, this bridge could be called the most unusual and original if it existed in reality. The picture only shows a realistically made concept of a trampoline bridge.

The project was created by the French studio Atelier Zündel Cristea for an architecture and design contest called ArchTriumph in 2012 and it took the 3rd place. It was never planned to be implemented in real life but the photos that got spread all over the internet fooled many people into thinking that the 3-arch bridge over the Seine River in Paris was real.

Which of these bridges would you like to visit? Please tell us about it in the comments!