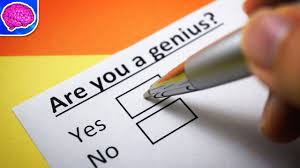 People with high IQs find it easier to keep time, research finds. This has nothing to do with being musical, just the simple ability to tap out a regular rhythm.
Good timing seems to be built in at a fundamental level to the brains of more intelligent people. Brain scans also revealed a link between high intelligence, ability to keep time and more white matter in parts of the brain linked to planning, problem solving and managing time.

Being a daydreamer is a sign that you are intelligent and creative, new research concludes. The result comes from a study in which over 100 people had their brains scanned while they stared at a fixed point for five minutes. The researchers wanted to see how their brains worked in unison when they were given nothing in particular to do. People whose brains worked more efficiently had greater intellectual abilities and also reported more daydreaming in their everyday lives.

People who appreciate dark humour are likely to be more intelligent, research finds. Those who prefer twisted comedy also score higher on tests of emotional stability.To get twisted humour, it seems you need to be laidback and clever. The reason intelligence may be linked to appreciating dark humour is that it can take a little work.

Disorders of mood could be the price some people pay for high intelligence, recent research finds. Psychologists have found that higher childhood IQ is linked to features of bipolar disorder in young adulthood. The research adds fuel to the debate over the connection between intelligence, creativity and mental health issues. Other studies now suggest a link between intelligence and mental illness that may go back into our evolutionary past. The increased intelligence of Homo sapiens was originally a result of gene mutations. The cost of these gene mutations, however, may have been an increase in mental illness (Nithianantharajah et al., 2012).

People with high IQs have stronger basic perceptual skills, research finds. For example, they can tell which way objects are moving more quickly. They are also better at blocking out background information to make their judgement. A higher IQ makes the brain faster at a fundamental level.

People of high intelligence are more prone to anxiety than those of moderate intelligence. Indeed, anxiety may have co-evolved with intelligence — worrying may have given early humans a survival benefit in the ancient past (Coplan et al., 2012). It’s just a pity that it’s left intelligent people with higher levels of anxiety disorders.

People with larger pupils have higher intelligence and the difference is visible to the naked eye, research finds. A larger pupil size reflects both a higher fluid intelligence and a greater working memory capacity. The pupils are the black part at the centre of the eye which dilate in response to changes in light. Psychologists have found they also respond to brain activity: the faster our brains are working, the more the pupil widens.

Set against the higher levels of mental illness and anxiety, is the fact that one of the signs of intelligence is being more likely to come up with new ideas.
Historically, that might mean rejecting superstition and finding new ways of organising society. One study argues that this explains why more intelligent people are more likely to be atheists and more likely to be politically liberal (Kanazawa et al., 2010). This study found that young adults who described themselves as ‘very conservative’ had an average IQ of 95, while those who described themselves as ‘very liberal’ had an average IQ of 106.

Taller people are more intelligent, research finds. The reason is that the genes that are correlated with height are also correlated with intelligence. The conclusion comes from a study of the DNA of 6,815 people. Of course, there are still people who are short and intelligent, plus those who are tall and dim. But, on average, there is a small association between being taller and having higher intelligence.

The more that intelligent people socialise with their friends, the less satisfied they are with life, recent research finds. The finding challenges the accepted idea that socialising generally makes people happier. It may be that for some people — especially those with high intelligence — socialising does not increase life satisfaction. The possible reason why is intriguing…

Another of the signs of intelligence is going to bed later and getting up later (Kanazawa & Perina, 2009). The study examined the sleep habits of 20,745 adolescent Americans and found that on a weekday the ‘very dull’ went to bed at an average of 11:41 and woke up at 7:20. In contrast, the ‘very bright’ went to bed at 12:29 and got up at 7:52. At the weekend the differences were even more pronounced.

People with higher intelligence are more likely to use drugs, research finds. The link is particularly strong for women. This is despite the fact that higher IQ is often linked to living a healthier lifestyle. The results can be explained in both positive and negative ways. For example, intelligent people are known to be more open to new experiences. At the same time, intelligent people are also more easily bored and may be more likely to be picked on in childhood.

Intelligent people are more likely to trust others, according to a new analysis of US public opinion poll data. This may be because more intelligent people are better judges of character. They found that people who were more trusting were also happier and had higher levels of physical health.

People with high IQs are more patient in financial matters, research finds. They are willing to wait longer to increase their money and to endure the risks involved. Intelligent people did not demand so much reward for taking the risk. It seems that intelligence, risk tolerance  and patience are closely related.

Lazy people are more likely to enjoy thinking, new research finds. On the other hand, those with who don’t enjoy it need to ‘do more stuff’ in order to escape their own thoughts. Previous studies have found that people who like to think more have better memories and often take more time to make decisions and end up making better ones.