WOMEN IN POLITICS: Chauvinism vs. Feminism?

45
Years after the Civil War: There Was Never A Country 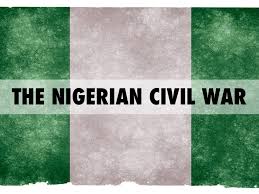 The
15th of January, 2015 marks the 45th anniversary of the
end of the Nigerian-Biafran civil war. The 30 months old war was fought between
the Nigerian forces mostly from the north against the Biafran militia which
were from south-eastern extradition.
The Federation of Nigeria, as it is known
today, has never really been one homogeneous country, for its widely differing
peoples and tribes.  This obvious fact
notwithstanding, the former colonial masters decided to keep the country one in
order to effectively control her vital resources for their economic
interests.  Thus, for administrative
convenience, the Northern and Southern protectorates were amalgamated in 1914 to
form the country – Nigeria.
Thereafter,
the only thing these people had in common was the name of their country since
each side had different administrative set – up which alone was an insufficient
basis for true unity.  Under normal
circumstances, the amalgamation ought to have brought the various peoples
together and provided a firm basis for the arduous task of establishing closer
cultural, social, religious, and linguistic ties vital for true unity among the
people.  There was division, hatred,
unhealthy rivalry and pronounced disparity in development.
The
growth of nationalism in the society and the subsequent emergence of political
parties were based on ethnic/tribal rather than national interests, and
therefore had no unifying effect on the people against the colonial
master.  Rather, it was the people
themselves who were the victims of the political struggles which were supposed
to be aimed at removing foreign domination.
At independence, Nigeria became a Federation and remained one country
but soon afterwards, the battle to consolidate the legacy of political and
military dominance of a section of Nigeria over the rest of the Federation
began with increased intensity.  It is
this struggle that eventually degenerated into coup, counter coup and the
bloody civil war. 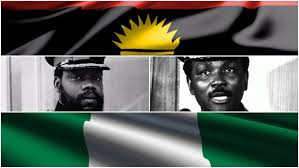 The Civil War
The
Nigerian Civil War broke out on 6 July 1967.
The war was the culmination of an uneasy peace and stability that had
plagued the Nation from independence in 1960.
This situation had its genesis in the geography, history, culture and
demography of Nigeria.
The immediate cause of the civil war itself
may be identified as the coup and the counter coup of 1966 which altered the
political equation and destroyed the fragile trust existing among the major
ethnic groups.  As a means of holding the
country together in the last result, the country was divided into twelve states
from the original four regions in May 1967.
The former Eastern Region under Lt. Col. Ojukwu saw the act of the
creation of states by decree “without consultation” as the last
straw, and declared the Region an independent state of “Biafra”.  The Federal Government in Lagos saw this as
an act of secession and illegal.  Several
meetings were held to resolve the issue peacefully without success.  To avoid disintegration of the country, the
central government was left with only one choice of bringing back the Region to
the main fold by force.
The
Federal side expected a quick victory while the Biafrans saw the war as that of
survival and were ready to fight to the last man. By August 1967, the war had
been extended to the Mid – Western Region by the Biafrans with the aim to
relief pressure on the northern front and to threaten the Federal Capital,
Lagos.  Both sides employed Political,
Diplomatic, Psychological and Military strategies to prosecute the war. By the
end of April 1969, after almost two years of bloody and destructive war, the
envisioned quick victory had eluded the Federal side, the rebel enclave had
been drastically reduced in size but the Biafrans were still holding on.  More peace conferences were held but none
achieved a cease – fire and an end to the war.
The Federals embarked on a strategic envelopment of the remaining
Biafran enclave.  By the Christmas of
1969, it was obvious that the end of the civil war was near.
The
self – acclaimed Head of State of Biafra, Lt. Col. Ojukwu, realizing the
hopelessness of the situation fled the enclave with his immediate family
members on the 10th of January 1970.  The
Commander of the Biafran Army who took over the administration of the remaining
enclave surrendered to the Federal Government on 14th January 1970 bringing an
end to the war, secessionist attempt and bloodshed. 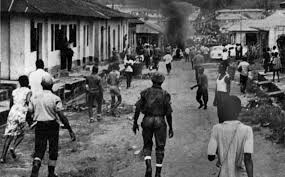 Post-War Nigeria
National
Re-unification – The civil war was able to re-integrate the country together. The
former Head of State, Late Gen. Yakubu Gowon in his formal speech to end the
civil war on the 14th Of January 1967 declared that, “For, as one
country, we would be able to maintain lasting peace among our various
communities; achieve rapid economic development to improve the lot of our
people; guarantee a dignified future and respect in the world for our posterity
and contribute to African unity and modernization.  On the other hand, the small successor states
in a disintegrated Nigeria would be victims of perpetual war and misery and neo
– colonialism.  Our duty was clear.  And we are today, vindicated.” One of the
bitter-sweet experiences of war is that the country was unified. We were able
to see our south-eastern brothers as friends and neighbors in serious need of help
and re-unification efforts were in full glare immediately after the war ended.
The
civil war helped in a great deal to bring the country together, immediately
after the war, rehabilitation efforts were hasten to ensure that the
devastating effects of the war were quickly alleviated. 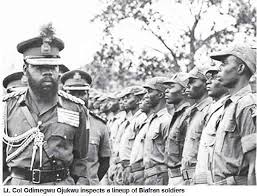 Present Day Nigeria
Regrettably,
45 years after the unfortunate event, the country is still confronted with myriads
of national problems of alarming proportions, regional loyalty as against
national interest is at the forefront of our collective challenges. Your region
and religion can make or mar you; they can influence your chances on your quest
for career advancement, job hunt and the choice of a life partner in this part
of the world.
Unfortunately,
“wounds heal but scars remain”, my brothers and sisters from the south-eastern
part of the country still believe that they have been short-changed and taken
for granted for too long, they believe that if the country is to remain one,
their preferred candidate has to be returned to the Presidential villa come May
29th, 2015. Whether his performance since the inception of his
administration is enough to get him re-elected is something we really need to
consider but that is not an issue for today. “He is witch hunted because of his background”; “they are only after him
because he is an Igbo man”. These are comments from his supporters mostly
from that part of the country
But,
the honest truth is that this country has a long way to go, unity and
togetherness are two things that have always been short in supply and we really
need to start seeing Nigeria has our collective inheritance. Fellow Nigerians, we
have to do all that is within our capacity to ensure that the country is one
big happy family.
God
Bless Nigeria
Olusanya
Oluwole Sheriff