15+ Places Only the Bravest Travelers Will Dare to Visit Antarctica is often called the White Mars due to its severe conditions. In 2005, the French-Italian polar station, Concordia, was built there. The European Space Agency (ESA) conducts research there. At the same time, almost 60 people live there in isolation, extremely low temperatures, and with a lack of light and oxygen. They’ve all gone through months of preparation to work there for no less than 9-12 months. The station consists of 2 cylindrical buildings: the first one is called “quiet” and it’s the place where all the labs, living rooms, and a hospital are located. The second one is called “noisy” and has the gym, storage area, dining hall, Movie Theater, and a rec room.

Bright Side will tell you about Concordia and how people manage to live there. 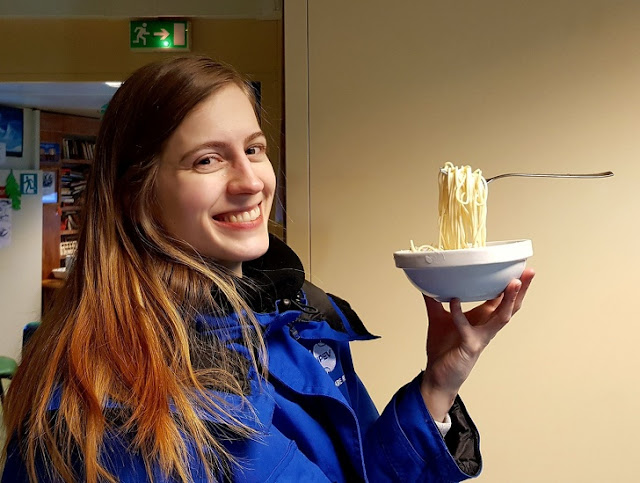 The temperature never rises higher than −20°F even during summer. Ordinary bacteria can’t survive there and to go outside people have to put on several layers of clothing, special shoes, puffy mitts, and glasses. All the clothes weigh just as much as a space suit.

Concordia is located at 2.050 miles above sea level which is why the air there is really thin and has a low level of oxygen. It is also so clean that it absolutely doesn’t smell of anything. After getting back to the mainland, researchers describe their shock with the overwhelming variety of smells.

2. People live in complete darkness for 4 months a year. 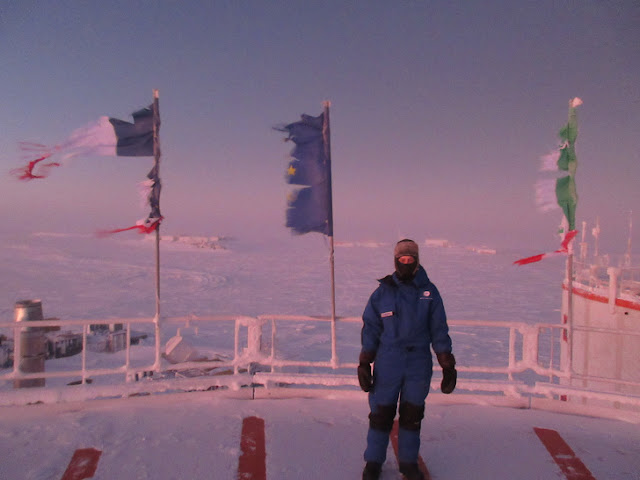 Antarctica doesn’t have nights and days as we know them: during winter, the sun doesn’t rise over the horizon, and people spend 4 months in complete darkness. During summer, it doesn’t go below the horizon. Due to this fact, circadian rhythms get messed up and sometimes it’s hard to fall asleep or eat something because feels like you’re eating in the middle of the night. The first rays of sunshine after darkness feel like a holiday: everyone drops what they’re doing, goes up the roof, and watches the sunrise for the first time in 4 months. 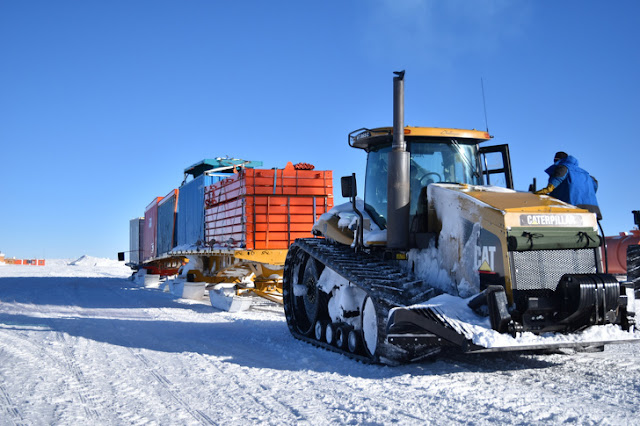 Concordia is located farther from civilization than the ISS and it’s not that easy to get there: large loads are brought by a caravan of sleighs (it takes 10-12 days), and smaller loads and food are brought by small planes constructed for the extreme temperatures.

Despite the fact that the nearest supermarket is located 2,500 miles away, it doesn’t mean that the researchers are put on a bread and water diet: they eat meat, fish, dairy, fresh fruits, and vegetables. The members of the international team love to cook traditional dishes like frog legs or borscht. Many products are kept frozen and eggs are covered in wax.

Alexey Ekaikin, a glaciologist from Russia, shares his “day in the life” of living at the station: “Today all the residents of the station received a newsletter that Concordia has run out of milk and we’ll have to use powdered milk until we get a new load. There’s no milk in the heart of Antarctica, too bad!”

4. During winter, the station is completely isolated from the mainland. 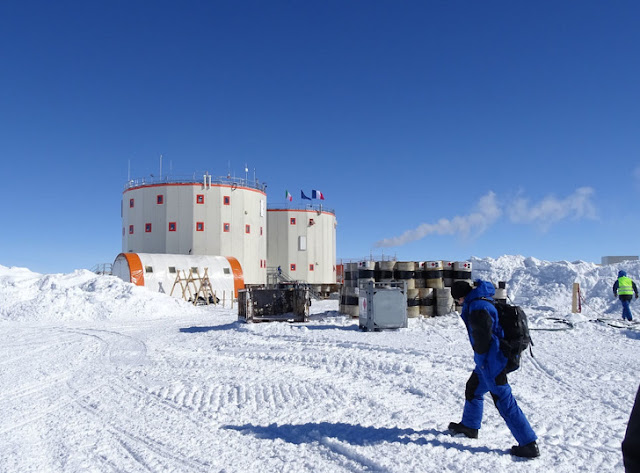 It’s impossible to leave Concordia during winter. There’s no connection with the mainland and, if something unexpected happens, you can only count on yourself. That’s why there’s a well-equipped hospital there and a big sector of the station is packed with food. The food is also stored in storehouses near the station.

Usually, around 15 people stay there for winter. Most of the ones who stay have 2 specialties, for example, a plumber could assist in the OR and a chef could also be a firefighter. 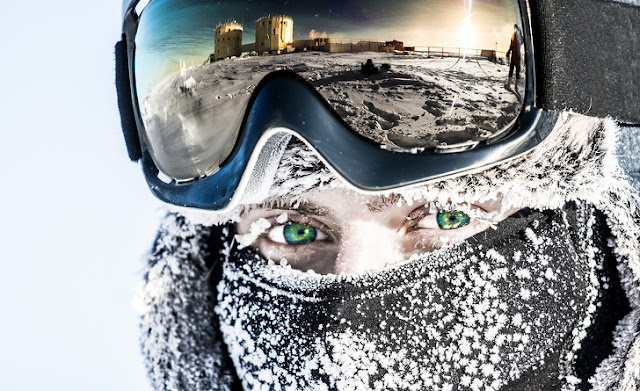 The feeling of a total isolation often leads to stress and various psychological difficulties — from absent-mindedness to depression and those things are properly studied there. Scientists believe that the knowledge gathered will prepare people for long space flights, improve space engines, and help figure out how to build the first Moon and Mars stations.

All team members have special digital diaries, wear special watches that document the times they sleep and work, and track how much time people spend with each other. After the data is collected, it’s properly analyzed to see if there are any changes in people’s behavior.

In addition to that, the station workers conduct more than 20 scientific projects: seismologists, astronomers, meteorologists, climatologists, physicists, and glaciologists work there.

6. People not only work but also have fun there. 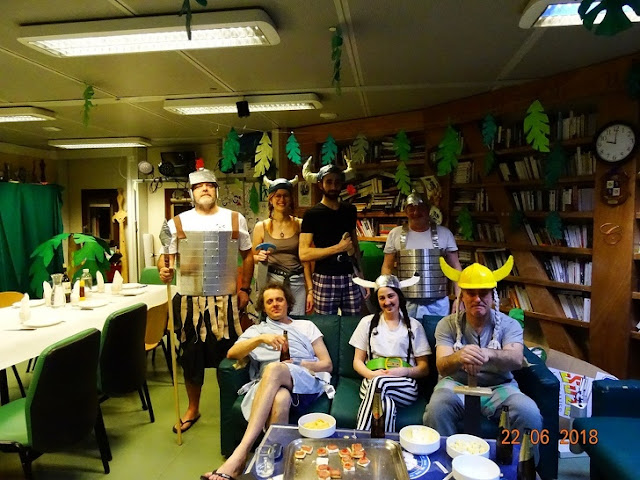 Station workers love interesting leisure time: researchers give tours of their laboratories, play basketball on the snow, and love dancing and costume parties. Sometimes the team uses video calls to answer school and college students’ questions, on Christmas they love to make a call to the president of Italy via Skype.

Many of them try to speak with foreign colleagues and practice their foreign language skills since the team there is truly international and consists of Swiss, French, Italian, English, and Russian people.

7. Peeing in the shower is banned at Concordia.

All the fresh water at Concordia is made of snow. They need a lot of fuel to melt it which is why they work hard to save water: after being used in the showers, the water is properly cleaned and delivered for reuse. This is why people can’t use their own soap and shower gel there: everyone is provided with a 3-in-1 shampoo that is compatible with the cleaning system. You also can’t pee in the shower because the system doesn’t cope with the recycling of human waste. If maintenance workers find an increased level of ammonium in the water, they make an announcement about it at a general meeting.

Would you dare to visit Antarctica? Share your thoughts with us in the comments.