It seems that there are so many cars in the world that even animals have to show people what alternatives exist. All jokes aside, this is the situation a family from Melbourne had to deal with. After a walk, they found a baby possum nested in their dog’s fur. For unknown reasons, this baby decided to hitch a lift on its back, and we can’t help but tell you about this story.


Read and enjoy this Bright Side finding, and we promise that the end of the story will surprise you.

This isn’t something you get to see every day. That’s why Sally and Jon Watkinson were pretty dazed when they found a tiny animal attached to one of their Puli dogs. In their Facebook post, they admitted that, surprisingly, their dog barely noticed it was there. It wasn’t barking frantically or showing any other signs of annoyance.

The couple contacted a wildlife rescue center and walked the dog with the baby animal attached to a nearby vet. According to the post, the possum appeared to be a girl who is doing well now. She will stay with a caretaker until she’s well and old enough to be released into the wild.

But the story doesn’t end there. Sally and Jon had to go back to the vet one more time. And this “almost made the vet nurse fall off her chair.”


Because the same thing happened again the next day. A new baby was attached to the dog’s back. This one appeared to be a boy who is also going to be just fine.

While we don’t know the exact reason for this behavior, it’s possible to assume that these scared babies lost their mother and found comfort in the dog’s thick fur. Or maybe, as we’ve already said, this possum family has found a convenient way to travel. We also have another theory: Maybe animals just like to ride on other animals to show their dominance, and this is what our bonus section is about.


Bonus: More animals who dared (or at least tried) to take a similar ride. 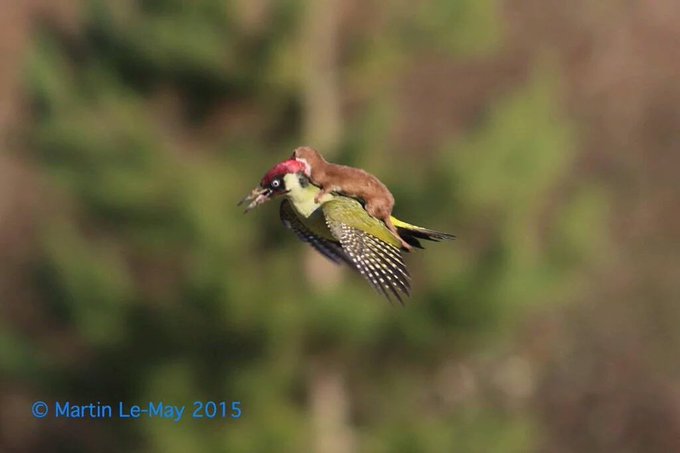 Have you ever found anything unexpected on your pets?