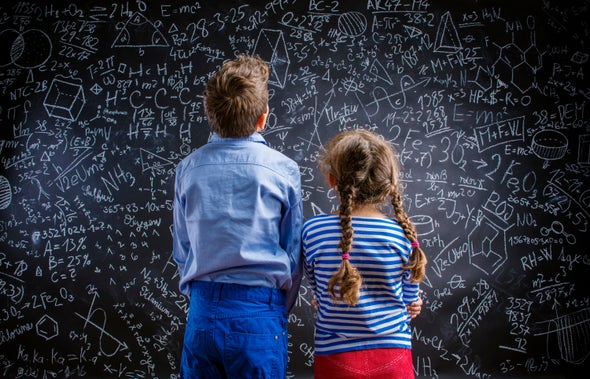 Think back to your school days and conjure up an image of the archetypal maths-whizz: striding ahead of the rest of the class, solving problems with ease, clearly destined to be a mathematician, physicist or engineer later in life.


Chances are that person was not female, and considering how few women occupy the top spots in maths-based professions, your memory is probably accurate.

Explaining this disparity between men and women has been the source of considerable controversy. Former President of Harvard, Larry Summers, argued that one reason men do better in maths-related fields is because they have a superior innate ability. Summers, of course, was forced to resign in 2006 after his public endorsement of this view caused a furore.


On the other side of the debate are figures like Elizabeth Spelke, Professor of Psychology at Harvard University, who argues that the differences at the top levels of maths and science are rooted in social factors.


Boys are better than girls at maths – aren’t they?


Whichever side you lean towards, the widespread assumption has been that there is a difference in mathematical achievement that needs explaining. Research has shown that both parents and teachers commonly hold this belief. Indeed research on thousands of SAT scores published in the 1990s backed this up: for complex problem-solving males had a significant advantage over females in the general population, especially at the high end of the distribution.


Confirming this theory, studies show that when women are reminded of the stereotype, they actually do perform worse in maths tests. So we end up with a self-fulfilling prophecy.


This is exactly the kind of social factor to which Elizabeth Spelke is referring. And if Spelke is right then when social conditions change, so should the difference between men and women on mathematical reasoning ability. Could it be that women have been hamstrung by a self-limiting belief?

To find out let’s fast-forward a decade or two. Women are now no longer encumbered with the same restricting stereotypes they once were. Certainly all is not rosy in the garden of gender equality, but major strides forward have been made.


Just as in other aspects of society, these strides can be seen in mathematics. At school girls now study calculus alongside boys and later go on to earn almost half of all undergraduate degrees in mathematics in the US. Still, this data is circumstantial – what we need to know is how young boys and girls are doing right now at school – young boys and girls who are not exposed to the same extreme gender stereotypes as previous generations about who is good at maths.


In a new study published recently in Science, Professor Janet Hyde and colleagues may have spotted the first signs of change. They used data from around 7 million US children in 10 US states from grade 2 through to grade 11, routinely gathered as part of a national assessment exercise. They wanted to find out if boys are still performing better than girls at maths.


What they found was that in marked contrast to earlier research, there was little or no difference in maths performance between girls and boys in all of the 10 states. In some states girls performed fractionally better, on average, than boys, and in other states this trend was reversed.


“There just aren’t gender differences anymore in math performance,” says Professor Hyde. “So parents and teachers need to revise their thoughts about this.” This result brings an impressive weight of numbers to bear on this question and helps challenge the widespread belief that boys are more gifted than girls at maths – whether as a result of nature or nurture.


Perhaps, though, girls are now doing better at maths because of a greater gender equality in society – discovering a talent previous generations were told they didn’t have. Yet not everyone is convinced that we will see women rise to positions of eminence in the currently male-dominated worlds of mathematics, engineering and physics.


Many have argued that men’s and women’s abilities in maths may well be comparable on average, but that the specific individuals who go on to become great mathematicians, physicists and engineers are rarely average. The argument has been that these talented individuals who lie at the extreme end of the bell-curve distribution of mathematical ability are more often men. It’s this extra talent at the extreme high end of ability that is thought to account for the fact that men dominate in fields that require advanced maths skills.


Professor Hyde’s study also addresses this question, and once again her data questions the assumption. She sliced and diced her sample of students down to focus just on performance on the most difficult types of problems. If the prediction was right that the best boys can outperform the best girls, then this difference should emerge in their data. Again, though, the differences between boys and girls, even on the hardest questions, were small.


This study won’t end the debate, though, because as Professor Hyde points out, even the hardest questions on this test are still not complex enough to stretch the most talented students and really uncover whether a gender difference exists at the extreme end of the distribution. Other studies continue to find that at the more gifted end, boys outperform girls in maths.


Mathematical ability might be yet another difference that turned out to have less to do with nature, and more to do with nurture.1 In a recent survey of the literature on sex differences in maths and science, Diane Halpern, a past-president of the American Psychological Association, and colleagues found that success in maths and science careers was predicted by a complex web of factors. These included biological constraints, the cultural context and educational policies. While biology is in the mix, it’s far from king of the hill.


Although Hyde’s study could have identified the vanguard of change in challenging stereotypes, we won’t see the evidence before our eyes until women begin to believe in their ability. Who knows, perhaps in a few generations we’ll see just as many female theoretical physicists as male. Unfortunately, as Professor Hyde points out: “Stereotypes are very, very resistant to change, but as a scientist I have to challenge them with data.”


1. On 78% of psychological variables the differences between men and women are either small or zero. The three main areas of difference identified by Professor Hyde in previous reviews of the literature are sexuality, aggression and motor performance.