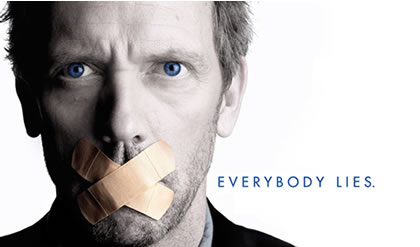 Do people really lie 3 times within 10 minutes of meeting someone new?


It’s a statistic often quoted to show how callous and heartless people are. It’s the kind of number the misanthrope TV doc Gregory House (played by Brit Hugh Laurie) should have tattooed across his forehead.

But what kinds of lies are people telling? Are they covering up dastardly crimes or just oiling the social wheels? To find out let’s have a look at the original research this number is based on.


Feldman et al. (2002) told 121 participants they were going to have a chat with someone new for 10 minutes. Then half were divided into 3 groups, each with different goals from the conversation:

All the participants were secretly videotaped during the conversation then, afterwards, asked to point out their own lies. They were told that lies include things like falsely agreeing with others and the misrepresentation of feelings. Then, while watching the video, they wrote down all the instances of their own lying.


The tangled web we weave


The very first thing to say is that 40% of people claim to have told no lies whatsoever. Whether you believe them or not is a different matter, but it’s probably not that far from the truth, after all there wasn’t that much motivation to lie in the first place. It was just a bit of chit-chat in the lab, it’s not as if they were trying to cover up a murder.


The other 60% did report some lies, though, with the average number being just under 3 in the 10 minutes. The lies they told were categorised as either subtle, exaggerations or outright lies. The most popular category of lie was the outright lie.


Lies were also categorised as to whether they were self-oriented or other-oriented with men telling more self-oriented lies than women. Overall, though, men and women told about the same number of lies, contrary to the popular conception that men are bigger liars than women.


As you can see the most popular category was feelings which, in this study, included lies about emotions, opinions and evaluations. Lies about feelings were particularly pronounced when women wanted to appear competent and when men wanted to appear likeable. This is a well-known finding: people are often found to lie more about their feelings than anything else.


Lies about feelings are interesting because they are not something we prototypically think of as outright lies. For example when I meet you I might ask: “How are you?” and you might reply “Fine” when actually you feel like crap. Technically that is a lie. But there is also a social convention at work here; especially if you’re a stranger I’ve just met. You understand that I don’t want to know exactly how you are, it’s a social nicety.


The question is: what is the moral dimension? The kind of lies we find most detestable are those with a malicious intent of some kind: lies designed to swindle or hoodwink us, lies that will cause us some pain down the road. Yet many lies about feelings are motivated by the exact reverse, they are quite often pro-social lies.

In this study we could just as easily argue that all the apparently ‘bad’ lying people are doing may well be of the ‘good’ pro-social sort. This may be especially true in the motivated goal conditions where people are managing their self-presentation to oil the social wheels.