The best eyeshadow color to make your eyes pop

It seems like every day
there’s some new beauty trend buzzing around on social media. We’ll admit,
sometimes beauty trends are way overdue. For instance, fuller eyebrows — the overplucked
brows of the ’90s and early 2000s weren’t doing us any favors. Other times,
they’re just so weird you have to see them to believe them. Here are some of
the most bizarre beauty trends currently circulating on social media. But
considering the way trends go, these could be out of style just as fast as they
came in style.
Neon
eyeliner 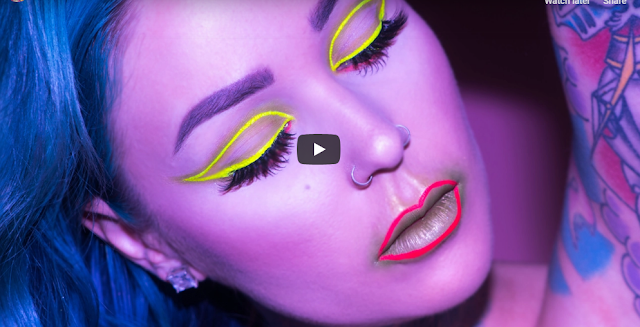 Now, to be perfectly honest,
neon eyeliner doesn’t sound too weird in theory. Highlighter is all the rage
for brightening up parts of our complexion and I’m all for bright things, so
why not brighten up my eyes too? Even though it may look like neon eyeliner
makes your eyes really glow, it’s — like many things in the makeup world — just
an illusion. All it takes is some crisp white eyeliner, bright eyeshadow, a steady
hand, and some patience. It’s even something you can do on your lips! So the
next time you need a look that really brightens up the room, you know exactly
how to do it.
Lollipop
lips

I don’t know about you, but
one of the things I strive for when it comes to doing my makeup is to avoid
looking like I did when I applied it for fun as a young kid. But the
“lollipop lip” trend even takes its name from something you’d see on
a small child. Think about the last time you saw a kid with a lollipop. Chances
are, that sugary, artificially colored goodness ended up all around her
mouth.
That’s exactly what the
lollipop lip trend is going for. Not only does Huffington Post point out that
this is probably not great for your pores, I’d be willing to bet that it
happened as a mistake the first time. My guess is that a hot and heavy makeout
session soon followed by a photo before the person had a chance to fix their
lipstick somehow led to “No, that’s totally the new trend,” and it
somehow caught on. Beauty gods, help us all.
Glitter
roots

Sometimes life gets busy and
you just don’t have time to make it to the salon to touch up your roots. I get
it. Even with the best balayage, you can only go so long before the only thing
that’s going to get your hair back to looking normal is a dye job. Unless you
have some glitter on hand, that is. After all, glitter is going everywhere
these days. Just attach some to your hair right at those problem roots and
you’ll go straight from drab to fab!
It isn’t just reserved for
hair mistakes, either. People reported that this trend popped up on the runway,
and even Kendall Jenner sported the look in 2016! Now, you can find glitter
roots on brides at their bachelorette parties, in the part between braids,
to add a sparkly pop to halloween costumes, and pretty much everything in
between. You do you.
Nose
hair extensions

Yes, you read that right — and
it’s just as bizarre as it sounds. Gone are the day of nose hair trimmers. Gone
are even the days of letting your nose hair be natural. We seem to have entered
the era of nose hair extensions. To be fair, this one started as a joke, but
that hasn’t stopped it from trending. If you’re wondering how in the world you
go about getting nose hair extensions, you’ll either be relieved or horrified
to know that they’re false eyelashes either applied around the nostril or
shoved right up in there. I think we’ll pass on this one.
Braided
eyebrows

The braided eyebrows trend is
one of the ones that started with someone’s Photoshopping skills and evolved
from there. This took over after the squiggle brow trend and, while most people
(no people?) don’t have eyebrows that are long enough to actually braid, Photoshop
works wonders. Some beauty bloggers, however, decided that Photoshop is just
too much work so why not stick to what they know? If you’re good with makeup
and have some extra time on your hands, give this one a go. I’d personally
probably be better off trying to learn Photoshop. Or, you know, just leaving my
eyebrows alone.
Glitter,
glitter everywhere!

Glitter roots are one thing,
but hair isn’t the only unexpected place that people are putting glitter. It
seems like this particular glitter trend is not only used to hide things you’d
rather not deal with (hello, not having time to shave your armpits), but it’s
also great for highlighting your, um, assets. From booty bling at festivals and
events to glitter in lieu of a bra, who knew that sparkly little flakes were so
versatile? While glitter seems to attach itself to everything in its path and
never let go, I don’t know whether I’d be confident enough in its sticking
ability to use it to cover certain areas, if you know what I mean. Sparkly is
one thing, flashing is another.
Ear
makeup

This beauty trend has been
around since 2014, according to Marie Claire, which makes me think it might
stick around for a while. I don’t get it, but it is what it is. It involves
exactly what it sounds like, putting makeup on your ears, either just in part
or on the entire ear.
I can understand (maybe) the
desire to make your ears a bit more interesting and I get that not everyone
wants to wear earrings, but in the time since I’ve learned about this trend,
I’ve noticed just how often I touch my ears. Whether it’s tucking my hair
behind them, scratching an itch, or maybe even touching them because I’ve
been thinking about this trend, it’s clear that I touch them way too much to
ever allow ear makeup to last more than just a few minutes. But hey, it looks
pretty neat, I guess.
3D
lip art

Makeup is certainly magical
and this bizarre trend is taking the term “makeup artist” to a whole
new level. We all know that it takes a lot of patience and ability to perfect
your makeup, but for some people, it isn’t just about hiding dark circles or
making their cheekbones pop. Lip art, particularly of the 3D variety, is all
the rage. Sometimes it’s done with just makeup and illusions, and other times
it includes things like mini pearls and sequins to enhance the look. I can’t be
the only one to wonder what happens when you need to eat or drink! I’m
lucky if I can get my lipstick right when I’m just going for a little color.
Faux
freckles

My mother is a natural
redhead, which means I’ve been blessed with an abundance of freckles, including
on my face. I’ve never been someone who tried to get rid of my freckles with
lemon juice and whatnot, but I’ve also never encountered anyone who went to
great lengths to have freckles. That may be changing. Apparently anyone can get
that freckled look without ever getting out in the sun. Whether they’re
achieved with makeup like brow pencil or permanently etched into the skin
through tattooing (really!), freckles are clearly in.
Bottom
falsies

There’s no denying that false
eyelashes can help make a big statement. They’ve become pretty commonplace with
people even having extensions professionally applied to last for weeks.
I’m probably one of the few remaining people who has never tried false
eyelashes (even the kind you can pick up at the drugstore). Apparently even the
false eyelash trend has evolved — it now includes false bottom lashes. This
bizarre beauty trend certainly makes for a dramatic look, but I can’t wrap my
head around how it must feel to have such long lashes on top and bottom. Then
again, my lashes are so short they’re virtually nonexistent, so maybe I just
need to give it a try.
SOURCE:
THE LIST