Arm yourself with impeccable
style at your next meeting 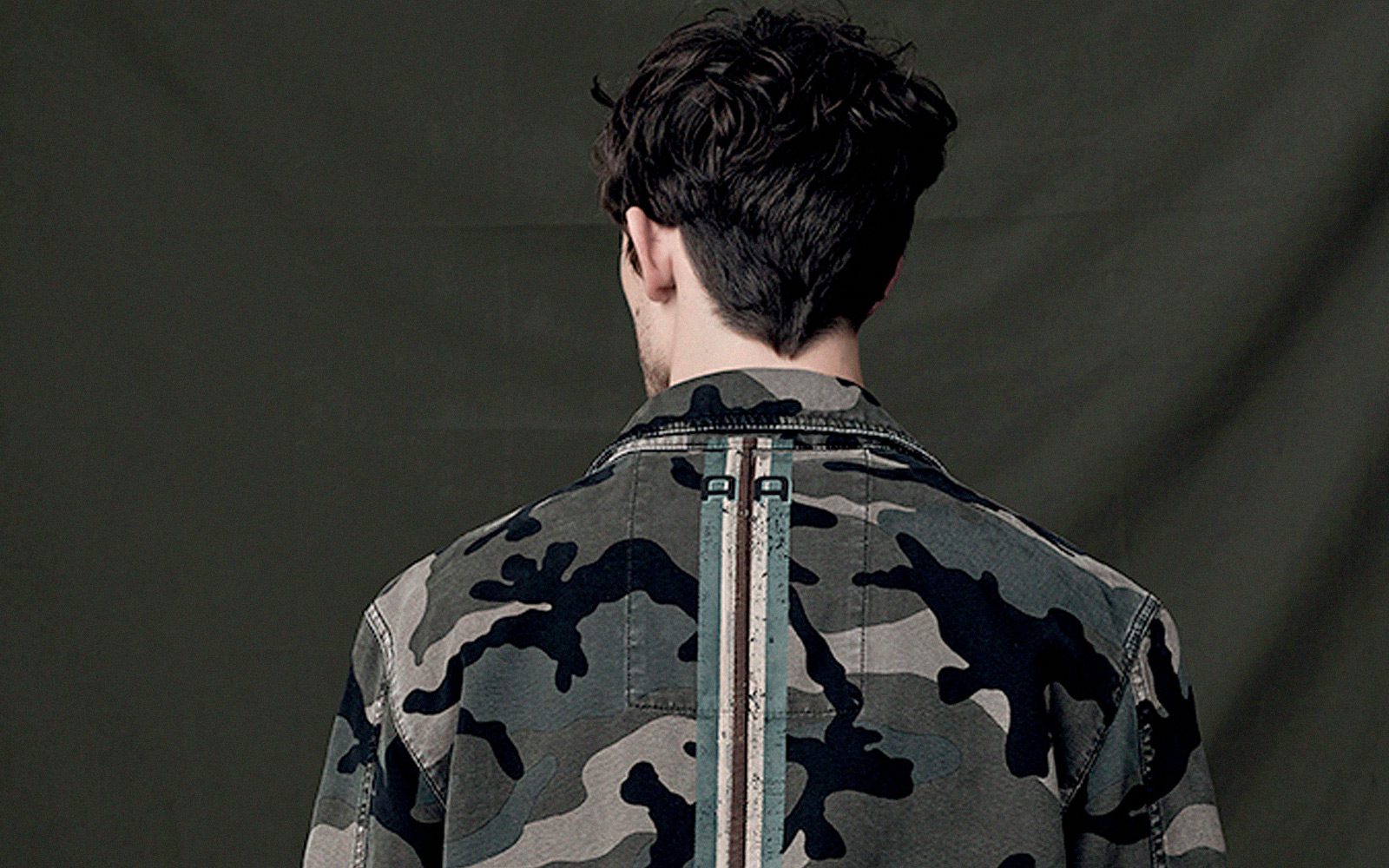 A friend told us this story of
a lawyer with a spider tattooed to his wrist. His ink was hidden beneath a
sleeve most of the time. But when questioning someone on the stand, the lawyer
would flicker his wrist as an intimidation tactic, revealing a flash of the
deadly vermin hiding beneath his suit. Sometimes an ever so subtle accent of
aggression can be convincing, and we dig it.
For a pattern designed to keep
people out of sight, camouflage print is easier to spot than ever. The rugged,
masculine, and sometimes divisive pattern has been making comeback waves on the
runways of New York and Paris, city streets, and in your Instagram feed. Just
ask Jay-Z, Kanye West, Nas, Justin Bieber, or any celebrity who — despite
cladding themselves in camo cargo pants, jackets, and more — can’t hide from
the cameras (not that they’re trying to, of course). 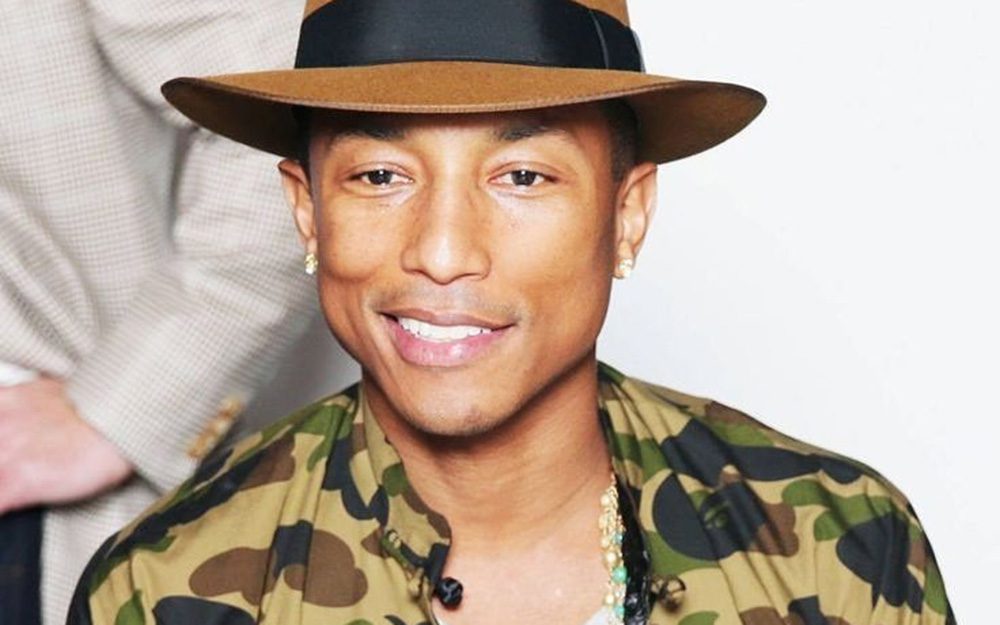 Camouflage is not a
conventionally attractive print — blotchy shapes and muddy colors don’t tend to
be a go-to. But that may be why we love it. In this guide, we’re going to show
you how to bring a bit of street and militance into your professional wardrobe.

How To Style: Camouflage Print
For Professionals


Camo trends have obviously
changed over time. From purely functional battle garb, to cringe-worthy pop
star outfits in the early 2000s (NSYNC, we’re looking at you), to today’s top
streetwear brands like BAPE and Supreme. Now, at the tail end of the 2010s,
when everything old is new again, there’s never been a better time to
incorporate the legendary pattern into your look. In today’s world of personal
branding and digital thought leaders, you can even bring a flare of funky print
into professional settings. Be gone, stifled three-piece-suits and paper memos.

Complement the Classics For
Your 9-to-5 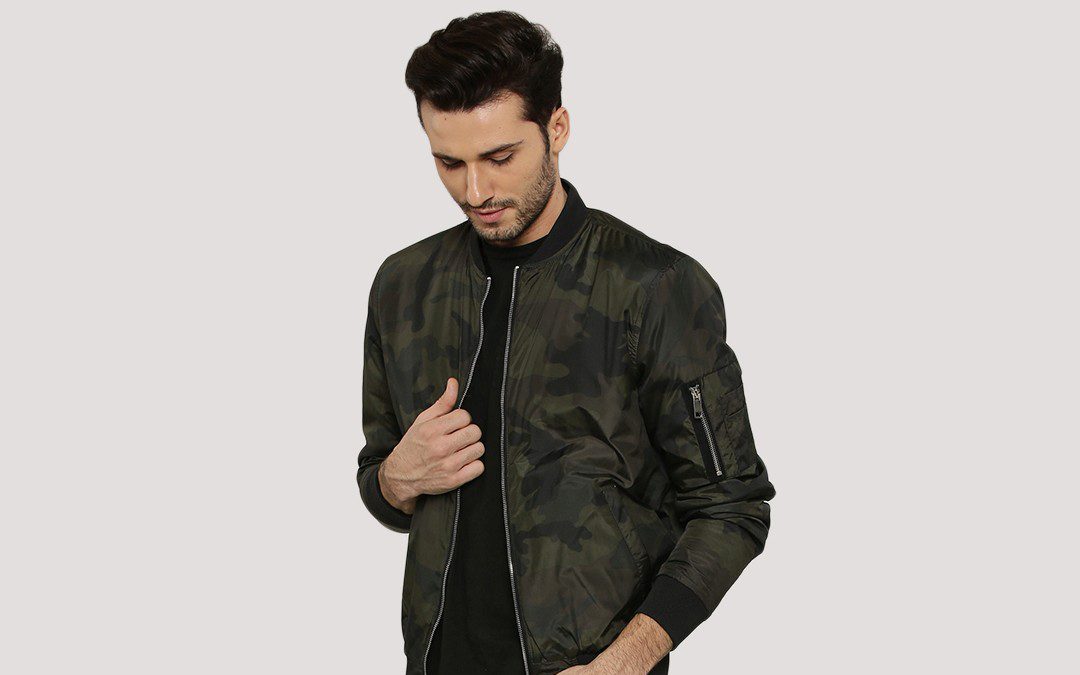 Camouflage print Jacket, Dark
Wash Denim Jeans, Black Sneakers or Dress Shoes. Try this look with Dana Point
Dots Sock
Do: A military-style jacket
works for any season. Chances are, you already own a shirt, a pair of pants,
and a pair of shoes that will complement your new favorite coat. But if you
don’t, we recommend you snatch up some go-to classics like dark-wash denim, a
fitted polo shirt or long-sleeve thermal, and slick tennis shoes: slip-on Vans
or Supergas. If you want to take a slight risk, sport a pair of polka dot socks
in a similar color scheme. By complementing camouflage print with dark solid
colors, this look becomes work-appropriate in casual offices.
Don’t: Classic doesn’t mean
boring or sloppy. If you’re going to go for a simple look, make sure the pieces
you are wearing are as crisp and clean as can be. Tapered khakis and leather
loafers with a camo jacket make for an interesting combination that’s still
polished. Distressed jeans, a ratty gym T-shirt, and a torn jacket — try again.
Camouflage Print Chinos 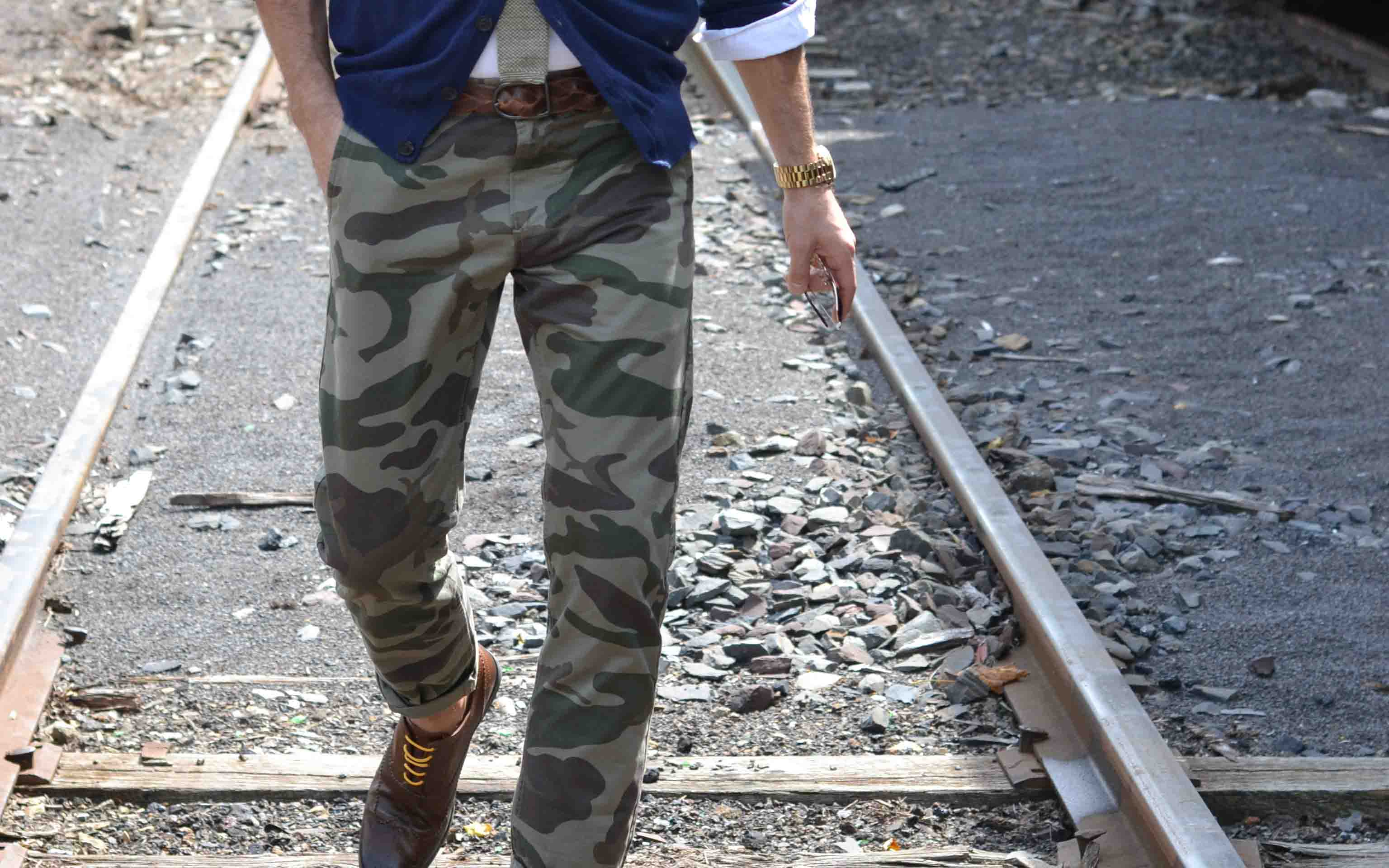 Camouflage Print Chinos,
Leather Dress Shoes, Bright Yellow Laces
Do: Camo can be intimidating
to print newbies. So, when preparing to style a bold piece like camouflage
pants, imagine that the bottoms are actually just olive green. It’s
significantly easier to match items with a neutral color like olive green than
it is a bold print. If you trick your brain into eliminating the intimidation
that accompanies camo, the print will immediately feel more wearable. While the
bottoms pair well with black, white, and navy, you might feel compelled to
branch out and add a pop of a trending bright color, like bright red or yellow.
Don’t: Beware of getting too
kitschy. This means, although your camouflage print makes you look as cool and
collected as a soldier, it’s important to remember you are not actually in the
military. By no means does the average man need to pair a camouflage print
jacket with combat boots and a beret. You’ll also want to limit the number of
trends you’re representing in a single outfit, especially in professional
context. Camo, an already trending item, doesn’t need to be paired with “dad
sneakers” and oversized fits.
Camouflage Print Ties 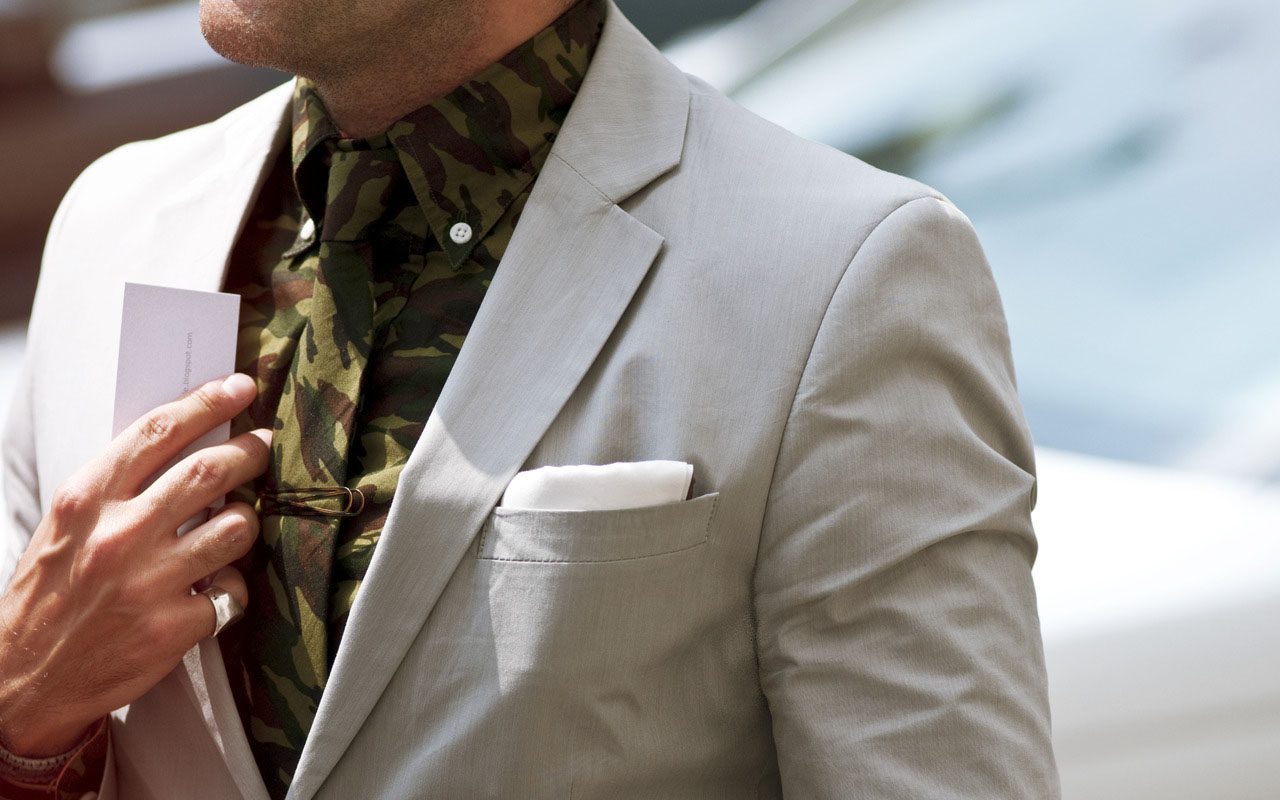 Camouflage Woodland Skinny Tie and Dark Blazer
or Sweater Vest
Do: A subtle splash of camo
can be a stylish way to differentiate yourself from the standard cycle of
business bland. To sneak camouflage print into your professional wardrobe, try
playing with different color variations of the print. For instance, a
camouflage skinny tie in blue tones pairs nicely with dark gray trousers, while
a camouflage dress shirt in red tones can add a work-appropriate edge to a
chocolate brown sports coat.
Don’t: It’s fun to bring some
unexpected camo in the workplace every now and then, but don’t be that guy that
shows up every day to work with a camo something. (Exception: If you work at
Bass Pro Shop or are a legit member of the military, please proceed.) Let
camouflage print be your introduction to the world of prints, and don’t forget
to add other classics like stripes and plaid in the mix every now and then.
The Many Lives of Camouflage
Print 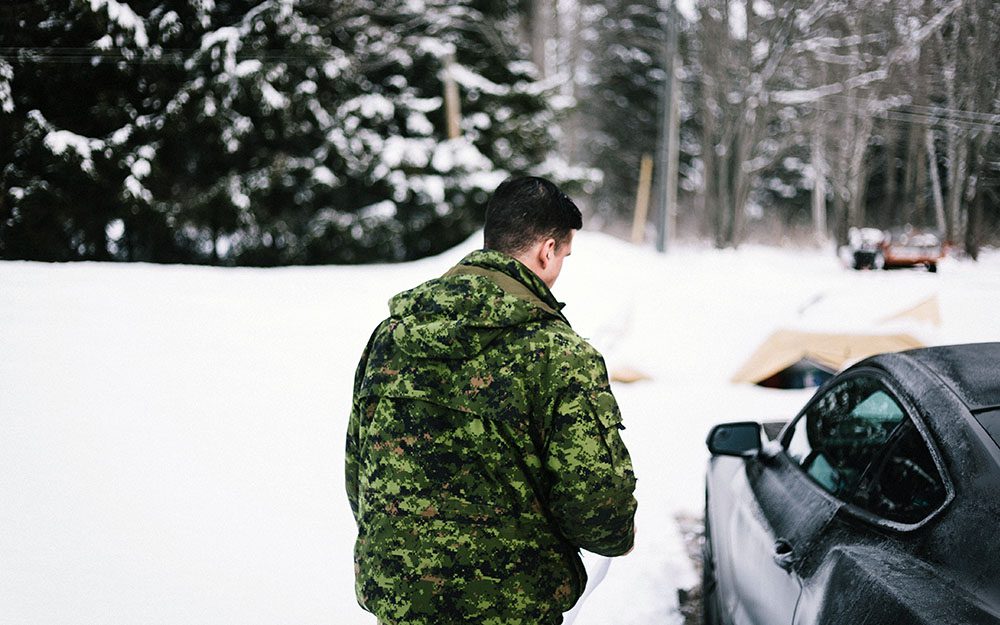 Thanks to Supreme, Balmain,
and APC, in recent years, camo has become synonymous with street culture. It
wasn’t always that way, though. Rooted in nationalism, camouflage print started
in the 1800s as a disruption to the conventional military look, for a very
functional reason. Soldiers once wore bright colors in battle (think: British
red coats) so that they’d be visible amidst all the cannon smoke. However, when
trench and aerial warfare became key strategies during World War I, it was
necessary for soldiers to remain unseen. Enter the camouflers — designers hired
by militaries to develop under-the-radar garb, worn today by fashion-forward
men and hunters alike.
By the war’s end, camouflage
print was incorporated into paintings, posters, accessories, and of course,
clothing. In the 1970s and ’80s, the familiar green, brown, and black woodland
pattern became a statement for pop culture’s biggest names, including Andy
Warhol, who released a series of multi-color camouflage prints in ’87 before he
passed.
Similar to the newfound love
for fanny packs, floral shirts, and tiny sunglasses, camouflage print may feel
like an odd trend because of the memories associated with it. For the modern
man now in his late 20s and early 30s, camo is a reminder of WWE superstars,
NSYNC style mishaps, and your G.I. Joe action figures. Yet despite how
counterintuitive it can seem to reinvent something that seemed like a
fashion-don’t as a kid, this versatile print has made an undeniably impressive
comeback, and it will work wonders in your daily wardrobe.

Camo has never really gone out
of style. It’s clear that the print can work, even at work. Demonstrate your
ability to disrupt an industry with a bit of stylish risk-taking. Blending into
the crowd isn’t an option when you’re a camo connoisseur.
What would you wear to stand
out to a client or employer? Let us know below
Emma
Klug
SOURCE:
THE GENTLEMANUAL