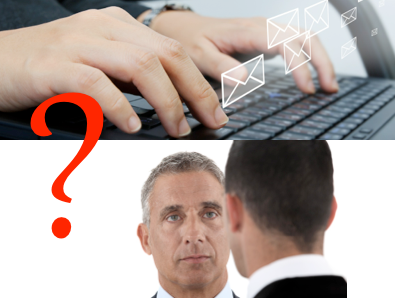 Our intuitive understanding is that face-to-face communication is the most persuasive, but it isn’t always true.
In reality, of course, it’s not always possible to meet in person, so email wins out. How, then, do people react to persuasion attempts over email?
Persuasion research has uncovered fascinating effects: that men seem more responsive to email because it bypasses their competitive tendencies (Guadagno & Cialdini, 2002). Women, however, may respond better in face-to-face encounters because they are more ‘relationship-minded’. But is this finding just a gender stereotype?

Guadagno and Cialdini explain their results in terms of expectations about social roles. Cultural stereotypes have it that men are task-oriented whereas women are relationship-oriented. So, when put in a situation where relationships were important i.e. face-to-face, women tend to follow the cultural stereotype. Similarly, as men are often viewed as more competitive, when they face each other they tend to be more competitive and so less open to persuasion.

Practically, what this research is suggesting is that email could provide a way of side-stepping men’s competitive tendencies. But, this research doesn’t consider the effects of pre-existing relationships. After all, we react differently to friends than strangers.


Oneness refers to the idea of an interconnected identity. The closer two people feel, the more helping the other person is like helping themselves. So oneness can promote altruistic behaviour. Oneness can also be seen in terms of the classic in-group out-group dichotomy in social psychology. People show a positive bias towards other people who are in the same notional group as themselves: e.g. work colleagues.

Oneness was very simply manipulated in Guadagno and Cialdini’s study by encouraging strangers to view each other in one of two ways. In the first manipulation two strangers were shown fictional results of a questionnaire they had completed which showed they had identical personalities. In the second, the fictional results showed they had completely different personalities. In this way, the first groups ‘oneness’ was encouraged, while in the second it was discouraged.

Then, as had been done in the previous study, participants attempted to persuade each other.
Results


The researchers found that when there were low levels of oneness between men, email was a more effective way to communicate. Conversely, for women, higher levels of oneness made face-to-face encounters significantly more persuasive.

How can these results be explained? Women may not generally be easily persuaded over email because there is less opportunity to form relationships from which attitude changes can be built. Men, however, tend to be less competitive over email and are better able to concentrate on arguments presented, rather than being distracted by seeing the other man as a threat.


Bear in mind that this study is ironing out the spectrum of differences amongst both men and women. In other words, clearly not all women are always relationship-focussed and not all men are always task-focussed. It seems an obvious point but it’s a mistake often made in mainstream media presentation of psychology research.

Additionally, one of the drawbacks of the study was that it only concentrated on same-sex communication. Although, I would suggest it’s better not to think of this study in terms of men and women but in terms of individual relationships.

So, if you want to persuade someone with whom you have a competitive relationship – whatever your and their gender – email might be a better choice. On the other hand, if your persuasion attempt is aimed at someone with whom you have a more cooperative relationship, face-to-face could be a better choice. Unfortunately, it isn’t always possible to see someone face-to-face, so it’s very useful to be aware of the processes operating in both face-to-face and online interactions.