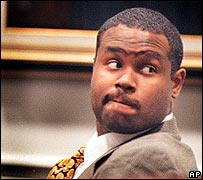 “The life of a convicted
murderer is hanging in the balance while a US jury considers whether his
intelligence has increased enough to allow him to be put to death.
…the intellectual stimulation
the killer got by constant contact with lawyers in the case is thought to have
raised his IQ above the threshold of 70, which puts him in line for the death
penalty in Virginia.”

Incredible that anyone’s life could rest on an outmoded measure like IQ.

About
the author
Psychologist, Jeremy Dean, PhD
is the founder and author of PsyBlog. He holds a doctorate in psychology from
University College London and two other advanced degrees in psychology.
He has been writing about
scientific research on PsyBlog since 2004. He is also the author of the book
“Making Habits, Breaking Habits” (Da Capo, 2003) and several ebooks.
SOURCE:
PYSBLOG