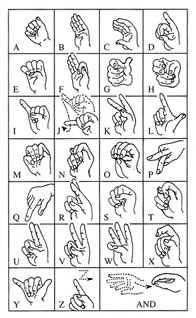 A minority of sign language theorists had thought the tip-of-the-fingers state might be unlikely because meaning in sign language (semantics) is much more closely associated with the form of the language (the ‘phonology’). For example it appears harder to forget the word for Switzerland in sign language because the sign for it in American Sign Language (and British Sign Language) traces out the white cross on the Swiss flag.


Most theorists don’t buy this argument, however, and in work published in Psychological Science by Thompson et al. (2005), researchers found good evidence that deaf signers do experience tip-of-the-fingers states just like speakers. In the research deaf signers were asked to put names to faces, cities and countries. Sure enough signers quite frequently reported knowing the name of the famous person, city or country, but being unable to completely remember the sign.

In fact signers could often remember most of the sign, but not all of it. Individual signs are composed of four different components: the shape of the hands, where the hands are, how they move, and how they are oriented. About half the time signers could remember three of these four components, but the final component eluded them – this was most frequently the movement of the hand(s). This is similar to the experience in spoken language of being able to remember part of a word, or its length, still without being able to retrieve the whole thing.


Theoretically this supports the idea that semantics (meaning) and phonology (the sign) are separate in sign language just as in spoken languages. But the similarities between sign language and spoken languages shouldn’t be taken too far. For example American Sign Language is not just a mimed version of English, it has its own syntax and grammar.


Indeed British Sign Language is very different to American Sign Language and, according to QI: The Pocket Book of General Ignorancea deaf American will find it easier chatting to native deaf signers in Paris than in Britain. For deaf signers, then, rather than Britain and America being two nations divided by a common language, they are two nations divided by two completely different languages.


He has been writing about scientific research on PsyBlog since 2004. He is also the author of the book “Making Habits, Breaking Habits” (Da Capo, 2003) and several ebooks