DEMOCRACY IN AFRICA: HEADLINES FROM
KENYA 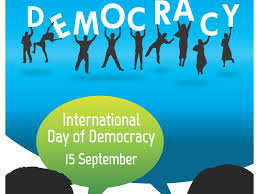 “The court has made its decision. We respect it.
We don’t agree with it. And again, I say peace, that is the nature of
democracy.” – Uhuru Kenyatta, President of
Kenya (1st September 2017)

International
Day of Democracy is celebrated annually on September 15th. In 2007,
the United Nations General Assembly resolved to observe 15th
September as the International Day of Democracy – with the purpose of promoting
and upholding the principles of democracy – and invited all member states and
organizations to commemorate the day in an appropriate manner that contributes
to raising public awareness. Democracy is a form of government in which all
eligible citizens participate equally – either directly or through elected
representatives – in the proposal, development, and creation of laws. It
encompasses social, economic and cultural conditions that enable the free and
equal practice of political self-determination. 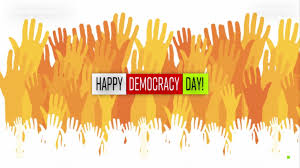 Democracy
contrasts with forms of government where power is either held by one person, as
in a monarchy, or where power is held by a small number of individuals, as in
an oligarchy. No consensus exists on how to define democracy, but equality,
freedom and rule of law have been identified as important characteristics since
ancient times. These principles are reflected in all eligible citizens being
equal before the law and having equal access to legislative processes. For
example, in a representative democracy, every vote has equal weight, and the
freedom of its eligible citizens is secured by legitimized rights.

Democracy
is a universal value based on the freely spoken and expressed will of people to
determine their own political, economic, social and cultural systems in all
aspects of their lives. Evolved over centuries, democracies share many common
features but cannot be reduced to a single model. In short, democracy pertains
the idea that everyone has the right to have their own beliefs, and to say and
write what they think. Every year on the 15th September, the United Nations
celebrate these ideas on the International Day of Democracy. 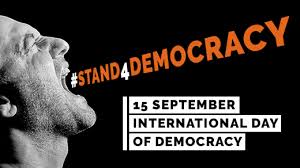 This
year’s theme – Democracy and Conflict
Prevention focuses on the critical need to strengthen democratic
institutions to promote peace and stability. A more integrated approach to
foster resilient societies calls for effective and inclusive democratic
governance with respect for Human Rights and the Rule of Law. Resilient
societies can mitigate disputes through mediation, dialogue and a reasonable
degree of legitimacy of their institutions. Developing effective conflict
prevention mechanisms and infrastructures provides a foundation to resolve
grievances and sustain peace. Processes, such as peace agreements, elections
and constitutional reforms, can help maintain equilibrium between competing
interests and reduce fragility and the likelihood of organized violence. Strong
leadership to support democracy, strengthen civil society, empower women and
uphold the Rule of Law are conditions that preserve stability and peace.

Around
the same time last year, I wrote an article on the same topic, titled; “DEMOCRACY IN AFRICA: HEADLINES FROM SOUTH
AFRICA” (https://shegzsablezs.blogspot.com.ng/2017/09/democracy-in-africa-headlines-from.html) where I noted that Democracy is gradually taking its
deserved position on the African continent. I also beamed the searchlight on
South Africa. Excerpts from the article; “Sometimes
in April, The South Africa’s highest court ruled unanimously that President
Jacob Zuma failed to “uphold, defend and respect the constitution” when he
ignored the order of an anti-corruption watchdog to repay some of the millions
spent to upgrade his sprawling rural residence at Nkandla in KwaZulu-Natal.
After delivering a stinging rebuke to the President, the Constitutional Court
gave the president 105 days to repay the “reasonable cost” of
non-security-related upgrades to his private home.” (Oluwole Olusanya,
2016)
Interestingly, on
1st of September which co-incidentally collided with the Sallah celebration,
Kenya was in the news for the right reason, It was the first time in Africa’s
history an election against a sitting President would be nullified. I was marveled when I watched the news on CNN, I have to state categorically that I
do not have anything against the incumbent President and I cannot comment on
the allegation of irregularities on the election result manipulation, I am only
celebrating the fact that Africa’s Judiciary is gradually waking up to its
responsibility of being the last hope of the defenseless and downtrodden in a
fully-functionally democratic dispensation. 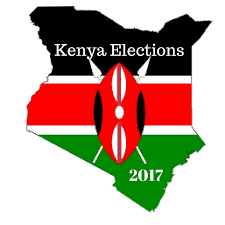 Kenya’s
Supreme Court on Friday, 1st September 2017 nullified President
Uhuru Kenyatta’s election win citing irregularities and ordered a new poll
within 60 days, a rare move in Africa where judicial power is often seen as an
extension of government. The ruling, broadcast to a stunned nation on national
television, sets up a new race for the presidency between Kenyatta, 55, and veteran
opponent Raila Odinga, 72. Kenyatta called for calm and respect for the ruling,
while Odinga’s cheering supporters paraded in the streets of his western Kenyan
heartland. Last month’s election results sparked protests and sporadic violence
that killed at least 28 people. 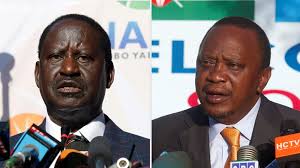 Judge
David Maraga announced the Supreme Court’s verdict that was backed by four of
the six judges, saying the declaration of Kenyatta’s victory was “invalid, null and void”. The judge said
the election board “failed, neglected or
refused to conduct the presidential election in a manner consistent with the
dictates of the constitution.” Kenya’s judiciary went through sweeping
changes after 2007 election violence, on a continent where many Africans
complain of judiciaries that rubber stamp government or presidential decisions.
“The court has made its decision. We
respect it. We don’t agree with it. And again, I say peace, “Kenyatta told
the nation in a televised address. “That
is the nature of democracy.” Official
results had given Kenyatta 54.3 percent of the vote, compared to Odinga’s 44.7
percent, a lead of 1.4 million votes. Kenyatta’s ruling party also swept the
legislature. “For the first time in
history of African democratization a ruling has been made by a court nullifying
irregular elections for the president,” Odinga said, adding that members of
the election board “belong in jail”
for their conduct. (Source: Reuters)
Deductively,
it is quite apparent that times are changing rapidly with Africans getting more
and more involved in the democratic processes of their respective nation states
but there is still room for improvement. We need to continue to hold our
leaders accountable because we are somehow affected by their actions and
in actions and it goes a long way in shaping our future. Democracy promotes good
governance which ensures that the people’s opinion, aspirations and will are
given adequate attention and utmost consideration. On this note, I congratulate
and welcome my fellow Africans to a new dawn where the rule of law and social
justice would rule through a just and fair democratic dispensation and would
illuminate the will of the African people. (DEMOCRACY IN AFRICA: HEADLINES FROM
SOUTH AFRICA) (Oluwole Olusanya, 2016)
God
Bless Us All
Olusanya,
Oluwole Sheriff