One Thing You Probably Might Not Know About MonkeyPox 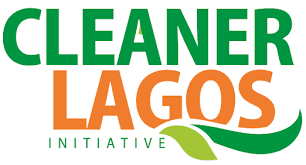 ‘Residents and motorists, yesterday, raised
alarm over increasing heaps of refuse in Lagos, especially along major roads
and streets, lamenting that besides the health risk, it is compounding the
gridlock in the state. They decried the stench oozing from the refuse dumped on
major roads and streets in the state. Residents and motorists told Vanguard
that among major roads and streets in the state were currently filled with
refuse waiting to be cleared were Lagos-Badagry Expressway specifically
Okokomaiko end of the road, Ojuelegba, LASU-Isheri road, Oshodi Apapa
Expressway, Mushin, Isolo road, Akanro, Ilasamaja, Mushin Agege Moto Road,
Ishaga, Lawanson and others. A resident, Miss. Georgina Ezekiel, while
expressing disgust, said: “It is no more Lagos. It is now Ijora-Badia state.
Lagos has never been this dirty. I passed through Ojuelegba road yesterday and
you needed to see the huge refuse dump along the road.” According to Rose
Daniel, “while going out yesterday, I passed through Igando and you needed to have
seen the high level of dumps at the bus stop, almost all the bus stop had same
logo. And that was when I concluded that the state is dirty and it really
pained me for what Lagos is becoming in recent times.” A commercial driver,
Olayiwola Rasak, while lamenting the refuse that littered the Lagos-Badagry
Expressway, said: “You need to see refuse at the Okokomaiko end of
Lagos-Badagry Expressway. It has taken over one lane of the road. We spend more
hours than expected.” (Source: Vanguard News – January 17, 2018)
(https://www.vanguardngr.com/2018/01/residents-motorists-lament-refuse-take-lagos/) 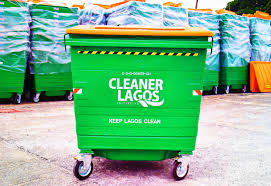 Sometimes last
month, I was in Mr. Femi’s car and we were trying to connect Iyana Ipaja from
Ikeja GRA, we were trying to navigate Ikeja-Along axis but the ongoing road construction
caused a traffic snarl. We could not stop praising the good works of the
current administration chaired by Governor Akinwunmi Ambode when the both of us
concluded that he deserves a second term in office. “Honestly, I was sceptical at first, I only voted for him because
of the party” I said in regret, noting that Ambode only got my vote in
the 2015 Gubernatorial polls because he was the APC flag bearer for Lagos
state. “However, he has proved me
wrong in all ramifications and I am sure he will get my vote again in 2019”
I concluded. 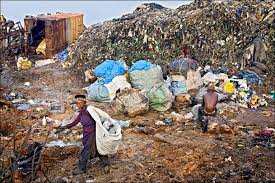 Mr. Femi also
thinks in a similar way; “He has
overhaul Lagos in every aspect, but he has failed in the aspect of waste collection
and management. Lagos is an eyesore especially during the yuletide season”
He noted.
In the same vein,
one of my readers – Adebayo Balogun advised me to write an article about the appalling
rate at which Lagos is fast becoming a giant dumping site. We stopped at a bus
stop along Egbeda-Idimu on a fateful day when he showed the huge collection of
refuse that adorned the Bus Stop. Similarly, I knew I had to write something
about the deplorable situation of refuse in the state when Funbi posted the
picture below in her status on Whats-app last week. 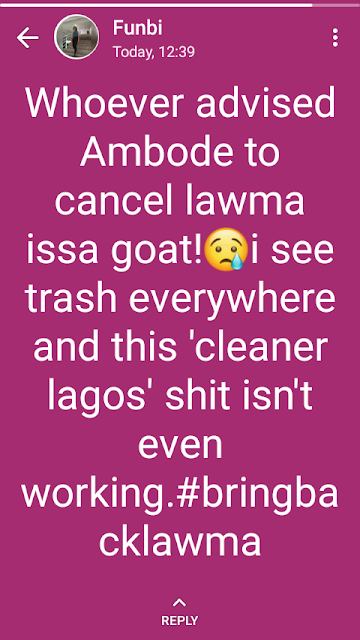 “It is time for me to do something.”
I thought out loud as I concluded that I had to put a prodigious piece
together.
Consequently, this
informed decision prompted extensive research; I wanted to understand what the
Lagos State government is currently doing to combat the scourge. I wanted to
know the reason behind the change from Lagos State Waste Management Authority
(LAWMA) to Cleaner Lagos Initiative (CLI). I visited the official website of
the Cleaner Lagos Initiative and I also read a number of articles online about
the subject matter.
Interestingly, I
stumbled on an article that seemed to provide all the necessary information and
understanding needed to convince us that the Ambode’s administration is
listening to our cries and he is working for the betterment of every lagosian.
The article is titled; “Understanding
the need for Cleaner Lagos Initiative” authored by Tunde Opeseitan,
January 17, 2018.
Excerpts from the
article; “Before the administration
of Governor Akinwunmi Ambode decided to implement the new waste management
policy, a study was commissioned to comprehensively look into the issue of the
environment. The report showed that the Lagos State Waste Management Authority
(LAWMA) had about 150 rickety compactors and the Private Sector Participation (PSP)
operators had some compactors many of which were constantly breaking down on
the roads causing traffic gridlock and oozing out offensive stench to
residents. All the compactors then put together were bench-marked against the
volume of waste generated in the State and the report clearly showed that they
were grossly inadequate and effective to evacuate about 13,000 tonnes of waste
generated daily in the State“
In some parts of
the article, Tunde also told us about the plans by the current administration
to ensure that the major dumpsites in Lagos are closed down and clinically
treated to free up land space for construction of wonderful edifice in the
future. 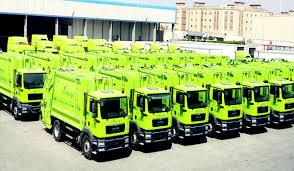 Hear him; “Under the new arrangement, the
existing dump sites, which apart from being an eyesore and constitute health
risk to the State, would be closed down and clinically treated to free up the
land space for other befitting and impactful projects. At the moment, work is
at advanced stage on the construction of Engineered Sanitary Landfill in the
outskirt of Epe, and the project, which is the first in West Africa, will birth
a revolutionary waste management in the State in line with global best
practices. There are concessions for additional two of such landfills to be
built in the State under the Build, Operate and Transfer (BOT) arrangement.
Credits
must also be given to the previous administrations in the State for coming up
with the idea of Transfer Loading Stations (TLS)/Material Recovery facilities,
but like the mantra of the present administration which is continuity with
improvement, the existing of such stations in Agege, Simpson, Oshodi and Mushin
are being retrofitted and upgraded to meet up with current realities, while
work has already been completed at Tapa Transfer Loading Station and Ogudu
Waste Depot by the environmental utility group contracted by the State
Government to implement the CLI, Visionscape Sanitation Solutions.”
(To read the full
length of the article, please click here)
Conclusively, I am optimistic
that the heaps of refuse we constantly see in our Bus Stops would soon be a
thing of the past if all the information contained in Tunde’s write-up provides
the true picture of the Ambode’s administration’s plan for waste collection and
management in the “Centre of
Excellence.” I also like to implore my reader to give the state
government all the support its needs as its advances on its mandate to make
Lagos is mega city. 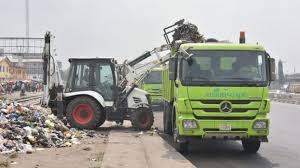 Truth be told, I
saw the officials of CLI in their Orange and Green uniforms picking up dirt in
Allen Avenue on Friday and the same thing happen yesterday in my neighborhood.
If you ask for my opinion, I would say we finally have a “people’s governor“
God Bless Us All
Olusanya, Oluwole Sheriff