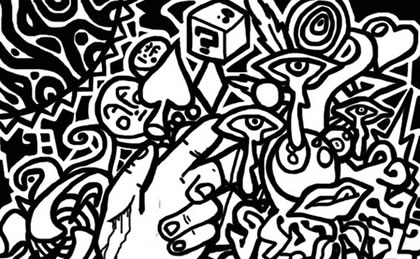 William of Occam has a lot to
answer for. Let me explain. Psychology bloggers are getting excited over recent
research in biological psychiatry that integrates the environment into
aetiological models of mental illness. While these developments are to be
welcomed, they do come relatively late in the day, bearing in mind we’ve
already got evidence for myriad environmental causes including urbanicity,
child abuse, social class and so on.
Occam, of course, was the
minimalist monk who thought the simplest explanation for a phenomenon was
generally the best explanation*. Researchers looking for the genetic causes of
such psychopathologies as schizophrenia or bipolar disorder have, or so it
appears, followed Occam’s handy rule, tending not to include the environment as
a possible causal variable.
That’s not to be critical of
their approach which is perfectly logical. It makes sense to look for a genetic
cause first if you think of schizophrenia, for example, within a medical model.
For many psychologists, however, the environment is often the first port of
call in the search for the etiology of mental illness.
Researchers working within a
medical model have not had an enormous amount of success with a purely genetic
approach. It’s been very hard to show a direct link between genes and a
psychological disorder. And so now the emphasis is turning to an interaction
between genes and the environment (Gene-environment interactions in psychiatry:
joining forces with neuroscience, via Mind Hacks). Bearing in mind how long
many researchers have been banging on about the importance of the environment,
it is hardly a surprising move.
What is even less surprising
is the familiar way in which sets of researchers happily sit in their
respective ghettos largely refusing to acknowledge each other. Another reason
why this particular forward-looking piece of research is to be welcomed.
To return to Occam, I don’t
blame him for the idea that we should choose the simplest explanation for a
phenomenon, but more that his philosophy has become so ingrained in those
studying brain, mind, behaviour, what-ever-you-want-to-call-it. Surely the one
thing we can count on is that human thought and behaviour is formed by a
complex web of factors?
This is not to say that people
shouldn’t investigate single factors, of course they should. But, when building
a theoretical model of mental illness as complex as schizophrenia it is taking
Occam too literally to only include one aetiological factor.
[Hubris alert!] What
psychology needs instead of ‘Occam’s Razor’ is ‘Dean’s Diffuser’ coming from
the 21st Century philosopher and psychologist who wrote PsyBlog. This law
states that if you think any psychological phenomenon can be explained by a
single factor then, seriously, think again: the causes of human thought and
behaviour are actually incredibly diffuse.
About
the author
Psychologist, Jeremy Dean, PhD
is the founder and author of PsyBlog. He holds a doctorate in psychology from
University College London and two other advanced degrees in psychology.
He has been writing about
scientific research on PsyBlog since 2004. He is also the author of the book
“Making Habits, Breaking Habits” (Da Capo, 2003) and several ebooks.
* Technically what Occam said
was that if you have two theories which both explain the data adequately, then
you should choose the simpler one as it was less likely to needlessly introduce
errors. The key words in this context are: ‘which explain the data adequately’.
SOURCE:
PSYBLOG