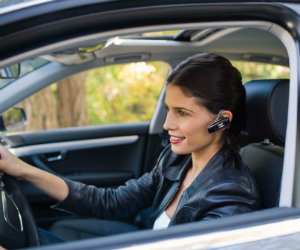 A team of psychologists at the
University of Illinois have been investigating how driving is affected by
simultaneous mobile phone use.
Previous research has found
the use of hands-free mobiles has a significant detrimental effect on driving.
Researchers assumed that speaking is a more complex cognitive function and so
the detrimental effect would be greater than listening. But this new research
has found that listening causes an equally strong effect.
The psychological research has
been backed up by investigations of those involved in road traffic accidents.
Recent findings published in the British Medical Journal showed that using a
mobile phone up to 10 minutes before a crash was associated with a fourfold increase
in likelihood of crashing. This fourfold increase was the same whether the
drivers were using a hands-free hand-held mobile.
Banning just hand-held mobile
phone use while driving has probably been largely a waste of time – unless it
is a stepping stone to a complete ban.
About
the author
Psychologist, Jeremy Dean, PhD
is the founder and author of PsyBlog. He holds a doctorate in psychology from
University College London and two other advanced degrees in psychology.
He has been writing about
scientific research on PsyBlog since 2004. He is also the author of the book
“Making Habits, Breaking Habits” (Da Capo, 2003) and several ebooks.
SOURCE:
PYSBLOG