Truly, what doesn’t kill you will only but make you stronger.
Many really don’t understand this saying. In life, you’ll face challenges that you just don’t seem to understand, but your attitude and actions will determine the outcome.
You all know I love to get inspiration from sports that I feel would motivate you and I. 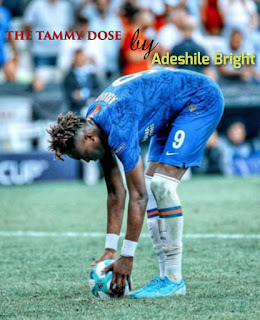 You see that picture above? That is Tammy Abraham, the Nigerian born Chelsea Striker. That particular shot was taken when he was about to take his penalty kick at the beginning of the season, Super cup, against the UEFA League champions, Liverpool.
Guess what, that kick of his cost Chelsea a loss, yes! He did missed that penalty! After the match, he was singled out by the spectators, he was boed, he was racially abused, BLACK! He was abruptly criticised. He faced hell when he lost that penalty kick. I’m sure he must have felt like going back to Aston Villa where he spent most of his time on loan. But! He never backed down, he never gave in, he never accepted the defeat and hatred for his unforgivable miss. He said to himself, no I’m never going to give up.
And he was quite quick to respond to the world that he still believes in himself!
And guess what?
The rejected stone yesterday is today’s corner stone of the house. He has netted in every games he has played now for Chelsea.
In fact, He scored his first Har trick for the blues on Saturday, putting him on the history lane as he becomes the youngest English Premier player to score an hat-trick!
Zero to Hero, you’ll say.
This was the same person that was demystified, castigated, reprimanded, rebuked, chastised, chided, reproved , reproached, scolded, remonstrated, berated, lambasted, hauled over the coals, smoked off by the world some weeks ago. Now he’s turned to a celebrated striker today!
“We love you Tammy”, fans chanted!
Who says you won’t be boed?
Who says you won’t be castigated?
Who says you won’t be burnt brown?
Who says you won’t be drown’d?
Who says you be disappointed?
Who says you won’t be betrayed?
Who says you won’t be critised?
Who says you won’t be hurt?
Who says you won’t tossed?
You will be broken, you’ll be shaken!
But, the outcome of all these depends on you!
Yes you!
Let people kill your flesh, but never let them kill your spirit. Your spirit for greatness, your spirit to bring your dreams to reality.
The same clock that caused disturbance and reluctance at 8:00am, resumption time at work, is still the same clock that clicked at 5:00pm (your closing/happy hour).
If you must fall to the floor, before you get back up, make sure you add a spring to your foot. Don’t just get up, spring up!
Have a wonderful Thursday.
#brightwords #lifeisnotmagic #brightcares