How to remove dead skin from the face 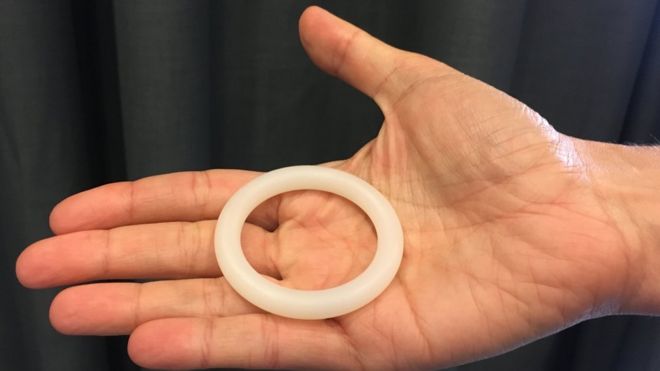 Adapted Media Release
A vaginal ring that
researchers are hopeful will be approved as a method for preventing HIV in
women was found to be safe and acceptable in teen girls, according to results
of a study conducted in the United States and reported at the 9th IAS
Conference on HIV Science (IAS 2017) in Paris. The study is the first to
evaluate the ring, which contains an antiretroviral (ARV) drug called dapivirine
and is used for a month at a time, in girls under age 18.
The dapivirine ring has
already been shown to be both safe and to help protect against HIV among women
ages 18-45 in two Phase III trials – ASPIRE , which was conducted by the
National Institutes of Health (NIH)-funded Microbicide Trials Network (MTN),
and The Ring Study, led by the International Partnership for Microbicides
(IPM), a non-profit organization that also developed the dapivirine ring.
Together, the two trials enrolled more than 4,500 women from four African
countries. IPM is seeking regulatory approval of the ring for adult women of
the same age.
If approved, the dapivirine
ring would be the first biomedical prevention product exclusively for women.
The new study, known as MTN-023/IPM 030, was designed to provide the kind of
information about safety and tolerability that regulatory authorities would
need to expand approval of the ring to also include girls under age 18.
MTN-023/IPM 030 was conducted
by the MTN in collaboration with the Adolescent Medicine Trials Network for
HIV/AIDS Interventions (ATN), which is also funded by the NIH. MTN is planning
to launch a second trial later this year, called REACH, that will collect
safety data among adolescent girls and young women in Africa, who are among the
most vulnerable population at risk of acquiring HIV.
“If the ring is approved
for women older than age 18, it’s imperative that we have the data in hand to
show that the ring is safe to use in younger women as well,” explained
Sharon Hillier, Ph.D., principal investigator of the MTN, and professor and
vice chair of the department of obstetrics, gynecology and reproductive
sciences at the University of Pittsburgh School of Medicine. “HIV doesn’t
distinguish between a 16-year-old and an 18-year-old. Access to safe and
effective HIV prevention shouldn’t either. Young women of all ages deserve to
be protected.”
MTN-023/IPM 030 enrolled 96
girls ages 15-17 at six U.S. sites: two affiliated with the MTN (University of
Pittsburgh and the University of Alabama at Birmingham) and four affiliated
with the ATN (St. Jude Children’s Research Hospital in Memphis; The Fenway
Institute in Boston; Children’s Hospital at Montefiore Medical Center, Bronx,
N.Y.; and University of Colorado Denver School of Medicine). The study was
conducted between July 2014 and July 2016, as ASPIRE and The Ring Study were
underway.
Participants were randomly
assigned to use either the dapivirine ring or a placebo ring that looked and
felt the same but contained no active drug; 73 participants were in the
dapivirine ring group and 23 were assigned to use the placebo ring.
Participants were asked to use their assigned ring for a month at a time for a
total of six months.
The study found no differences
in safety outcomes between the dapivirine ring and the placebo ring, reported
Katherine Bunge, M.D., at IAS 2017. Dr. Bunge, an assistant professor of
obstetrics and gynecology at the University of Pittsburgh School of Medicine,
was MTN-023/IPM 030 protocol co-chair. The study’s protocol chair was Kathleen
E. Squires, M.D., W Paul and Ida H Havens Professor of Infectious Diseases and
director, Division of Infectious Diseases, Thomas Jefferson University in
Philadelphia.
Adherence to ring use was also
high. By self-report, 42 percent of participants said they had never removed
the ring except to replace it monthly. In the dapivirine group, 87 percent of
plasma samples had detectable levels of drug suggestive of the ring being used
the previous day; 95 percent of the rings returned after use had drug levels
that suggested consistent use during the previous month. Questions asked of
participants three months into the study and after six months indicated the
ring was highly acceptable, with 95 percent saying the ring was easy to use and
74 percent indicating they were not aware of the ring during daily activities.
Some were worried that their partner would feel the ring during sex, but
overall, the majority of participants (93 percent) said they liked the ring.
In the REACH study, investigators
will collect information on the safety of both the monthly ring and Truvada as
daily PrEP, and explore whether biological or physiological factors affect
product efficacy or HIV susceptibility in adolescent girls and young women. In
addition, REACH, also known as MTN-034/IPM 045, will evaluate how adolescent
girls and young women use the ring and PrEP and their preferences for either or
both approaches. Approximately 300 girls and young women ages 16-21 will be
enrolled at five MTN-affiliated sites in Kenya, South Africa, Uganda and
Zimbabwe. Pending ethics committee and in-country approvals, the study is
expected to start late 2017.
Results of ASPIRE and The Ring
Study, which were reported in February 2016, found the ring reduced women’s
risk of acquiring HIV by about 30 percent overall (by 27 percent in ASPIRE and
by 31 percent in The Ring Study). Higher levels of protection were seen in
women 21 and older, who used the ring more regularly. Results of an exploratory
analysis of ASPIRE data reported at AIDS 2016 found the level of HIV protection
was at least 56 percent with consistent use and as high as 75 percent or more
with near perfect use.
Adolescent girls and young
women (ages 15-24) accounted for 20 percent of new HIV infections among adults
globally in 2015, yet represent just 11 percent of the adult population. In
sub-Saharan Africa, adolescent girls and young women accounted for 25 percent,
or one out of every four, new infections, with nearly 1,000 being infected
every day.
MTN-023/IPM 030 was funded by
jointly by the National Institute of Allergy and Infectious Diseases, Eunice
Kennedy Shriver National Institute of Child Health and Human Development and
the National Institute of Mental Health, all part of the NIH.
SOURCE:
MEDICAL NEWS TODAY