I started swimming classes a couple of weeks ago. I had always loved the feel of water; the sound of splashes and the coolness that accompanies it. Classes started quite well, each class seeing me gain more confidence in the water.

My swim coaches were an amazing bunch of humans. They took their time to explain meticulously the nitty-gritty of swimming and provided words of encouragement from time to time. Coach Dami would particularly churn out examples of how she started out swimming as a beginner.

“You think you have a phobia for water. Yours is nothing close to mine. I used to imagine that there was another world beneath the pool that would close in on me. All the scary movies I had seen in life suddenly came to life every time I dipped my head in the pool. I would lift my head out of the water panting heavily.”

Coach Beauty would always say “All that fear is all in your head. This pool has four walls. It’s not an ocean that can sweep you away.”

The sad thing about motivation is that it is short-lived and requires constant replays. In one of my classes, I panicked at the deep end of the pool and fell deep, unable to bring my head up for air.

Instinctively, I began to fight the water to find my balance. I should have known it was a futile effort. My breath began to fail me as I could not lift my head to take in air. For some reason, no one was aware of what had happened. My swim coaches were at the opposite end of the pool focused on other members of the class who still struggled to take their first unsupported float.

It was not the first time I had swam to the deep end of the pool. Matter of fact, I was the first member of the class to pull that feat. What then happened? My greatest fear manifested. I was scared to death of the deep end. The reason why I had succeeded previously was that I was conscious of the presence of my swim coaches. This time around where none was closeby, the feeling of loneliness gripped me, destroying every confidence I had gathered in the first two lessons.

Amid my struggle with the water, a thought came to my mind. It came like a whisper “try to stay calm and think of what you can do. You must not drown”

As at the time I sank I was unable to see anything. The world around me was a blank mass. But just when I kept still my vision returned. I could see a hand stretched in front of me. I extended my hand and got the needed pull out of the water. When you are drowning in the troubles of life, try to be still. It might appear foolish but it ultimately is the best decision.

It gets interesting here. When I was out of the pool and done catching my breath, my swim coach told me the unthinkable “I will throw you back into the deep end of the pool!” She ended her statement with a nod. Throw who? I thought her crazy. I escaped drowning by whiskers and here stood my swim coach uttering the most unthinkable thing on the planet. It’s like telling a man who narrowly escaped from a lion’s den that you would take him right back to have one more encounter with the lions.

“if you don’t go back there, the fear will stay with you for life. You must fight it to overcome it. It’s nothing hard. Just allow your feet to touch the floor of the pool and spring up in a bounce. The water will support you.”

“But what if it doesn’t?” I wasn’t done asking my question when she threw me right in the middle of the deep end. As the water covered my head one more time, I noticed I was at peace. It felt like a familiar terrain I had navigated and so I did not panic. I scanned the water for the closest wall and bounced towards it just as she had instructed.

Trust that you can overcome your fears. And even when you feel incapable, plunge yourself in for an encounter. The backbreaking encounters that once stared at you in the past will stir you to lift your head in victory. 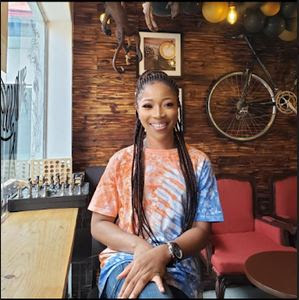 Miracle Okpala is a graduate of English Language and Literature from the University of Lagos, Akoka, Yaba, Lagos. She contributed to an anthology of short stories by the Department of English, UNILAG titled “International Sisi Eko and other stories” Her hobbies are singing, acting, and reading fiction.

Miracle presently works as a Tax Analyst at KPMG, she also anchors Mira’s Space, a column on SHEFFA where she shares her poems, short stories and timeless pieces of art. Please follow the link to read her column on Medium

Miracle Okpala
View More Posts
Miracle Okpala is a graduate of English Language and Literature from the University of Lagos, Akoka, Yaba, Lagos. She contributed to an anthology of short stories by the Department of English, UNILAG titled "International Sisi Eko and other stories" Her hobbies are singing, acting, and reading fiction. Miracle presently works as a Tax Analyst at KPMG, she also anchors Mira’s Space, a column on SHEFFA where she shares her poems, short stories and timeless pieces of art. Please follow the link to read her column on Medium
Writer/Poet/Tax Analyst