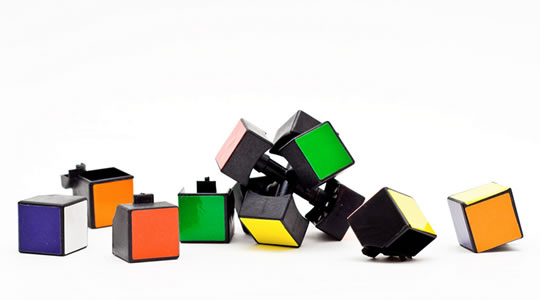 Sometimes the pieces of the puzzle are all there in front of you, but you just can’t put them together.


What psychologists call ‘functional fixedness’ is a common creativity-blocker. It’s when thinking about an object or idea gets stuck in a rut. It’s like the old saying that when you’ve got a hammer in your hand, everything looks like a nail.


It comes up all the time: at home, work, family, wherever. We all get stuck thinking in habitual ways about objects, ideas or even people at some time. To arrive at new solutions, we have to escape from these stale, established ways of thinking.


Here’s a little test you can try out to see if you can escape from functional fixedness:

“…consider the two-rings problem, in which the participant has to fasten together two weighty steel rings using only a long candle, a match, and a 2-in. cube of steel [and] melted wax is not strong enough to bond the rings.” (McCaffrey, 2012)


The key to the problem is remembering that a candle contains a wick and wicks aren’t just for burning, they are also pieces of string, which can be used for tying.


Once you get this flash of insight and escape from the fixed function of a candle (which is further reinforced by the presence of a match), the problem seems incredibly obvious. But until that moment you might as well be tackling Fermat’s Last Theorem.


That’s why Tom McCaffrey, a psychologist at UMass, has developed the ‘Generic-Parts-Technique’ to help us escape from functional fixedness. It simply involves asking two questions:

The thinking for a candle might go: first you break the candle down into its components, the wick and the string. Then you ask yourself what uses you can put a wick and a string to.


McCaffrey gave this and other similar puzzles to people to see if the technique works. Those in the control group only solved about 50% of these sorts of little puzzles. For those using the Generic-Parts-Technique, though, the success rate went up to 83%.


This works rather neatly for the type of puzzles tested in this study, but would it work in the real world? Well, it will depend on whether the answer to your problem already exists and is known to you, but in a different form.


There is evidence that this is often the case. A recent book, 1001 Inventions That Changed the World, looked at innovations both ancient and modern, and found that almost all involved co-opting existing items and ideas for new uses.


The Generic-Parts-Technique is useful because it’s a great way of tackling complex problems. The first rule encourages you to break the problem down into its component parts and this is almost always a sensible move. The mind can sometimes be much more creative with abstractions because you can start ignoring all the things you know about, say, a hammer, and start to see it in a new light.


The second rule, thinking about alternative uses, encourages a kind of practicality which is divorced from habitual uses. By going around this loop, through abstractions and alternative uses, you create sparks of ideas which may well help you through that mental road-block.

HOW I FIGHT INFLATION BY BUYING STOCKS ON INVEST BAMBOO