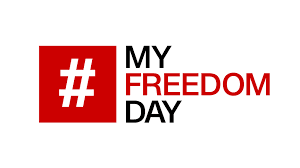 On the 14th
day of March, the Cable News Network also known as CNN observed #MyFreedomDay
to remind the world about the global challenge of human trafficking and modern
day slavery and why we should all get involved in the fight against human
trafficking, its various forms and its attendant implications.
Tony Maddox, EVP
and Managing Director of CNN International said, “The Freedom Project has gathered momentum every year since its
inception, making a clear and demonstrable impact on modern day slavery. Last
year’s inaugural #MyFreedomDay took it a step further, harnessing the
determination of young people around the world to put an end to slavery once
and for all. But as CNN’s reporting on slave auctions in Libya in recent months
showed, we still have much to do. This year’s #MyFreedomDay will help maintain
that momentum, and push this issue to the top of the agenda.”
Interestingly,
around this same time last year, I posted an article on my blog with a similar
topic. The article, titled; HUMAN
TRAFFICKING AND ITS CONSEQUENCES: MY WORLD, MY WAY brought the issue of
human trafficking and other types of cross-border human exploitation to
different perspectives. Excerpts from the article; “On Tuesday, 14th March, 2017, CNN observed the #MyFreedomDay
campaign which was a global outreach to remind the world about the threats
Modern Slavery presents to our collective existent on the planet – Earth. The
day was set aside to remind everyone of us about the dangers and damages caused
by Human Trafficking and forced labour the world over. According to Freedom
United (a global NGO that deals with trans-border human trafficking and
slavery), an estimated 45.8 million people are currently in slavery worldwide.
In every country around the world, people are exploited against their will,
controlled by threats, debt, and violence and so on. We may call it by many
names, but it amounts to the same thing: Modern Slavery. It is illegal
everywhere, but it continues to thrive because so many of us do not understand
it, do not want to think about it or/and do not know how to change it.”
To read the full length of the article, please click here.
Unfortunately, a
significant number of people believe that slavery ended in 1863, when in fact,
modern slavery exists in every corner of the globe. Not just in remote parts of
Southeast Asia, but in your hometown, in your backyard.  In America, there are 60,000 men, women and
children enslaved at this very moment. Globally, human trafficking is the
second largest and fastest-growing organized crime in the world. There are an
estimated 21 million people enslaved today, 4.5 million of which are in the sex
industry. Estimates for revenues in all forms of exploitation and slavery total
upwards of USD32 billion a year, and profits from sex slavery amount to nearly
USD10 billion. (Culled From: How to End Modern Slavery and Human Trafficking –
Somaly Mam)
Previously, we
addressed the definition of human trafficking, human trafficking and other
forms of Human rights violations, the United Nations efforts and achievements.
The call to action also served as a wake-up call to everyone of us to ensure
that we contribute our individual efforts to end all forms of modern-day
slavery in the previous article I wrote which was inspired by the first
#MyFreedomDay campaign of  CNN. This
write-up is an update version.
In consequence, we
will identify situations that provide a serene atmosphere for human trafficking
and other Human right violations to flourish. Prevention is bad than cure. 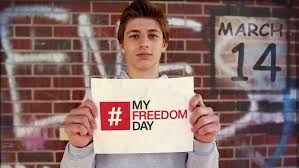 Risk
Factors for Human Trafficking
Trafficking and
modern day slavery has not remained a static phenomenon. On the contrary, at
times it seems as if it has picked up momentum, grown exponentially, especially
in areas of conflict, economic depression, and disasters, all which make
certain populations (poor, rural, women, etc.) more susceptible to trafficking.
They are itemized in subsequent paragraphs;
v  Trans-national criminal syndicates
such as the Yakuza in Japan and the Mexican cartels have become templates for business
for localized, regional street gangs. San Diego, California, at the border of
the United States and Mexico has witnessed the shift from gangs trafficking in
drugs to gangs trafficking primarily in sex.
v  Natural disasters
also represent a growing threat, leaving children exposed to trafficking, especially
the selling of babies through sham adoptions. This predicament came to light
after the 2010 earthquake in Haiti. Soon after the earthquake, hundreds of
children were taken out of the country, supposedly to be “adopted.” With such widespread devastation, the paperwork,
certificates, agreements, and contracts of adoption were difficult to substantiate.
There were also thousands of children who were left orphaned when their parents
were lost or killed. Seemingly out of nowhere, couples asserted that they were
in the middle of the adoption process and demanded their children. While this
might have been  true,  traffickers
used  the  circumstances
as  a  guise
to  get  large
groups  of  children
out of the country and sell them for sex and labour.
v  Conflicts and other forms of
unnatural disasters also leave communities at risk to
trafficking. Conflicts such as civil wars create situations of dire
impoverishment, displacement, loss of national identity, and disruption of
family systems. For example, the Syrian conflict since 2011 has resulted in
millions of Syrian refugees outside of the country and internally dislocated.
Three out of four Syrians lived in poverty by the end of 2013 along with the
added burdens of high inflation rates for basic market goods and
inaccessibility of services. The level of vulnerability to trafficking is extremely
high in these humanitarian situations where there is a lack of migration
policies or refugee resettlement services. Syrian  cases
of  trafficking  have
been  reported  in  labour  exploitation,
domestic  servitude,  conscription
in  armed  conflict,
forced  marriage  and
sexual  exploitation.
v  The political and social
situation is aggravated by cultural and religious mores,
which do not protect women and girls. Da’ish militants in Syria have also been
reported as kidnapping  boys  into
the  armed  conflict
as  child  soldiers
and  abducting  thousands
of  girls  for  forced
marriages and sexual slavery. This is only one example of conflict occurring in
a world where there are over 20 identified significant or critical conflicts. 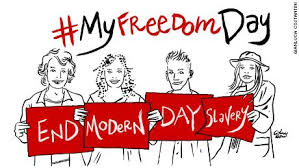 The
Call to Action 2.0
Conclusively, the
news about the release of the recently kidnapped Dapchi girls was received with
some much jubilation and fanfare. There were wide commendations of the present
administration on its efforts to make sure the kidnapped girls were released unconditionally.
However, we need to remind our leaders that prevention is also better and
easier than cure. Governments, NGOs, the International community and every one
of us need to wake up to humanity’s call and ensure that the fight against
human trafficking and other forms of modern day slavery is won.
#MyFreedomDay.
God Bless Us All
Olusanya, Oluwole
Sheriff