How To Rock “All Black Everything” 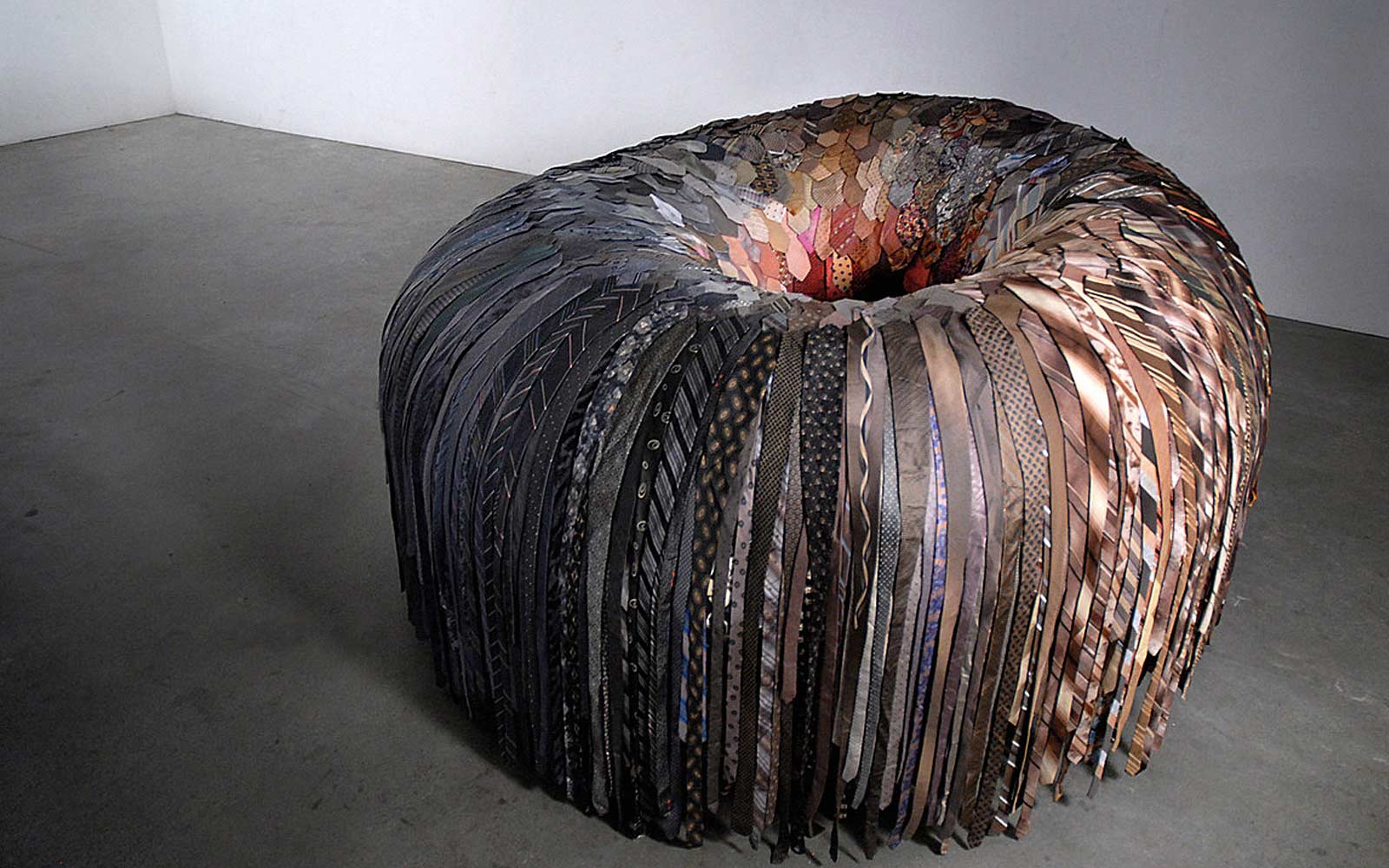 Written
by Beena Alvi
Isaac Amala and Liz Simpson
are the creative force behind the Isaac Amala & Liz Simpson Art Studio,
home to the most exciting and innovative use of ties we have seen and naturally
we had to get the skinny (tie) on what they’re all about. Their studio is based
in Berkeley, California. By profession, Isaac is a painter, writer and graphic
designer and Liz is a photographer, sculptor and garden designer specializing
in plants native to California. This brilliant partnership has working together
since 2007 and we had the immense pleasure of interviewing them about
themselves, their art work and what they’re working on next.
The GentleManual: How did you
two meet and what made you decide to work together?

Isaac Amala & Liz Simpson:
We’ve been friends for a long time, and have enjoyed watching each other’s
artwork evolve and change over the years. When the opportunity to work on a
large installation presented itself about seven years ago, collaborating and
pooling our creative resources felt like a natural thing to do. Through our
collaboration, we found that our respective skills dovetail almost perfectly,
and this has enabled us to produce the sorts of large, ambitious works that we
were interested in making. It’s been wonderful to see how our ideas and efforts
continually build toward something that neither of us would have necessarily
come up with on our own.

TGM: How did you two get into
this business of creating art using neckties? Why ties?

I & L: We were
commissioned to create a large sculptural installation that was to be suspended
over a cavernous event space. The piece had to be inexpensive to build, light
enough to hang, and large enough to command a presence in a huge room. It was a
predicament, for sure, but we saw it as an interesting design challenge. Since
both of us had worked with textiles in the past, identifying a material that we
could recycle and easily acquire in multiples made fabric feel like a logical
starting point.
Neckties were the answer.
Right away, we found that they were an absurdly rich material to work with and
full of contradictions. For one thing, they can be mass-produced but also
delicate and handmade, vintage or new, and run the gamut from Armani to
“Kmart-Special”. Some of them are gorgeous, while others are quite possibly
some of the dumbest things you’ve ever seen. They’re supposed to communicate
something about you, and you wear them over your heart, but at the same time
they can be this conservative piece of armor. Taken on its own, you can’t just
look at a necktie and immediately understand that it’s intended to wrap around
a human male’s neck. They’re quite abstract; when you get right down to it, a
necktie is just a strange, elongated hexagon.
They’re also mysterious.  They arrive in our studio with their own
secret histories and social baggage. Their design, brand labels, and
wear-and-tear tell completely different and sometimes conflicting stories.

TGM: Tell us a little bit
about your process with your creations. Where do you begin?

I & L: Because we’re
working with a specific material with qualities that are more-or-less
universally consistent, we always look to the necktie itself as our most basic
building block. We never alter them or take them apart. You could say that the
necktie is really the third collaborator in our practice: its proportions and
unique properties ultimately guide everything that we do.
Our sculptures and
installations all have, at their core, a fundamental formula. First, we
meticulously organize the neckties by color and pattern. Then we stack, wrap,
fold or sew them – and get a sense of the grander structure that we might be
able to build. That repeated action is always at the heart of each form that we
make – regardless of scale. We may use just a few handfuls of ties, or combine
thousands to create enormous structures.

TGM: What inspires you?

I & L: We are interested
in creating objects and environments that play with scale, texture, basic
shapes, colors, light and shadow. While the work is grounded in Minimalism, it
ventures into more organic territory, containing darker, more whimsical and
subversive layers. Many of the simple shapes that we use – like cones, or
cylinders, or donuts – can seem silly, sexual, or even menacing depending on
how you look at them. We’re interested in forms that take on a life of their
own, that demand your attention but don’t have a straightforward story to tell.

TGM:  Where do you get so many neckties?

I & L: We realized pretty
early on that we were going to need an incredible number of ties in order to
execute some of the grand schemes we had in mind. Initially, we turned to
relatives, friends, neighbors, and colleagues for donations. Gradually, as word
about our project spread, and our collection efforts took on a life of their
own, we were able to gather tens of thousands of recycled neckties from all
over.

TGM:  I’m sure you’ve received many positive
comments about your art work. What do you consider to be the best and/or most
accurate comment you have received?

I & L:  One of the most common reactions is, “Oh,
they’re ties!” It’s always gratifying to find that so many people don’t
initially realize that they’re looking at thousands of ties. We work really
hard to help the material behave in a new way and say something that it isn’t
used to saying, so we take our audience’s double-take as proof that we’ve done
something truly surprising and transformative.

TGM: How do you define success
for yourself as an artist?

I & L: Ultimately, we aim
to be challenged by and engaged in our work, and hopefully our audience will
feel the same way.

TGM: Have you thought about
expansion with other articles of clothing?

I & L: That’s a great
question. You know, there are a number of great artists out there that have
worked with clothing – an artist like Kaarina Kaikkonen (who works with dress
shirts) comes to mind. Our best answer is that our work isn’t really clothing-
or even fashion-specific. For the time being, the necktie happens to lie at the
intersection of a number of our interests.

TGM: Does the area in which
you live serve useful in terms of inspiration?

I & L: Isaac lives in San
Francisco and Liz lives in Oakland, but our studio space is in Berkeley. We’re
so fortunate to be surrounded by a diverse group of highly talented creators,
engineers, scientists, and entrepreneurs with whom we’re in constant dialog and
whom we find endlessly inspiring.

TGM: Are you currently working
on any new project(s)?

I & L: We are thrilled to
have a large walk-in installation in the San Jose Museum of Quilts &
Textiles’ upcoming exhibition, “Metamorphosis: Clothing and Identity”, curated
by Deborah Corsini, which runs from January 29 through April 27, 2014. It’s an
exciting show that highlights the work of the Bay Area’s historic and
experimental Art-to-Wear movement and continued innovative work by younger
generations of fiber art. Around the same time, Oakland’s Classic Cars West
Gallery and curator Dasha Matsuura invited us to create an enormous,
site-specific sculptural installation for their space. In short, we’re really
excited to be have these really ambitious pieces on view all over the Bay Area
in the beginning of 2014.

TGM:  Besides through your website, how else can
readers connect with you and where can your work be purchased?

I & L: First of all, you
can find us on Pinterest, Tumblr, Twitter and Instagram where you can track our
progress in the studio and see what inspires us on a daily basis. But the best
way to get in touch with us to purchase or commission work is through our
website.
Connect with Isaac and Liz!
Facebook | Twitter | Instagram | Pinterest | Tumblr | Site
Beena Alvi
SOURCE:
THE GENTLEMANUAL