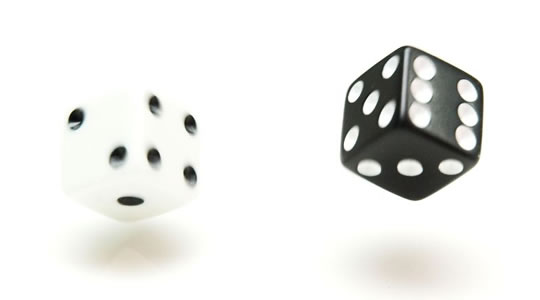 For this, the ninth nomination in the Top Ten Psychology Studies, it’s Nobel Prize-winning research. Daniel Kahneman and Amos Tversky were interested in the apparently strange way in which people make decisions in risky situations.

Before Kahneman and Tversky (1979) published their ground-breaking research, risky decisions were usually analysed by thinking about the total wealth involved. When you look at this bet in the context of the total wealth it makes sense to gamble. It’s obvious you’ve got more to gain than you have to lose. So, why do people tend not to?

It turns out that at low levels of risk, such as this coin flip situation, people are more averse to the loss of £10 than they are attracted by the chance of winning the £20. Studies have shown that people actually need the chance of winning £30 before they’ll consider risking their own £10.

Just as people show illogical risk aversion in some circumstances, they also show risk seeking behaviour in other circumstances.

This way of thinking about how people behave in risky situations, which Kahneman and Tversky called Prospect Theory, has a second major insight that follows on from the risk aversion and risk seeking described above.

Now most people (78%) choose B because the problem is presented in terms of losses. People suddenly prefer to take a risk. In fact, if you look at both the situations you’ll see that, mathematically, they’re identical and yet people’s decision is heavily influenced by the way the problem is framed. This effect has been termed preference reversal.

Now back to the real world

After considering these sorts of problems for a few minutes, it’s easy to wonder what all of this abstract reasoning has to do with the real world. Quite a lot argue Kahneman and Tversky. The Nobel Prize committee agreed.

So, next time you’re agonising over a decision in terms of losses, try this simple trick. Re-imagine the whole decision in terms of gains. I can’t promise it will help you make your decision, but at least you’ll better understand Kahneman and Tversky’s insightful research. Humans are not as rational as we would like to think.

He has been writing about scientific research on PsyBlog since 2004. He is also the author of the book “Making Habits, Breaking Habits” (Da Capo, 2003) and several ebooks: