There is a particular man I see every time I’m going home from school. I have always wondered how cool his life would have been if he had decided to do some certain things earlier in his life. Sometimes, I even wonder how he had actually lived his life up until the very first time I saw him. I was very sure he had lived it in a very funny way.
The funniest part would be that he might not even realize he could have lived a better life before it became too late for him. Anyways, people need to learn and that’s why I think we need to live life the way it is; more reason it’s referred to as life.
I was not much of his observer the first time I saw him. He was just begging for financial help from passengers in the bus yet to move, as normal beggars would. He said many prayers and solicited for money to eat. He was not a special kind of beggar; not the kind that had family issues or some sorts of other issues related to that. He was just one of the lazy beggars; I said to myself, never lazy to beg, but lazy to work or to have worked.
He looked quiet old too, with hairs fully colored grey as an indicator. Not so much people extended a hand of help though, but I was not bothered about that.
Thereafter, I met the same man doing the same thing not once or twice or even thrice. For real, I think it is now uncountable for me to see someone do the same thing every single time I see the person. I can almost predict his whole act and even recite every single word he is going to say accordingly without making any mistake. The only reason I had not confronted the man is basically due to the fact that I’m a strict introvert and because I love learning, even if it is from the most annoying things in my life.
If there is one thing I have learnt from beggars like his, it will be that about 95%, if not all, knows how to pray richly. Their prayers can nearly bring out money from your pockets unconsciously.
However, of the man prayers, just one of it seems to open the thinking part of my brain. Every time I hear it, I get angrier with the man. My anger was not because the man repeats these words exactly the same way, but because first, he seems the same every time I see him and I think he is more stupid for every single time he says that particular prayer again. At least if I am going to be a beggar like his, I should be creative to an extent.
Let us reason together. Every day, since I knew this man, he never stopped adding, “you will buy your own motor and you won’t enter public transport again” to his pile of fine prayers. And, he kept repeating this every time to everybody he meets.
Now, imagine if that particular prayer had been answered; because I cannot imagine someone praying if he does not want the prayer to be answered, instead it should not be said at all. If answered, it means someone like me, whom he had met about some months ago, would have stopped going to the bus stop to get a bus home, likewise the countless number of people he would have met also. Now tell me, who would be left to give him money if we all have our own motor and not entering public transport again?
After resolving that issue in my head, I got so angry I began questioning myself why the man, as old as he is, is begging at that age. First of all, things, I thought it was probably due to less-seriousness.
Nevertheless, I am not sure he has ever said those prayers before to himself. Even if he had no job, I think repeating those prayers to himself alone would have gone a long way into reshaping his life. I believe his life will not be as bad as it is now. And so, I still look forward to a day I can boldly confront him and shout it to his face that he should, “Pray for yourself too.” 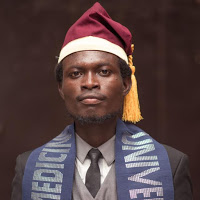