The Diet That Reduces Depression Risk

SAVED
BY THE BANKER
I woke up very
early that morning…was in a very foul mood. There is something about being
broke…it makes you angry with anybody and anything for no good reason….you
even get angry at your walls.
I was thinking of
the handouts I had to buy, assignments I had to do. I started regretting all
the rice, beans, plantain, egg and extra meat and orobo pepsi I had been
enjoying at mama Jemila’s place. What is this woman putting in her food that
makes me spend all my pocket money there, now I am broke. I dare not call my
dad… its just 18th of the Month, there’s a reason its called monthly
allowance.
When you are broke,
you almost question yourself for having 82 heartbeats per minute instead of 81.
I sighed and left my poor heart alone.
I glanced at my
purse, one wrinkled N100 naira and two N50 was all I saw…only N200  left in my house!! Jesus is Lord!! How did
this happen???
My thoughts were
interrupted by the voice of Mai ruwa (the water seller) outside. These guys
push a barrow filled with about 10-12 gallons of water, they normally bring
water every morning to our compound, and we buy each gallon at N20.
This morning, even
his cheerful voice sounded very annoying to my ears. He greeted, “ah!
Madam inakwana”…I answered grudgingly..Lafiya. On a normal “unbroke”
day, I would have answered “Aboki na, Lafiya lou, ya Aiki??(translation-
my friend, i’m very fine, how’s work?), Putting my rusty hausa to use….but
today, no mercy!!
I proceeded to ask
him why his containers were dirty, just imagine!! The man looked at me in
shock, making feeble attempts to explain in his poor english, even reminding me
that I have always bought water from him from these same gallons.
Brokeness brought
out the dettol in me…this time it wasnt peakmilk. I lashed at him…and said
I wasnt buying, that he should go and come back later in the evening with
cleaner jerrycans. He promised to come back.
I am very sure I
heard my empty drum in the corridor curse me….or maybe its just my
hyperactive imagination.
I went inside and checked
my phone, to see the last alert I received from GTB, if it held any hope for
this broke “geh”. I saw about N700 or so, but it wasnt up to N1000. I
was determined to storm that bank and withdraw every last kobo!! I was out for
bloooood!! As if I wasnt the cause of my predicament. Mtcheeew!!
I fetched water
from my drum, for every scoop, I can swear i heard it curse me, but I gallantly
bore my cross. I freshend up, really? Powder and lip gloss is freshened up???
Oriegwu!!
I got to GTB, and
trust them to always have 50signboards and only one branch in a state. So the
queue was massive..i didnt care…we will sleep inside this bank today.
Looking at the
counter filled with “unsmiling” bankers counting monies that do not
belong to them, I heard that pile of crisp N500 notes whisper my name, but no,
I am humble, and will accept my N700.
I stood in the
queue for almost 30mins, then it got to my turn. I didnt need ATM for this
transaction, I was going to remove “efritin”.
This banker, dark
in complexion, very slim guy, gave me a piece of paper to write down my account
number and how much I was withdrawing. With the biggest frown I could muster, I
told him everything. He checked my balance and just started laughing.
I dont mean these
small giggles…loud heavy laugh…ohh!! I wanted the floor to just bury
me….all of a sudden, the whole thing became funny to me…and I started
laughing too…I couldnt believe myself…so I actually came to GTB to fall my
hand like this. He then told me, Victoria, just hold on.
He removed N500
from my account, added N1000 to it and handed it over to me, still smiling. I
was shocked!! (for where?? In my heart I was somersaulting and dancing). Acting
surprised, I told him I didnt have that much in my account. He said I should
accept it, it was his gift to me, that he was once an undergraduate not long
ago…and I smiled and collected it.
That is how this
broke “geh” was saved by the banker…and i made a new friend that
day.
Bankers are not ALL
bad…he is still my friend…almost 5years later…
About the Author
Here is what Andikan Inyang also known as ‘Sparks’ has to say about herself…………………. 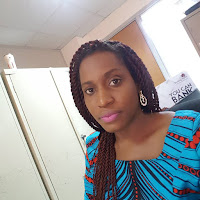 As
a Chemical Engineering graduate, former Immigration Officer and present
day banker…..and most importantly, a foodie, I hide behind my
pen…….therein lies my strength. I hope to pursue a career in writing
and explore the world of poetry. So help me God.