10 beauty trends you need to know

Everything you could possibly want to know about tattoos 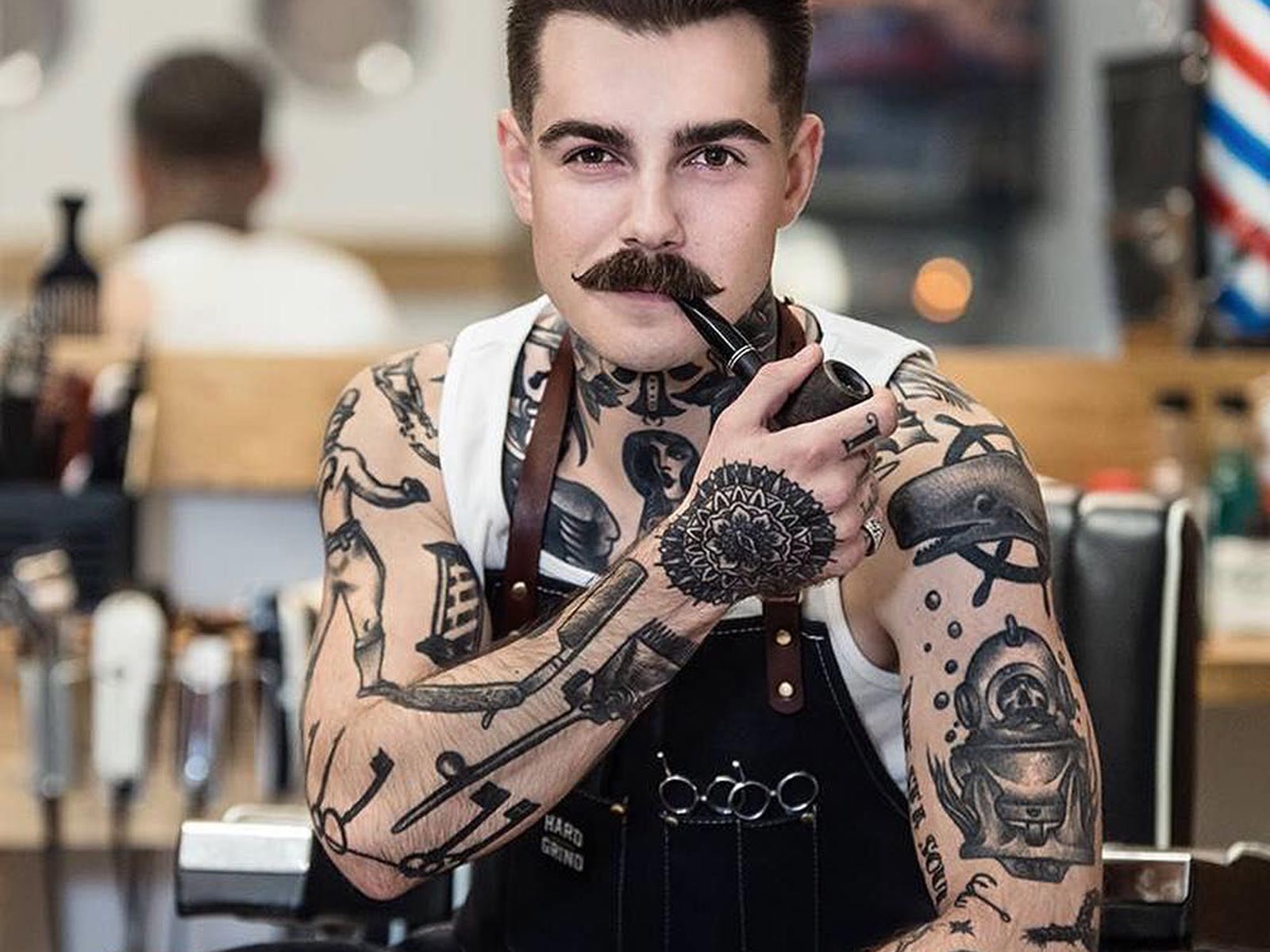 Written by Salvatore Marashi
Tattoos
are one of the oldest forms of expression. There is even evidence showing that
our ancestors as far back as cavemen times where sporting tattoos all over
their bodies. That tradition is still alive and well today. The days of
the clean-cut leading man of Hollywood has been replaced by the grungy,
rebel icons that fill our media.
That
being said, tattoos are a risk. At their best, they are a form of
self-expression, a piece of art that you’re always showing off. At worst, they
are a constant reminder of a massive error in judgment. So getting the right
tattoo is something you can’t risk screwing up on. To make sure you get
something you’re happy with, we’ve put together everything you need to know
about tattoos all in one place.
Tattoos 101
History of Tattoos 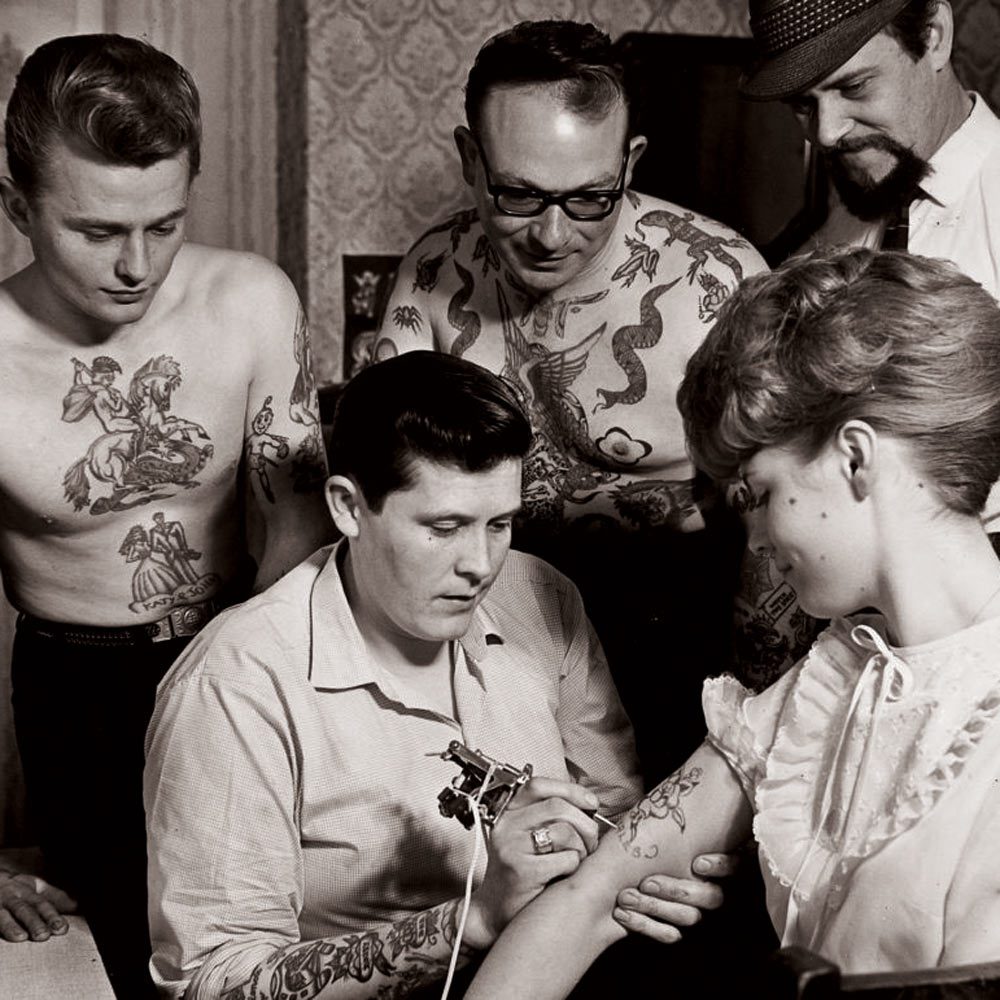 The
word tattoo comes from the Tahitian word “tatu” which means to mark. The actual
use of tattoos goes way back. There’s clear evidence that ancient Greek,
Celt and Egyptian societies heavily partook in tattooing. Tattooing was
often done in acts of religious ritual. These markings were thought to hold
power and were used to signify a connection to specific things in nature.
With
the rise of Christianity, the tattooing tradition in the West died down. It
wasn’t until European sailors brought tattoed natives back to their home
countries, that the art started to take root again. This meant that many of the
first modern people to receive tattoos were sailors and explorers.
By
the sixties, tattooing became a popular trend and was soon adopted by
people of all races, creeds, and genders. Tattoos are everywhere now and the
styles and techniques are more diverse than ever. Ready to partake in a
lasting tradition of men’s style? Good, let’s get to business.
Getting Started
Does it Hurt? 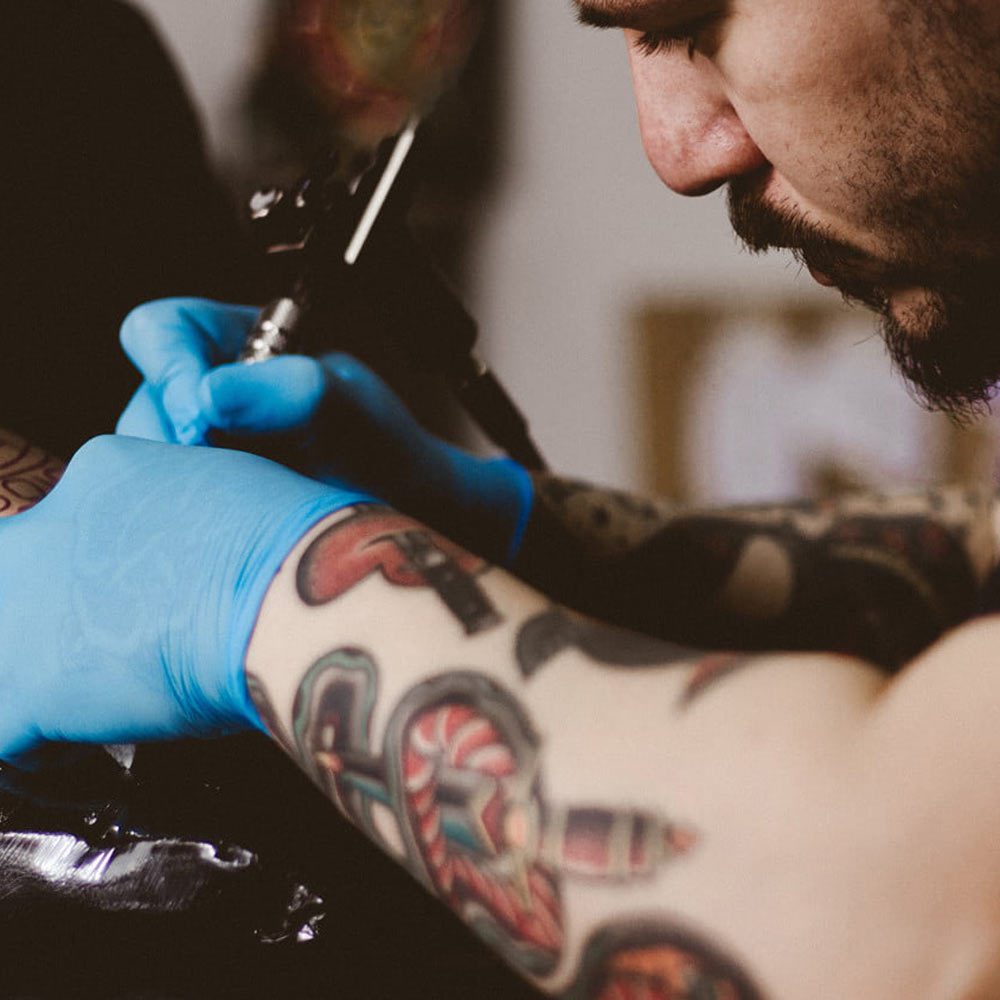 The
most asked question in the world of tattooing is does it hurt? Yes, yes it
does. However, that shouldn’t deter you. While tattoos are painful, they aren’t
unbearable. A good tattoo artist will be able to work with you to manage the
pain and make sure you’re as comfortable as possible during the process.
As
far as which places hurt the most, anywhere where the needle is pressing
against bone will be the most painful. So places like the ribs or fingers will
hurt much more than say the chest or arms.
Be Smart. Pick the Right Artist 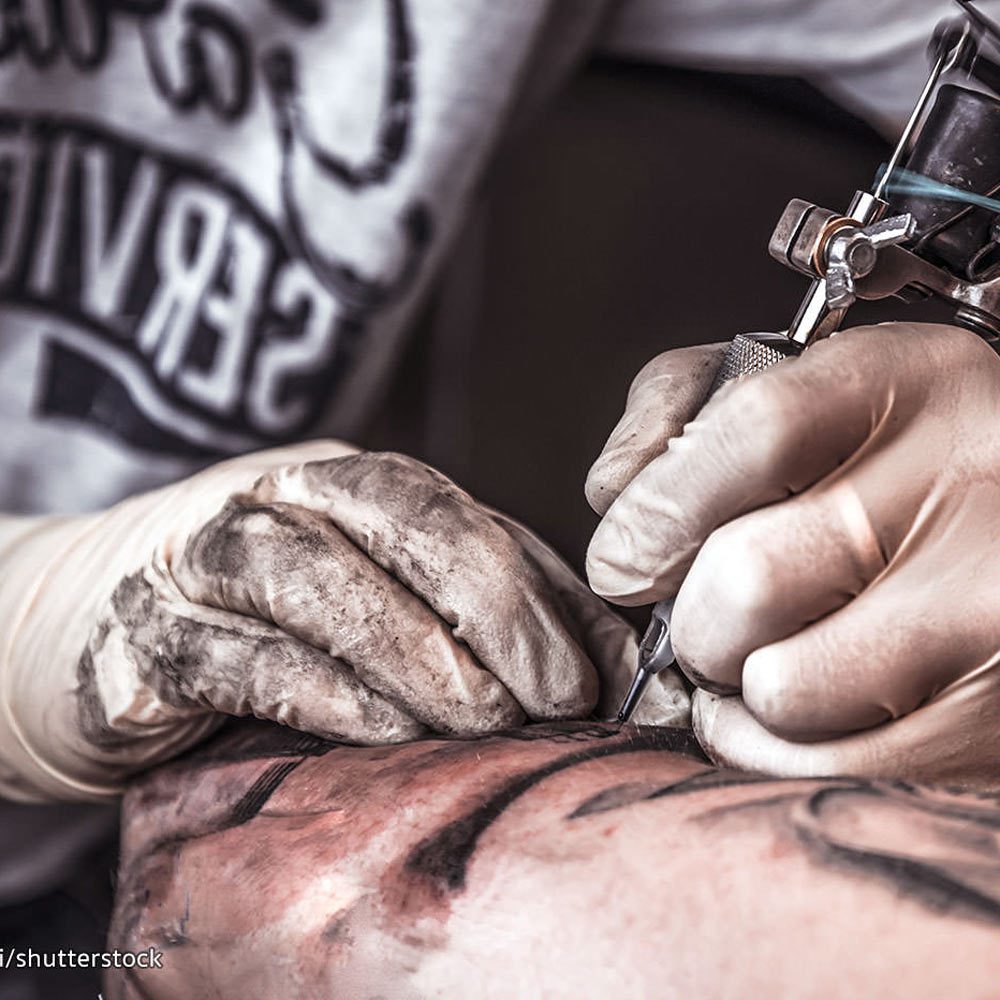 Too
often, tattooers are treated interchangeably. We forget that they are in fact
artists. No two artists are the same and no artist is an expert at everything.
Expecting a tattooer who specializes in geometrical prints to ink a giant tiger
head on your back, is a recipe for failure.
When
getting a tattoo, it is crucial that you pick an artist with an
aesthetic similar to what you’re looking for. Checking out their websites
or social media is a great place to start.
Listen to the Artist 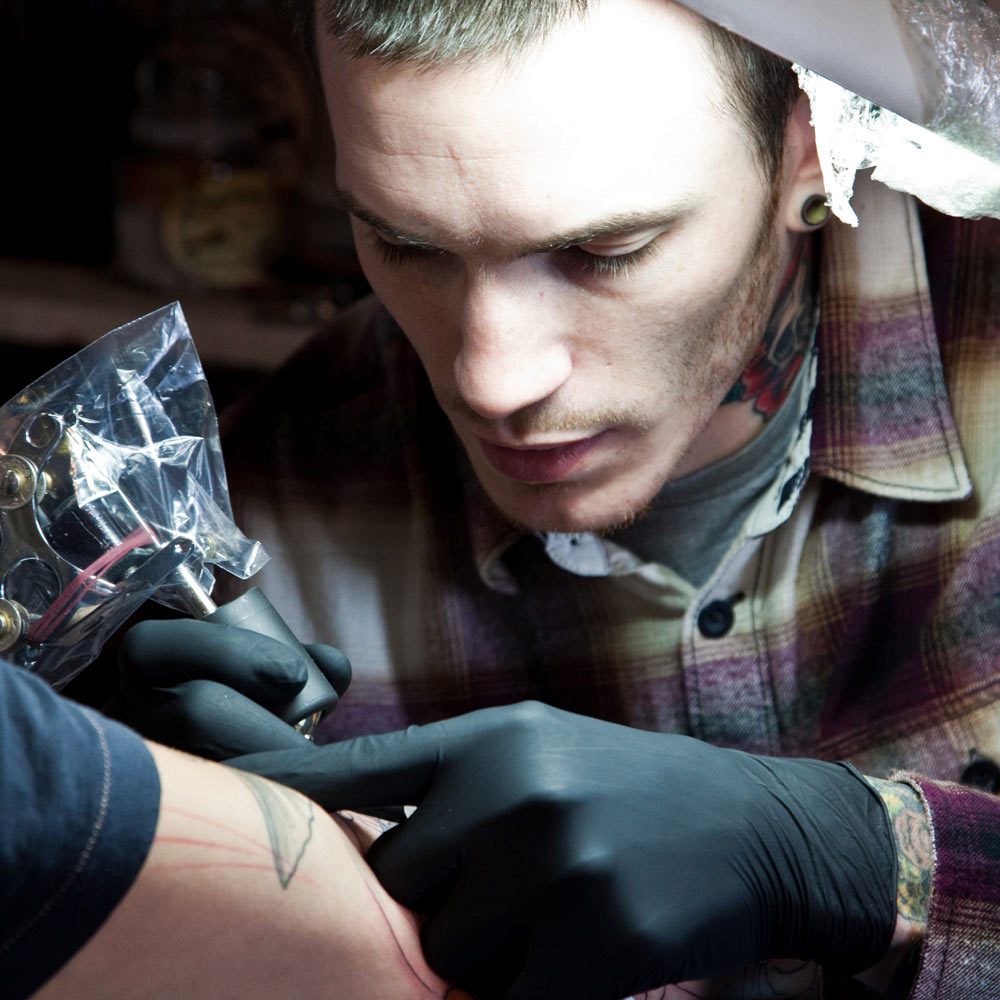 Remeber
the saying mom knows best? Well, in this case, it’s your tattooer who knows
best. It’s their job every day to live and breathe tattoos. Defer to their
judgment when it comes to picking your designs. They’ll have a good grasp on
which ones have stylistic longevity. They’ll also know whether the tattoo will
work with things like your skin type or the location you’ve been planning on
putting it. Lastly, their advice is a necessity in plotting out where multiple
tattoos will go, if you’re going down that route.
Think Color 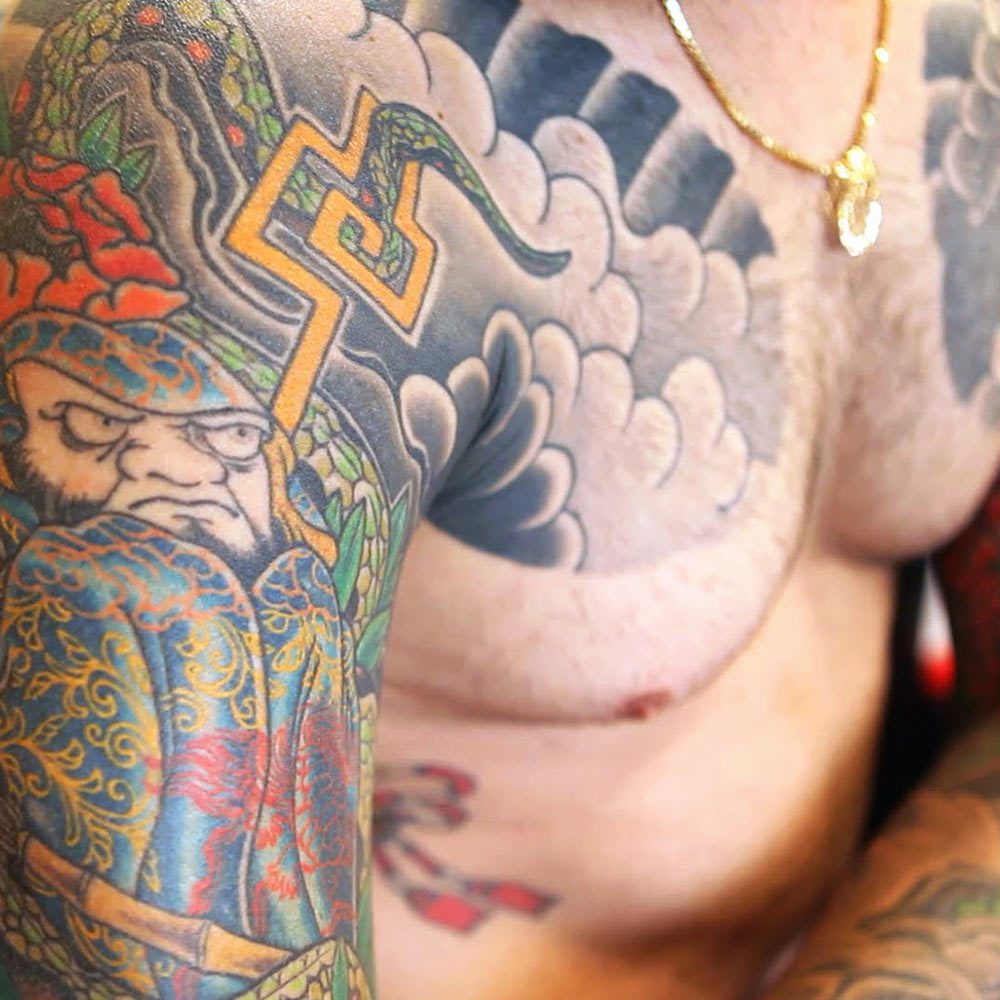 Tattoos
don’t have to be just black. Colored designs can bring life into whatever is
being inked on you. Better yet, there are tons of colorsto choose from.
If
you’re going to go that route though, be prepared. Colored designs will fade
over time. That means you’ll need occasional touchups over the years to keep
things looking fresh. So be ready to shell out some cash long term.
In
all honesty though, black ink is the better choice. It’s cheaper, cool and
holds up much better than its colored counterparts.
Pay Up 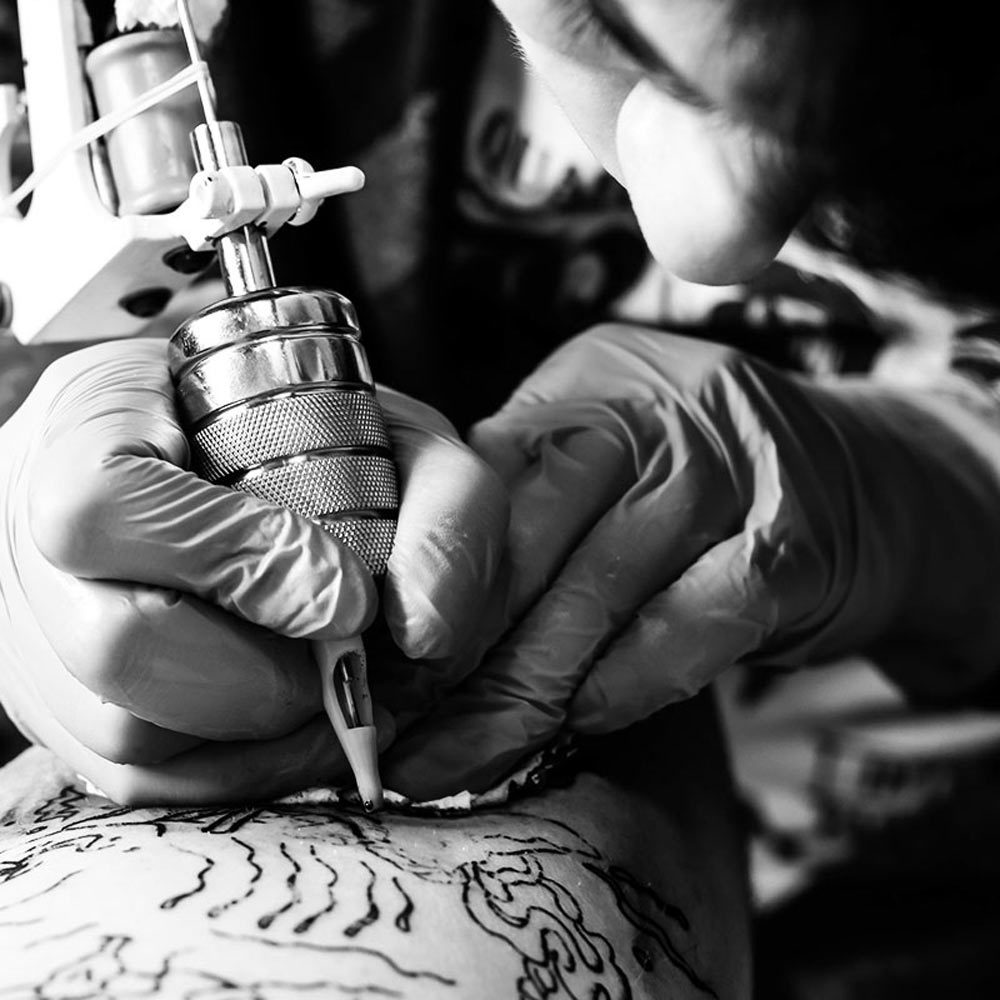 As
in most things in life, you get what you pay for. Those discount tattoo deals
are for suckers and you’re not a sucker. A reputable tattoo artist won’t come
cheap and they shouldn’t. Shelling out a few extra pennies to get the best is
an investment worth making.
Artist
will either charge a flat rate or an hourly one. Typically you’re looking
between seventy and two hundred dollars an hour. That being said, larger pieces
will probably come with an upfront cost instead.
Time Investment 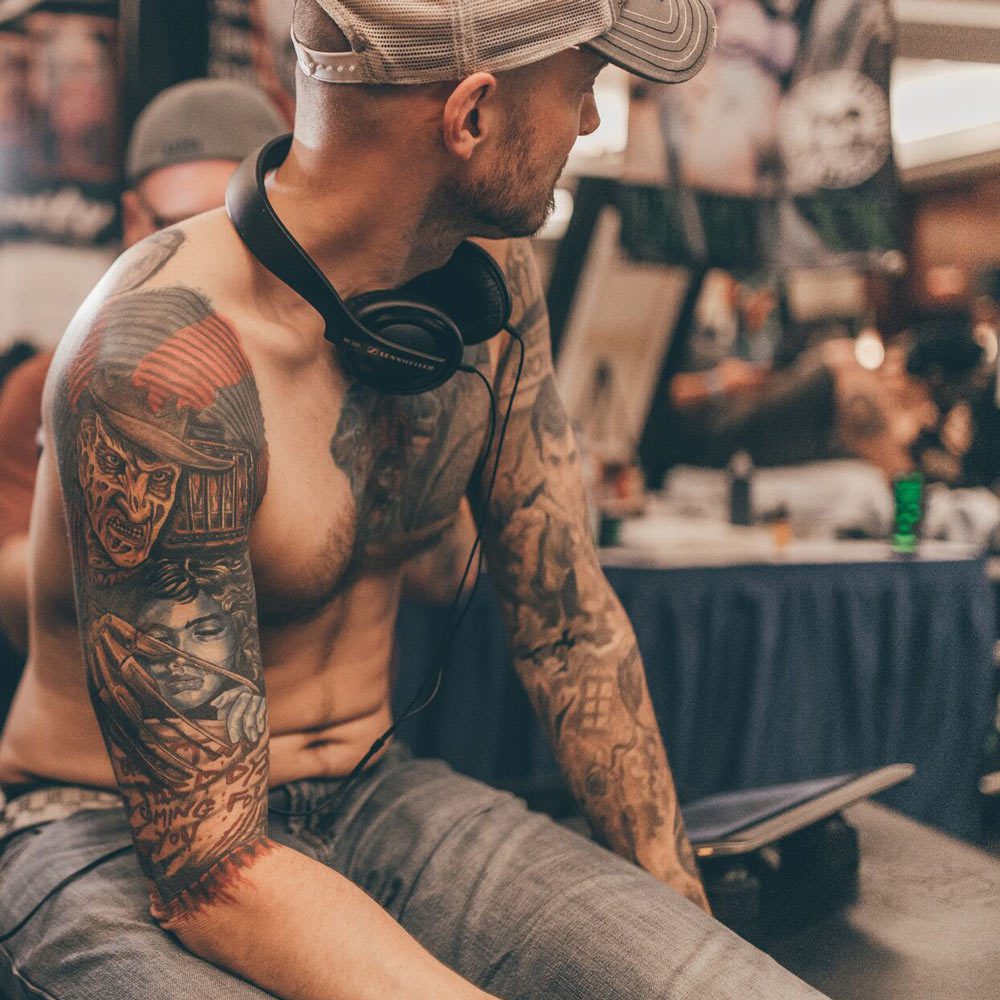 If
you’re getting anything other than your basic tattoo, be ready to spend
anywhere from a couple hours to coming in multiple days to the studio. Larger
pieces require an incredible amount of detail and concentration so give your
artist time to work. Trust us, you’ll also need to take a few breaks.
Tattoo Styles
Unleash the Animal 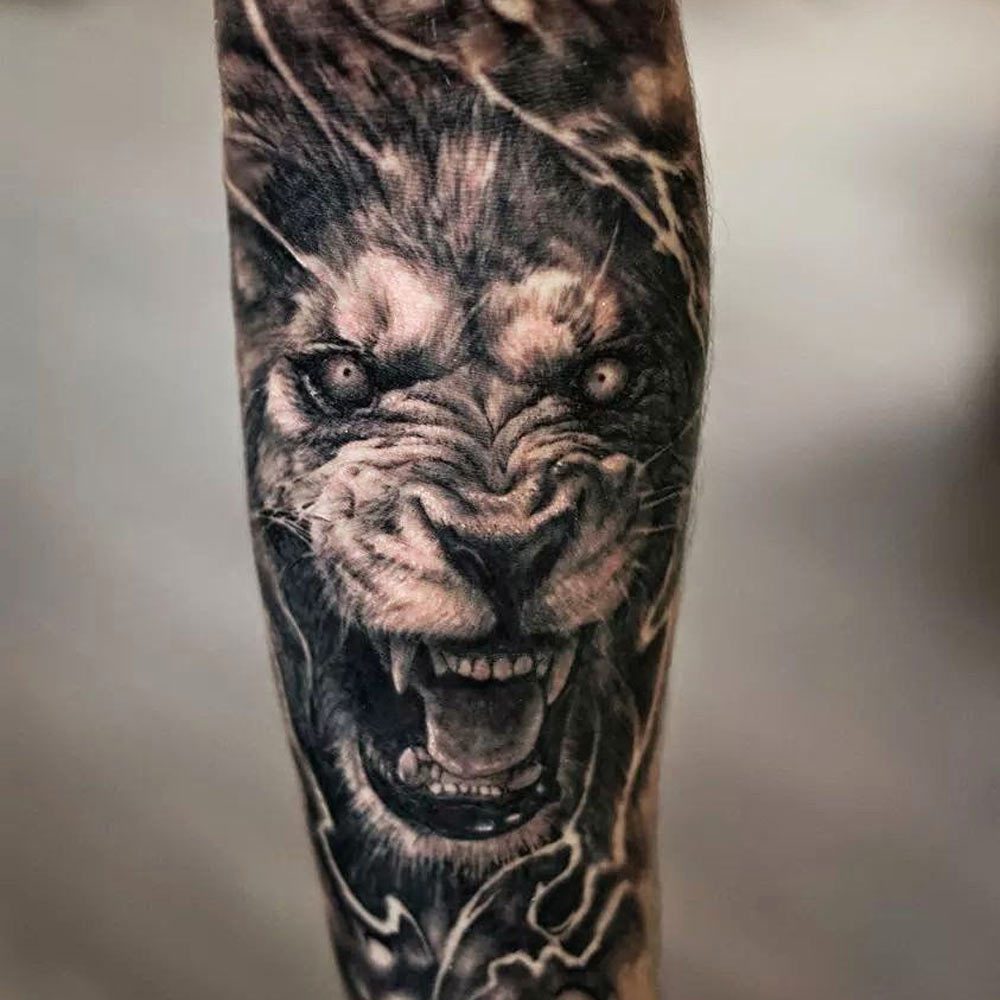 Animal
tattoos are some of the earliest tattoos in existence. These designs are
perfect for self-identification with certain traits an animal has. They also
can just look seriously cool.
Sacred Geometry 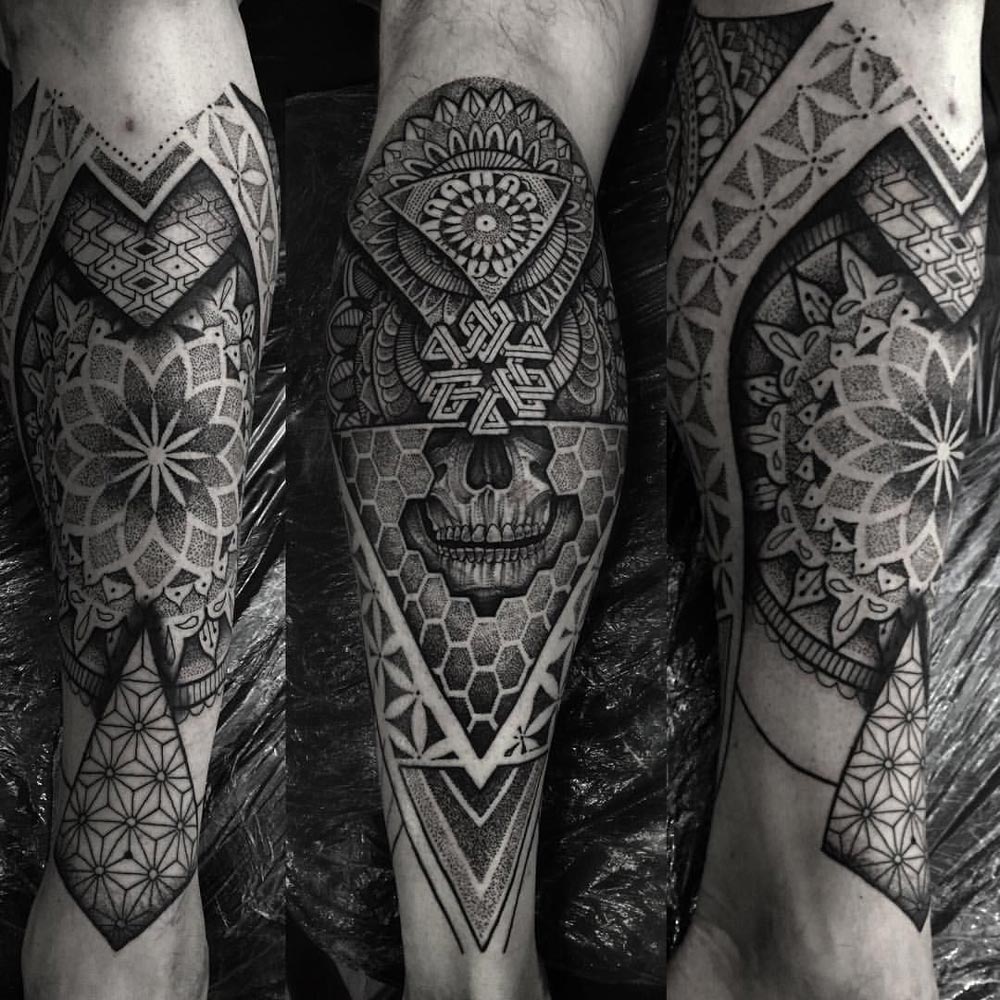 Your
tattoo doesn’t need to be a direct statement. Non-traditional choices like
geometric patterns can be eye-catching. They’re also ideal for lovers of
minimalist styles. These designs subtly blend into your overall look. Geometric
tattoos are perfect for blending with other tattoos as well.
Portrait Time 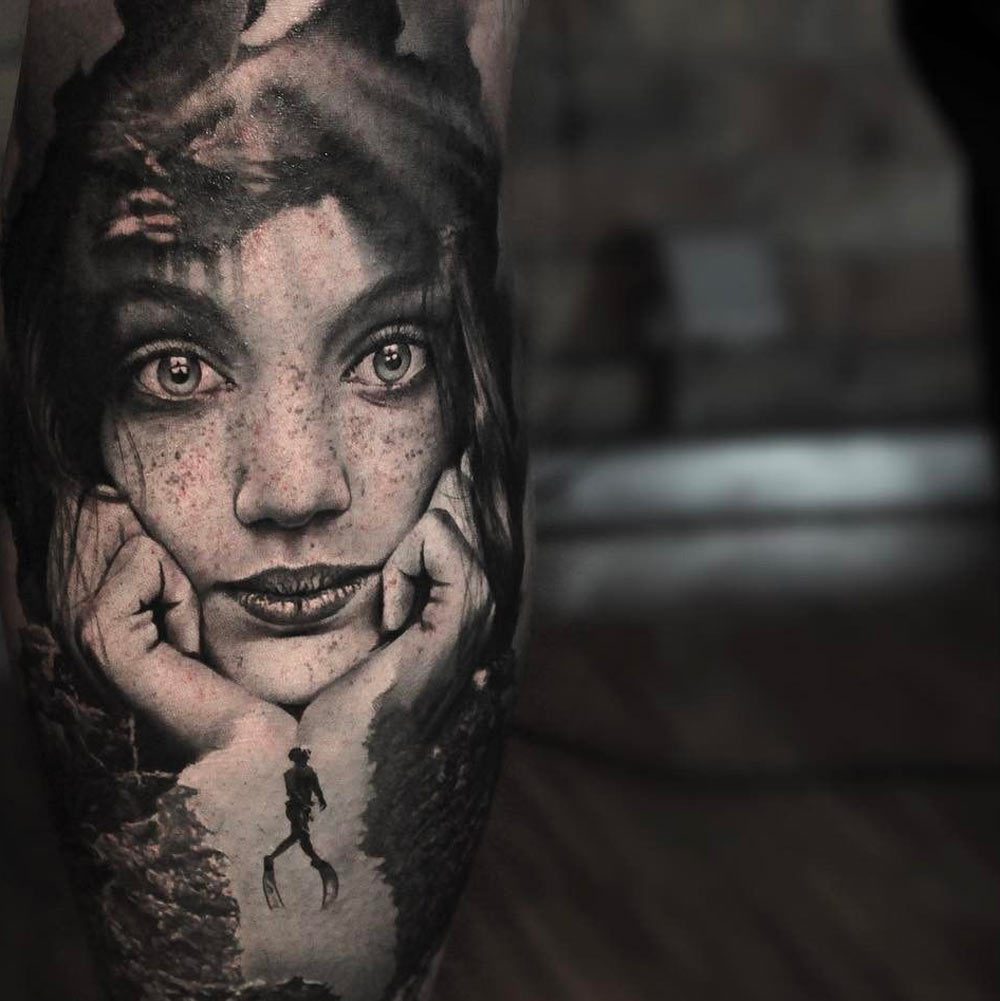 Portrait
tattoos can be a great way to immortalize someone on your skin. With these,
your tattoo artist’s skills are going to have to be on point. A good portrait
tattoo shows respect for someone in a lasting way. A bad one, however, is
literally as bad as tattoos get. Proceed with caution.
A Man of Few Words 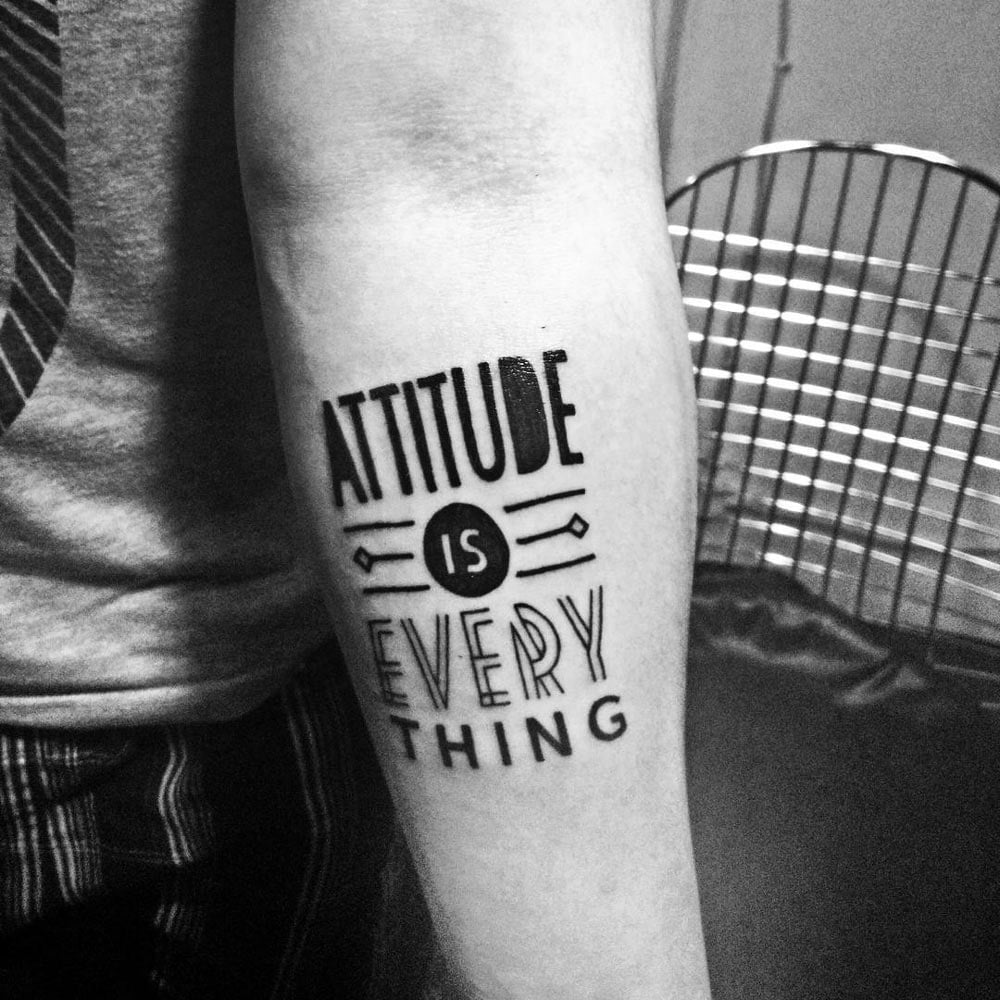 Sometimes
less is more. If you’re opting to skip the bolder designs, well-placed
lettering is a smart alternative. Choose something meaningful like a quote, a
name or a date, all are subtle but impactful.
Go for Something Classic 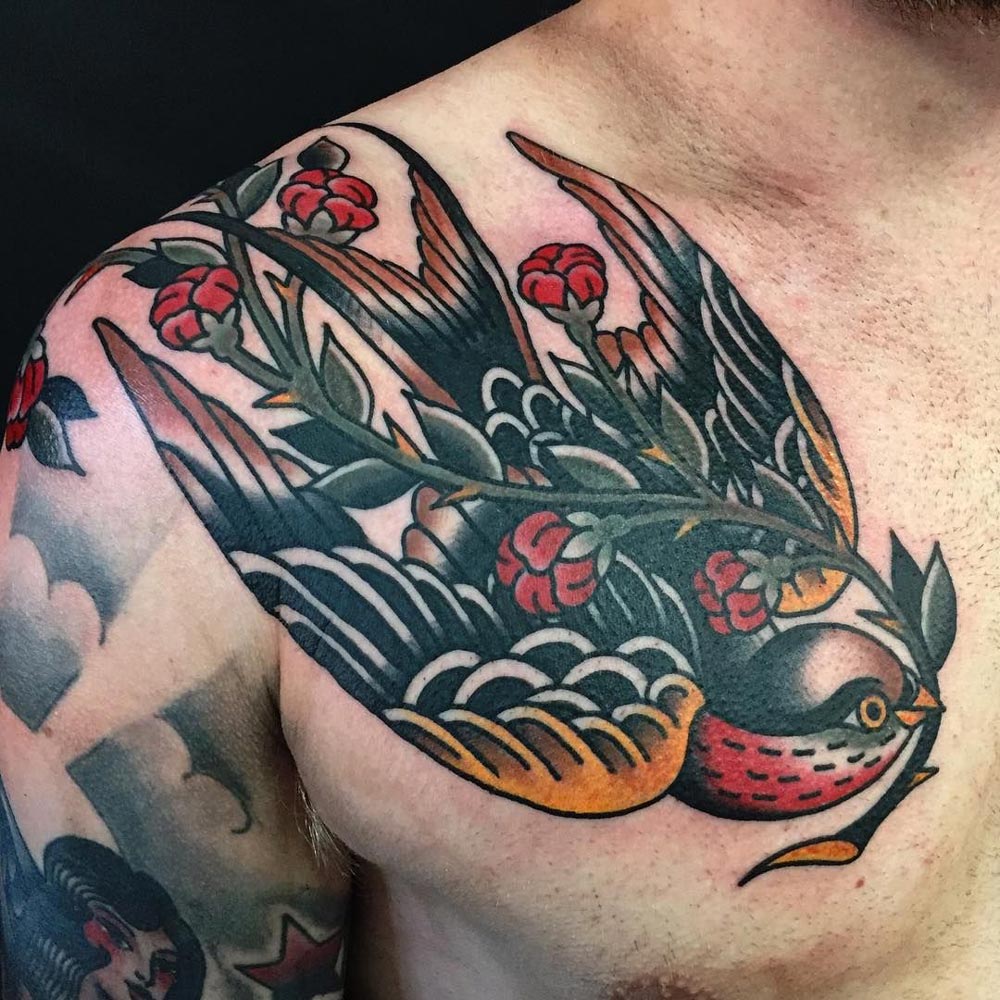 These
are the styles that were first popularized by sailors coming back from far off
voyages. Things really took off in the U.S in the undergrounds of society.
Rebels, artists, and veterans were some of the first to adopt it. Artists like
Sailor Jerry made this the most popular look of the era.
Things
like anchors, animals, mermaids, and pin-ups are hallmarks of the classic
tattoo look. Punchy, playful designs matched with bold lines and loud colors
are hallmarks of the classic tattoo.
As Real as it Gets 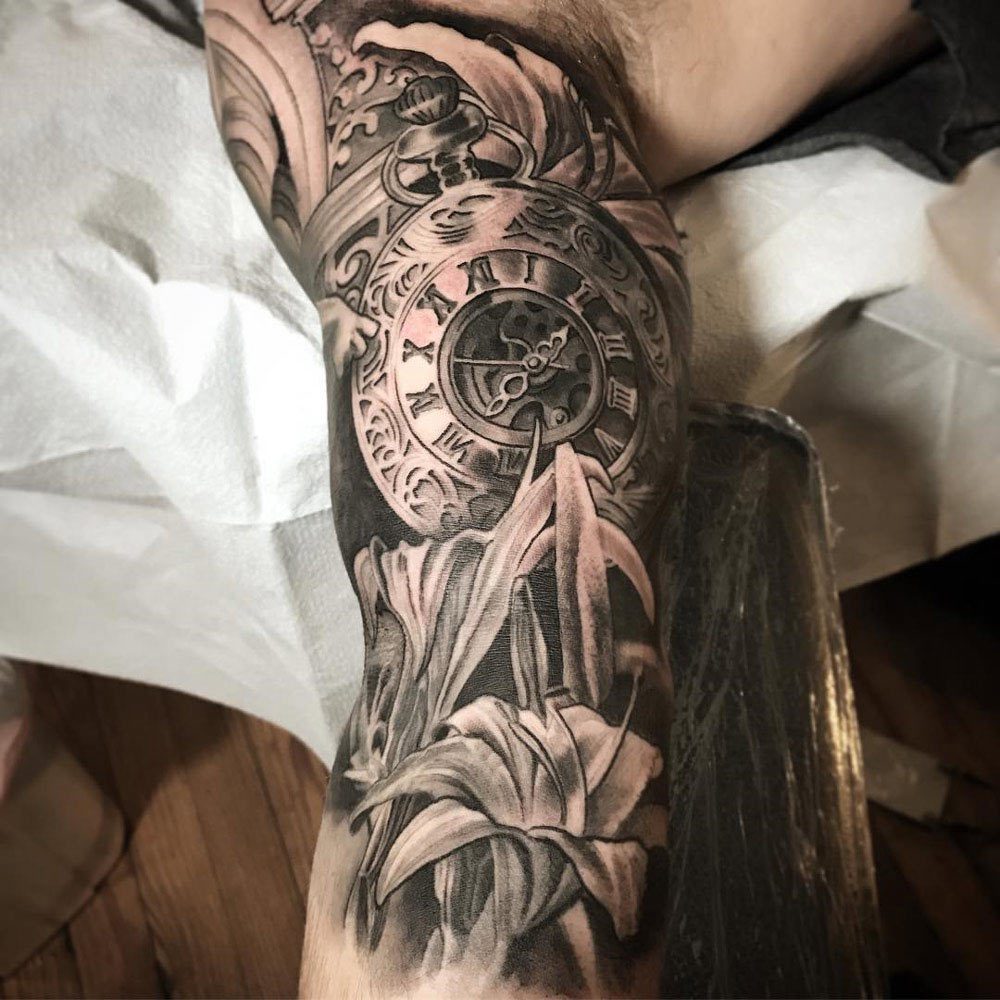 Realist
tattoos are exploding in the tattoo world. Stunning realism combines with
distinct black and grey to create unbelievable body art. Don’t be
surprised if these designs get plenty of oohing and awing from everyone who
passes you by.
Feeling Tribal 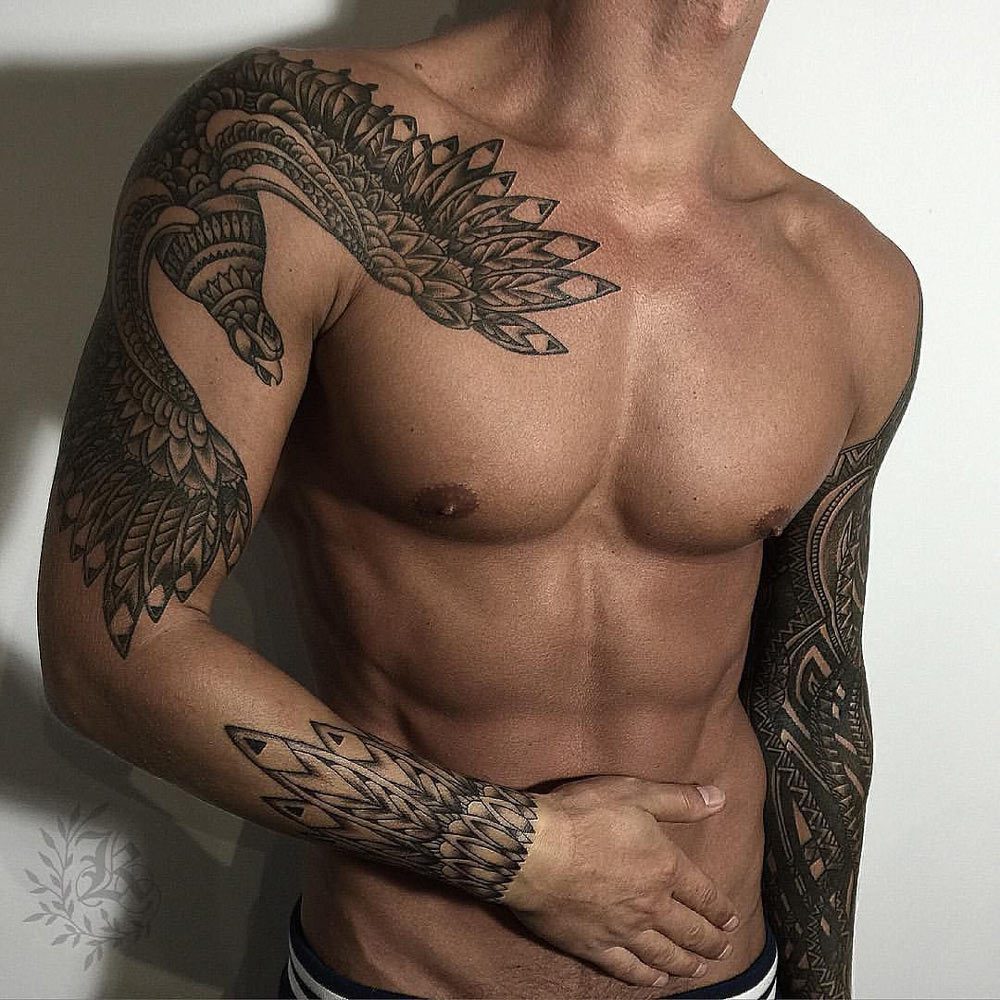 Tribal
tattoos are the oldest tattoo designs. African, Polynesian and Celtic tribes
are some of the most well-known for their distinct styles.
I
won’t lie, these looks have been a bit overdone. Look around your gym and
you’ll see every gym rat sporting a sleeve length tribal tattoo on their arm
while they hog the bench press. If you’re going to go for this look, have at
least some connection to the looks you’re adorning yourself with. Or at least
have a healthy appreciation for what they symbolize and the peoples that they
came from.
Water Color Tattoos? 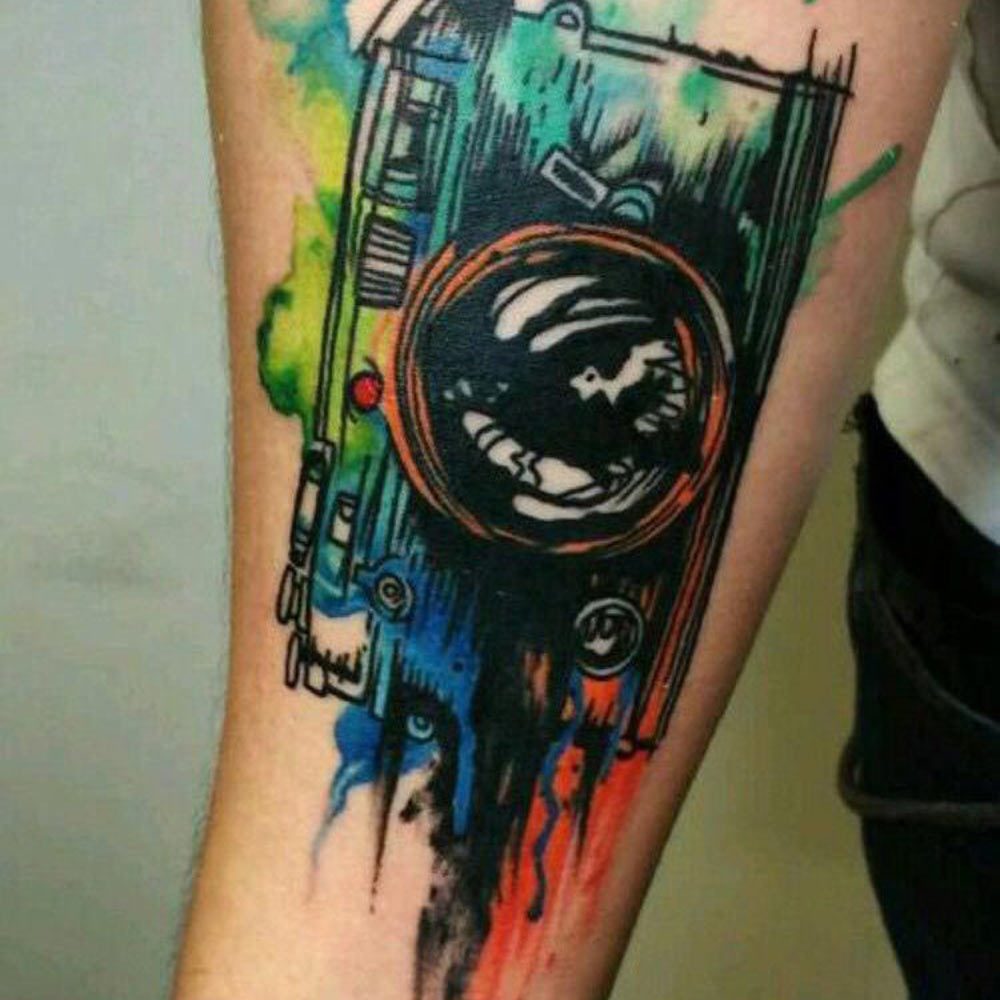 Yep,
you read that right. Watercolor tattoos are one of the newest trends in tattooing.
While painting in actual watercolors might be child’s play, doing that in body
art is anything but.
Artists use
dozens of colors to create the appearance of watercolor paintings. This births
an innovative and fun style of tattooing.
Irezumi 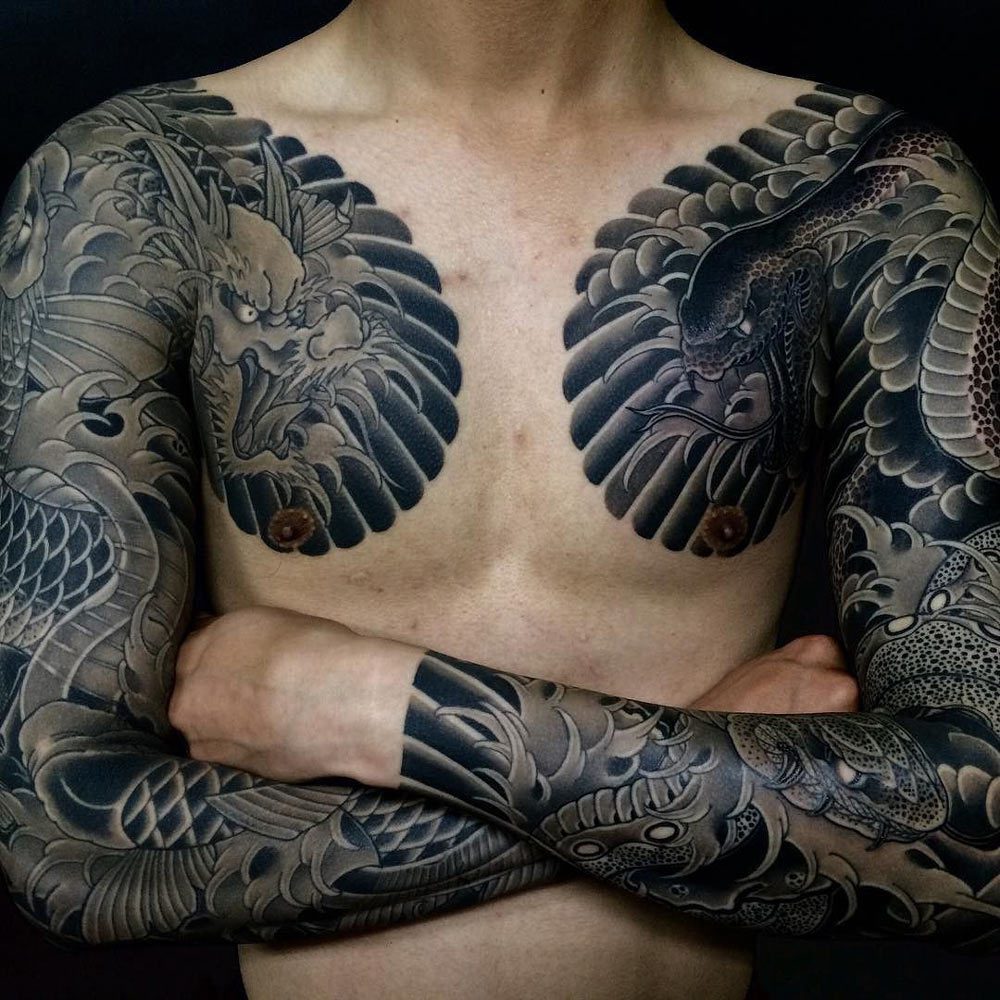 Irezumi
or Japanese style tattoos originated in feudal Japan during the Edo period.
This look is one of the oldest continual traditional and certainly one of the
most popular. Folklore heroes, dragons, warriors and nature scapes are all
iconic designs of the style. The use of sharp colors makes this one that isn’t
easy to ignore.
These
dramatic and powerful tattoos are not for the faint of heart. These are
seriously stunning and deserve to be shown off.
Black Out 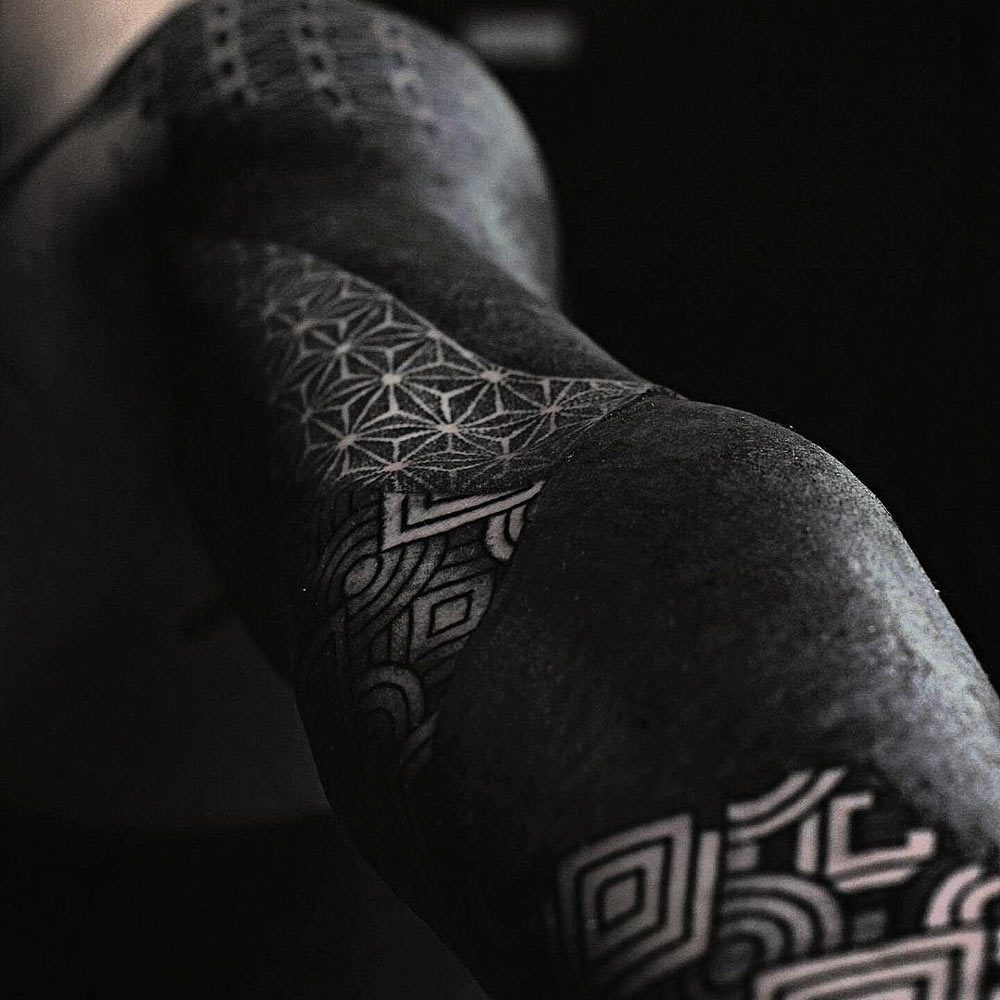 Blackwork,
as it’s known in the tattoo world, is the art of tattooing using only black
ink. While that may sound simple, it doesn’t quite capture the true artistry
that goes into these designs. Working with only black and your skin color, an
artist can create some amazing designs.
For
those of you ready to go head first into blackwork, blackout tattoos are this
style taken to the extreme. Tattooers, create whole swaths of skin that are
completely blackout. What you’re left with are striking contrasts between your
skin and the tattoo.
Tattoo Maintenance 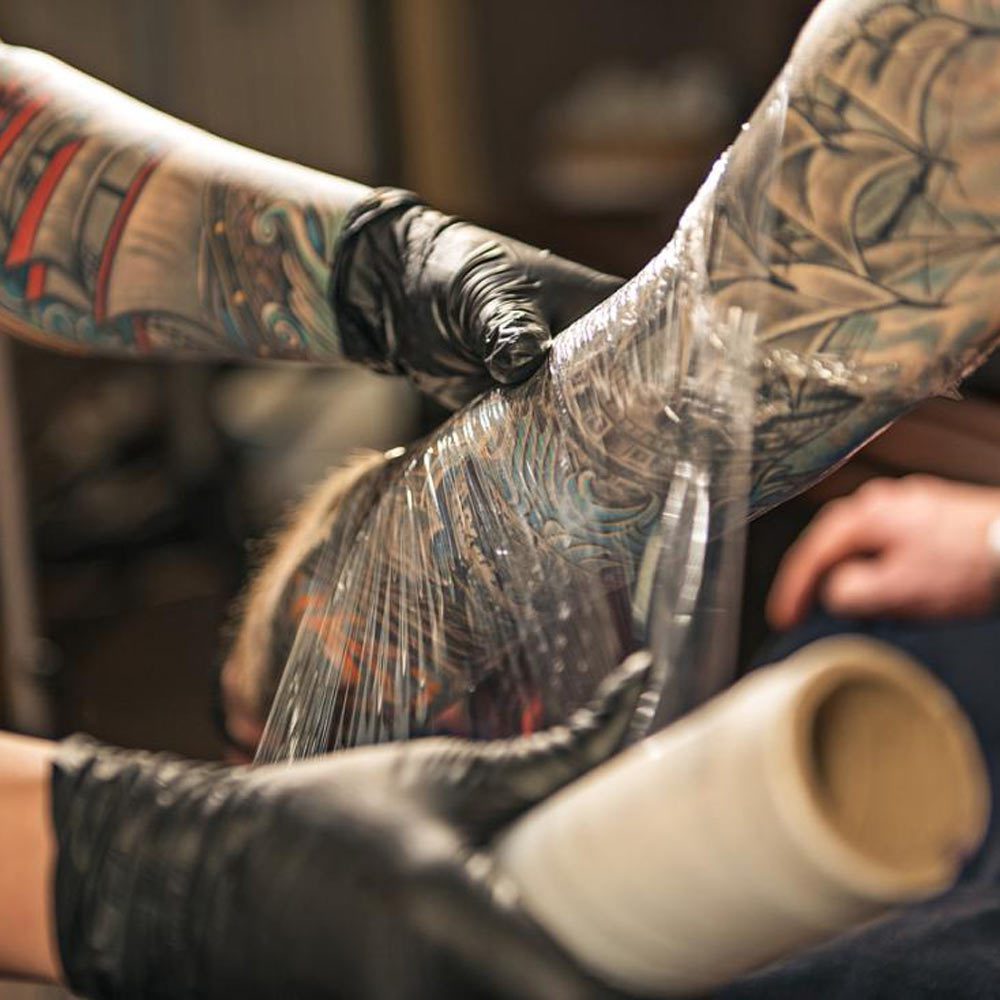 Handle with Care
If
you think that getting a tattoo is a one and done process and not a constant,
permanent responsibility, then I’ve got bad news for you.
Taking
care of your tattoo is not an option, it’s a must. Don’t believe me? Go look up
tattoo infections for yourself. On the other hand, if you don’t want to be
scarred for life, you can just take my advice on this one.
A Clean Tattoo is a Happy Tattoo
After
getting inked, you must put a routine in place to keep it clean. In
the first few weeks, you need to wash regularly with soap and water. That’ll
help keep the open wounds from the needle from getting dirt or bacteria in
them. Finish by moisturizing with a rash cream. Keep this up until the skin
heals.
Once
your tattoo has settled in, consistent moisturizing will help your tattoo stay
in tip-top shape.
Final Thoughts
Tattoos
aren’t for everyone. Whether you’re tatting up to immortalize something in your
life or simply because you think they look cool, these tips can make all the
difference in that decision. Lastly, please be smart about getting inked. This
is a big decision so treat it as such.
Salvatore Marashi
SOURCE: THE GENTLEMANUAL