One would think that we know everything about our planet. However, you can discover truly breathtaking corners, both natural and manmade, even in the most popular tourist destinations.

Bright Side made a list of 18 cool spots that you probably haven’t heard of yet. And we are sure you’d love to visit the place included as a bonus at the end!

The Colosseum in Rome is one of Italy’s best-known attractions. However, the Croatian city of Pula prides itself on an amphitheatre that is no less beautiful. It was built with wood and then rebuilt in stone in the 1st century BC. It could hold up to 23,000 people and was used for large-scale shows. In the 5th century, after the ban of gladiator fights, the building gradually started to crumble away. In the Middle Ages, the arena was repurposed for grazing livestock and holding fairs and knight tournaments. In the 20th century, it became a ground for military parades and theatrical performances. 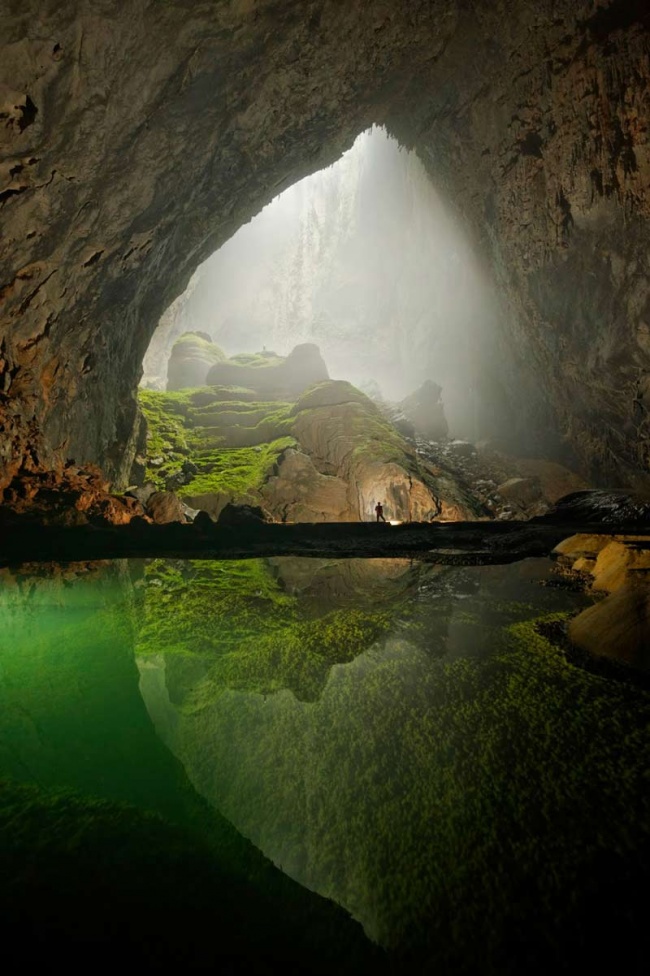 The cave was discovered in 1991, but it wasn’t until very recently that it became a stop on tourist trails. Sơn Đoòng is called the largest cave in the world: it is about 9 km (5.6 mi) in length, and its vaults are so high that it could easily accommodate a 40-story skyscraper.

The cave was formed due to erosion of limestone rock. It now houses its own ecosystem with a river, a waterfall, unique plants and animals, stalactites, and the so-called cave pearls: calcite rock formations that developed on the sand under the centuries-long influence of water. 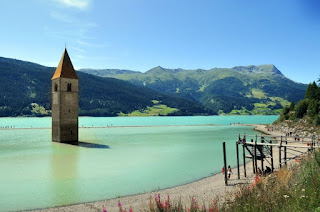 Lake Reschen appeared in 1950 after the construction of a hydropower plant and a dam resulted in 2 villages being submerged under water. The lake’s surface is overlooked by a 14th-century bell tower. Because of the changing water level, sometimes only the top of the tower can be seen. Strong winds raise high waves on the lake, so the place is known and loved among surfers.

In summer, you can circumnavigate the tower on a motorboat; with the onset of winter, it can be reached by walking on ice. According to a legend, you can still hear the bells occasionally, although they were taken off the tower before the flooding. 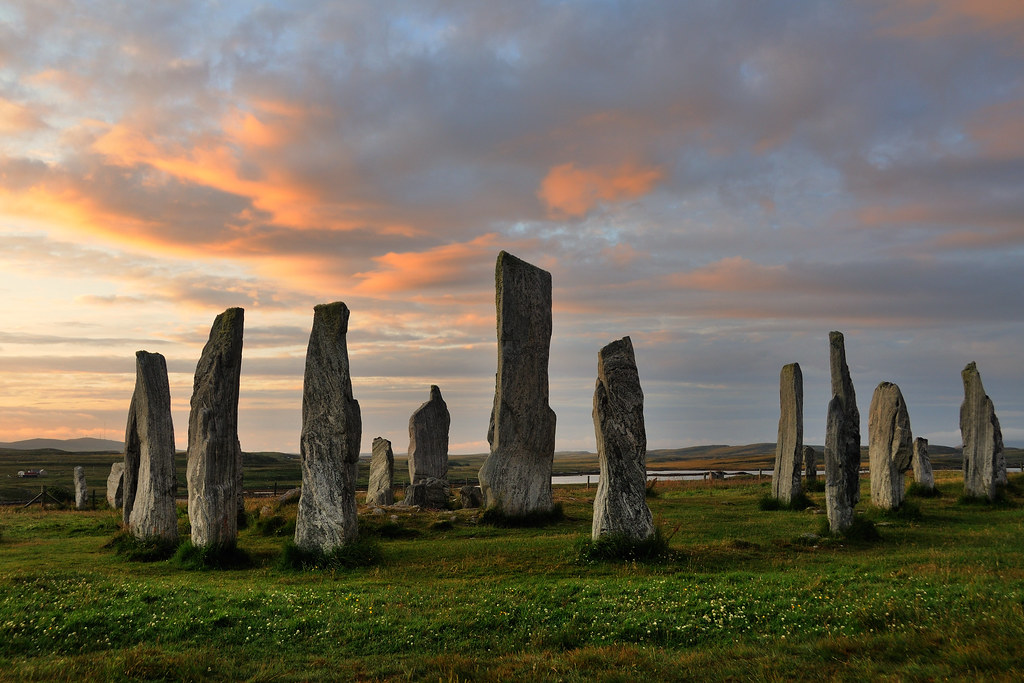 Stonehenge is probably the British neolithic site that gets the most hype. However, the mysterious Callanish Stones on the Scottish island of Lewis are thought to be one of the largest megalithic monuments. They are an arrangement of 13 standing stones up to 5 m (16 ft) high that form a figure resembling a Celtic cross with a circle in the middle. According to one version, the stones are a gigantic lunar calendar; another claims it is an ancient ritual site. 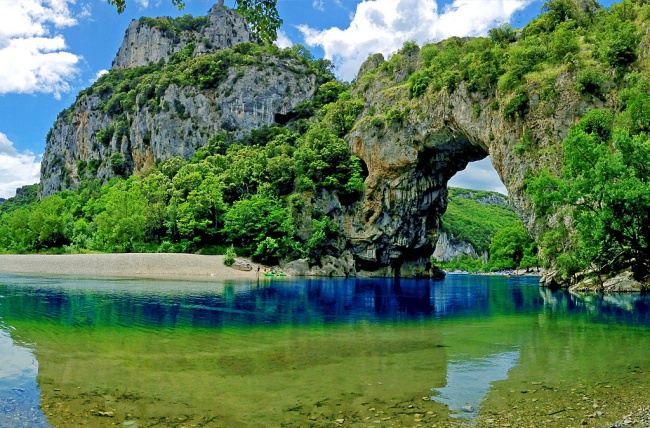 At a 5 km (3 mi) distance from the lively streets of Vallon-Pont-d’Arc, a town in the south of France, stands a natural bridge that gave it its name. It straddles the Ardèche River that washed away the rock to form an impressive arch 59 m (194 ft) wide and 34 m (112 ft) high. This place is remarkably peaceful and quiet; in summer, it hosts canoeing competitions. Not far from the bridge is the ancient Chauvet Cave with rock paintings dating back 30,000 years! 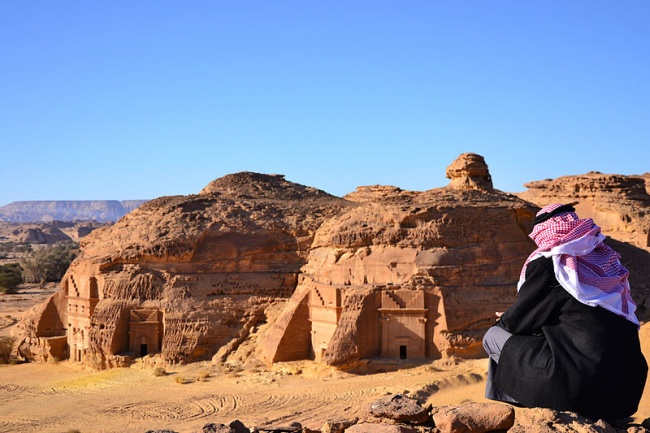 The archaeological site of Mada’in Saleh is not as widely known as Petra in Jordan, despite being the oldest construction in Saudi Arabia: it dates from the 1st century AD. This historical site includes 131 rock-cut tombs, towers, living quarters, temples, and hydraulic structures of the ancient Nabatean city of Hegra, once a center of trade. All of the buildings are decorated with sculptures, bas-reliefs, and inscriptions. 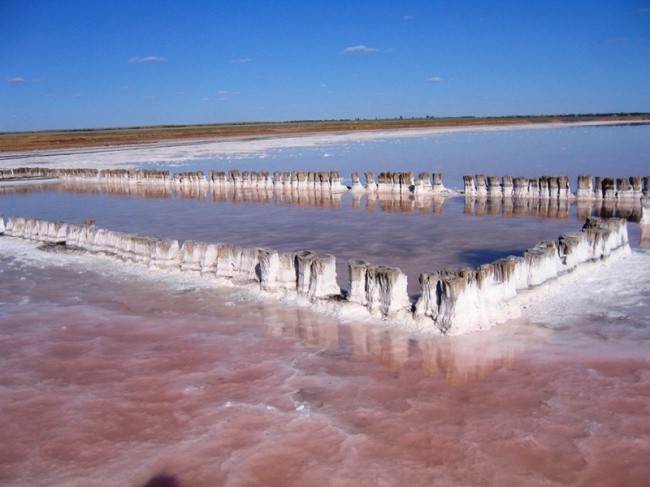 The area of this saltwater lake is 150 sq km (58 sq mi), which makes it the largest mineral lake in Europe. Its depth is no more than 7-10 cm (3-4 in) in summer and 1.5 m (5 ft) in spring. It is an important migration point for snipes and cranes, while humans are attracted here because of the lake’s bizarre scenery and healing properties. The Elton Natural Park, where the lake is situated, is home to hundreds of animal and plant species, including some unique ones.

Purnululu National Park, a UNESCO World Heritage Site, abounds in striped sandstone mountain slopes and lakes and boasts unique wildlife. There’s a huge number of gorges on the park’s territory. One of the most picturesque ones is Cathedral Gorge, which is a real natural amphitheatre with amazing acoustics. 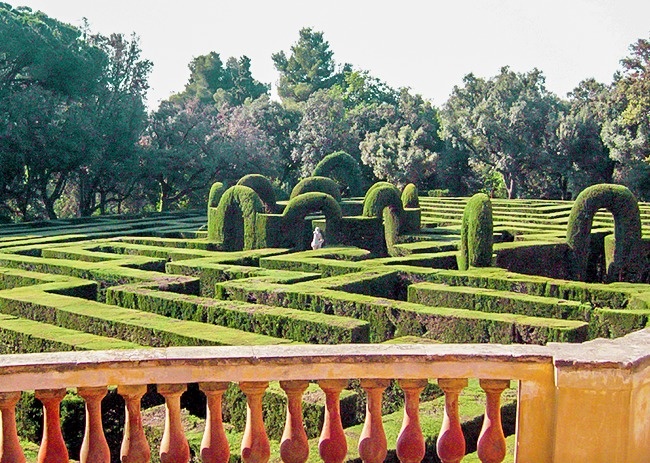 Laberint d’Horta is the oldest park in Barcelona, built in the late 18th century as a neoclassical garden. This place full of delicate hedges, flower beds, pavilions, and canals was a favorite location for holding public and cultural events. Today only a limited number of visitors per day can enter the park. 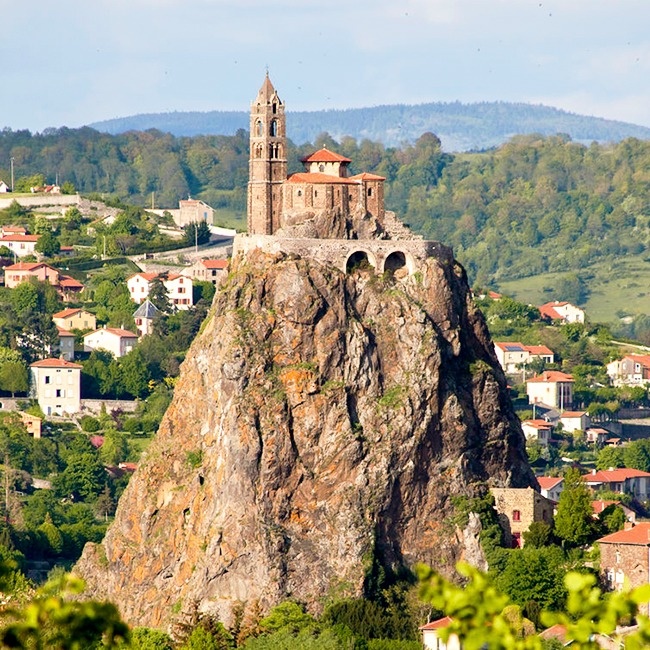 The small town of Le Puy-en-Velay in the south of France is home to a chapel built in 969 on the top of a steep rock (85 m / 279 ft high). Before that, the rock was the site of an ancient dolmen and a Roman shrine, and all the legends call it a sacred place. The chapel is unique not only for its location but also for its frescoes, mosaics, and paintings that have never been restored. 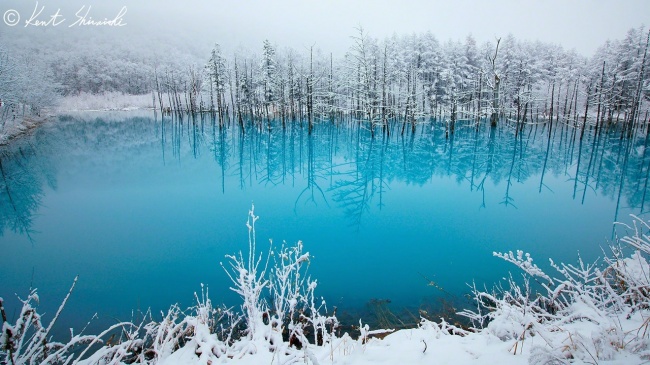 The blue pond in Biei, Hokkaido, appeared as the result of works on a dam built to control erosion processes and protect the nearby areas from mudflows. The unusual bright turquoise color of the water is caused by minerals and can vary depending on weather conditions and the angle of view. The dead tree trunks sticking out from the water only add to the landscape’s fantasticalness. For a long time, this natural object remained closed for visitors and only became accessible a few years ago.

Cape Reinga is the northernmost tip of the Aupouri Peninsula in New Zealand. Raging waves roar at its shores, and on the hill stands a lighthouse that flashes every 12 seconds and can be seen from 35 km (22 mi) away. To the east of the cape lies a secluded beach with pale pink sand. The native Maori people believed that the spirits of the dead travel to this cape to make a leap to the underworld. That is why this spot is considered sacred, and visitors are forbidden to eat here. Getting to the cape is rather difficult since the road runs through quicksand in some places, so it’s better to come here with an organized group of tourists.

The Tin Mal Mosque was built in 1156 to commemorate the founder of the Almohad dynasty, and it is one of 2 Moroccan mosques open to non-Muslims. In 1995, it was included in the UNESCO World Heritage tentative list.

Even though the mosque is located in a mountain village only 100 km (62 mi) from Marrakesh, few travelers know about this marvelously beautiful place.

Meroë is an ancient city in what is now Sudan, the capital of the Nubian kingdom of Kush that arose in the 8th century BC. Here you can find lots of pyramids where nobles were buried as well as remnants of palace walls, baths, and temples. Sadly, by the 3rd century BC the city fell into decay and was abandoned. The entire complex is now listed as a UNESCO World Heritage Site, but few know about this place overshadowed by Ancient Egyptian monuments. 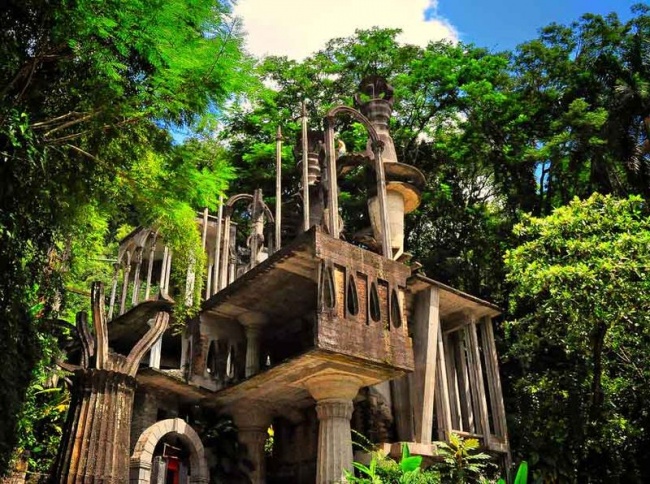 Created by the English poet and sculptor Edward James in the ’60s and ’70s, Las Pozas is a true Garden of Eden with surrealist sculptures and fantastic landscapes of an abandoned city. It is an incredible cocktail of artificial structures, lush vegetation, tropical flowers, waterfalls, and small ponds with no clear lines, simple shapes, or finished designs; everything here is meant to be bewildering and dream-provoking.

Separated from the sea by a thin curb of rock, Giola Lagoon — a small natural pool of crystal clear water also known as Aphrodite’s Tear — is one of the many sights of the Greek island of Thasos. According to a legend, it was created by Zeus as a bath for the goddess of love. On one side, the pool is covered with a rocky cliff from which you can dive into the water. But be careful: the lagoon is only 3 m (10 ft) deep. Someone unfamiliar with the terrain will have a hard time finding it, but the scenery this place has to offer at dawn is worth looking for!

On Thasos, you can also find the unique Marble Beach that boasts a stunning combination of the purest blue water and marble-white sand. However, getting to this place isn’t easy, and the beaches are almost wild, so you’ll have to stock up on provisions and patience. But the journey will be worth it.

Elliðaey is one of the Vestmannaeyjar (Westman Islands) located off the south coast of Iceland. This is a perfect place to be alone and get away from all the noise: there is only one building on the island. There is no permanent population either, but tourists come here to enjoy fishing, puffin hunting, and taking a sauna. 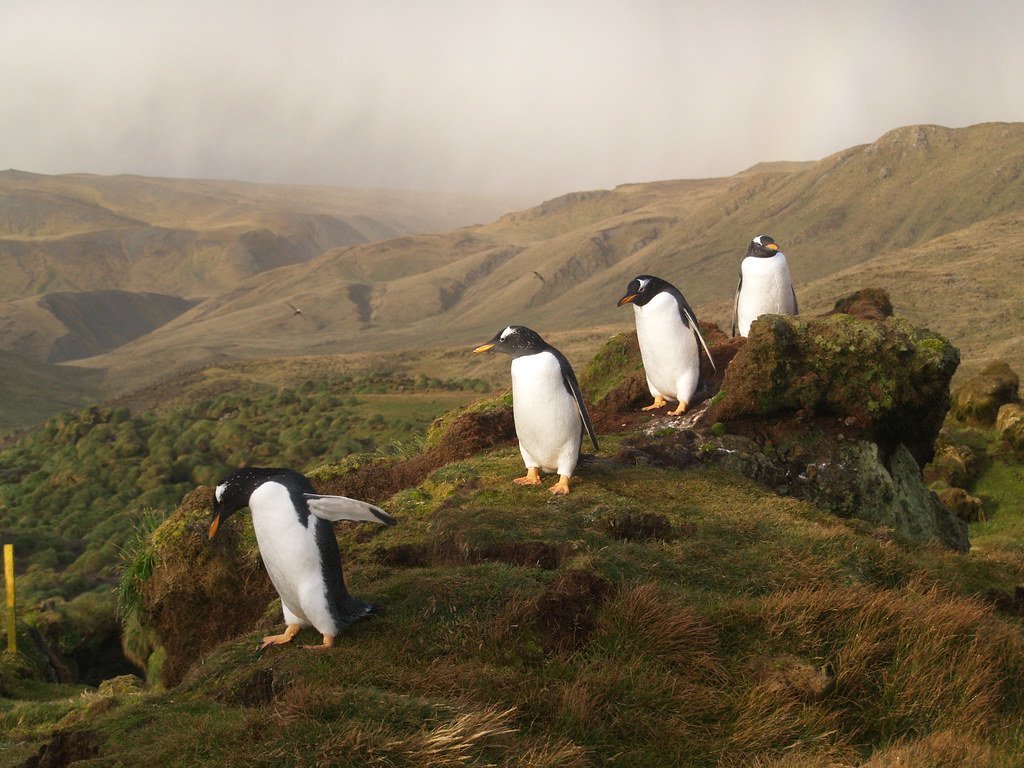 Macquarie is a small windswept island lying between New Zealand and Antarctica, a UNESCO World Heritage Site since 1997. The island is unique in two ways. Firstly, it is the only place on Earth where rocks from the planet’s mantle are actively exposed at sea level. Secondly, it is a hub of diverse flora and fauna, including various species of penguins, seals, petrels, albatrosses, grasses, and lichens. Add the island’s wildly beautiful landscapes to the picture, and you’ll get a fascinating holiday destination. Isn’t it exciting to go somewhere so remote and hard to reach?

People have been searching for the legendary Atlantis that submerged in the ocean 9,000 years ago for almost two millennia. Scholars name up to 50 locations where it could be found. You won’t find any information on this fabled land in your guidebooks, but as soon as we find out where it is, we won’t fail to tell you!