THE
AFRICAN LEADERSHIP CHALLENGE AND THE MANDELA EXAMPLE 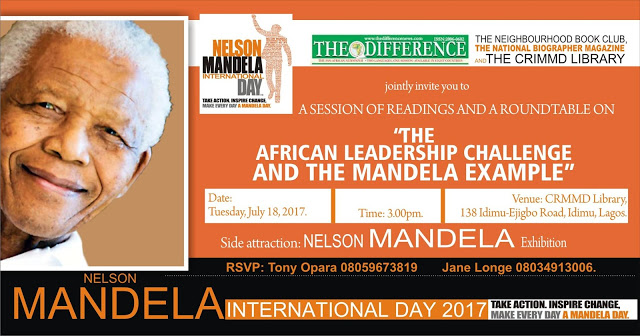 Tuesday 18th July,
2017 would mark the 99th post-humus birthday of Former South African President
– Nelson Mandela. Since 2009, Nelson Mendela International day is an annual
international day in honor of the Late Madiba, celebrated each year on 18 July
– his birthday. The day was officially declared by the United Nations in
November 2009, with the first United Nations Mandela Day held on 18 July 2010.
Mandela Day is not meant as a public holiday, but as a day to honor the legacy
of Nelson Mandela and his values, through volunteering and community service.
The Mandela Day is a global call to action that celebrates the idea that each
individual has the power to transform the world, the ability to make an impact.
On Tuesday, the same
day the Madiba would have been 99 years old if he was alive, a session of
readings and roundtable discussion on the legacies of the late political
activist cum politician would be held at the CRMMD Library, 138, Idimu-Egbe
Road, Idimu, Lagos and I would be delivering the keynote address at the
historic event, I would also be among the panel of discussants at the
roundtable. This week’s article is themed according to the event and it would
give us an overview of the life and times of the late Madiba and also offers
relatable examples to the present league of African leaders.

A
Brief Biography of Nelson Mandela
Rolihlahla Mandela was
born into the Madiba clan in Mvezo, Transkei, on 18 July 1918. His mother was
Nonqaphi Nosekeni and his father, Nkosi Mphakanyiswa Gadla Mandela, was the
main advisor to the Acting King of the Thembu people, Jongintaba Dalindyebo. He
received the name “Nelson” on his first day in primary school from
his teacher Miss Mdingane. When he was 12 his father died and he was raised by
the Regent at the Great Place in Mqhekezweni. He was sent to the best schools
available and began studying a BA at Fort Hare University. When he was expelled
for joining a student protest, the Regent told him to return or get married. So
he ran away to Johannesburg with his cousin Justice. His first job in 1941 was
as a security guard on a gold mine and then as a legal clerk in the law firm
Witkin, Edelman and Sidelsky. At the same time, he completed his BA through
Unisa.
In 1943 he enrolled
for an LLB at Wits University. He was a poor student and became more involved
in politics from 1944 after he helped to start the ANC Youth League. He married
in the same year and needed money to support his family. By mid-1952 when the
university asked him to pay the 27 pounds he owed or leave, he already had
three children. He only started studying again in 1962 in prison. He finally
graduated with an LLB through Unisa 27 years later. Later in 1952 he became the
National Volunteer-in-Chief of the Defiance Campaign against apartheid laws. He
and 19 others were later charged and sentenced to nine months, suspended for
two years. In August he and Oliver Tambo started South Africa’s first black law
firm, Mandela & Tambo.

In those days one
could practice as an attorney with a two-year diploma. Later that year he was
banned for the first time – he had to ask the government for permission
whenever he needed to leave Johannesburg. After the adoption of the Freedom
Charter in 1955, 156 people were arrested and charged with treason. The trial
lasted four-and-a-half years until 29 March 1961 by which time all were
acquitted. The ANC and PAC were banned after the 21 March 1961 killing by
police of 69 unarmed protesters in Sharpeville. Mandela called on the
government not to turn South Africa into a republic on 31 May 1961 but to
discuss a non-racial constitution. He was ignored so he called for a strike on
29, 30 and 31 March. In June 1961 he was asked to lead the ANC’s armed wing,
Umkhonto weSizwe and it launched on 16 December that year. On 11 January 1962,
Mandela secretly left South Africa to undergo military training and to get
support from African countries for the armed struggle. He was arrested on 5
August and charged with leaving the country illegally and encouraging the
strike. He was convicted and sentenced on 7 November 1962 to five years in
prison. On 11 July 1963, a secret hideout he once used was raided by police. On
9 October 1963 he joined 10 others on trial for sabotage in the Rivonia Trial. 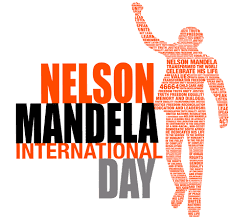 On 12 June 1964 he and
seven others were sentenced to life imprisonment. While he was in prison his
mother and his eldest son died. He was not allowed to attend their funerals. He
spent 18 years on Robben Island, and while at Pollsmoor Prison in Cape Town in
1985 he had to go to hospital. When Justice Minister Kobie Coetsee visited him,
he had an idea: to see if the government wanted to talk about one-day meeting
with the ANC. In 1988 he was taken to hospital for tuberculosis. Three months
later he was moved to Victor Verster Prison where he spent his last 14 months
in prison. He was released on Sunday 11 February 1990, nine days after the
unbanning of the ANC and the PAC. Other political prisoners were freed and
exiles returned. The ANC began talking to the government about South Africa’s
future. For this work he and President FW de Klerk won the Nobel Peace Prize in
1993, and on 27 April 1994, Mandela voted in South Africa’s first democratic
elections. On 10 May 1994, he was inaugurated as South Africa’s first
democratically elected President and stepped down after one term. In his
retirement he worked on building schools and clinics, highlighting HIV,
children and leadership. He died at his home in Johannesburg on 5th
December 2013. (Source: Learners’ Biography)

The subsequent
paragraphs would be dedicated to discussing the lessons and legacies, the life
of the first black president South Africa ever had can teach the current league
of African leaders.

v Peaceful Resolution of Crisis
– Nelson Mendela was awarded the Nobel Peace Prize in Norway sometimes in July,
1993 for his peaceful resolution of the country’s crisis. Gracious but steely,
Mandela steered a country in turmoil toward a negotiated settlement: a country
that days before its first democratic election remained violent, riven by
divisive views and personalities. He endorsed national reconciliation, an idea
he did not merely foster in the abstract, but performed with panache and
conviction in reaching out to former adversaries. African leaders need to learn
that peaceful resolution of crisis would go a long way to safe their countries
from Humanitarian and economic crisis. The Arab spring illustrates my
assertion.

v Tenure Elongation
– Although the 1996 constitution allowed the president to serve two consecutive
five-year terms, Mandela had never planned to stand for a second term in
office. He gave his farewell speech to Parliament on 29 March 1999 when it
adjourned prior to the 1999 general elections, after which he retired. Although
opinion polls in South Africa showed wavering support for both the ANC and the
government, Mandela himself remained highly popular, with 80% of South Africans
polled in 1999 expressing satisfaction with his performance as president.
Nelson Mendela’s legacy of leaving the presidential position when the ovation
was loudest endeared him to many, myself included. He could have continued his
second term and like most African leaders, made efforts to be President for
life but he did not.

v Philanthropy
– After actively retiring from politics, The Madiba started working with the
Nelson Mandela Foundation, founded in 1999 to focus on rural development,
school construction, and combating HIV/AIDS. This is another learning point for
our leaders. 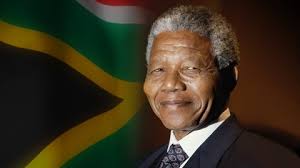 Conclusively, when I
was told about my responsibilities at the pioneering Nelson Mandela Round-table
in Nigeria, I was extremely humbled. It means a lot to be called upon to
deliver the keynote address in an event in honor of the late Madiba because it
means someone somewhere believes I have everything it takes to be the next
Nelson Mandela.
#LETSDOITFORTHEMADIBA. 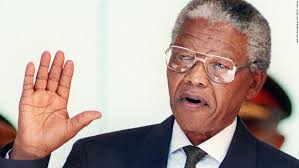 God bless us all