How does sex affect your brain? 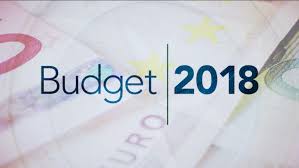 Last year, January
27th, I posted an article on the 2017 budget on my blog, the budget was tagged
“The BUDGET OF ECONOMIC GROWTH AND RECOVERY“. In the article, titled;
“2017 APPROPRIATION BILL: THE BUDGET OF ECONOMIC GROWTH AND RECOVERY?”,
I regretted that the appropriation bill cum budget which was signed into law on
June 14th, 2017 by the then Acting President – Prof. Yemi Osinbajo is not
enough to get us out of recession. The article provided a transparent analysis
of the budget and explained in layman terms how those budgetary allocations
will affect every one of us. To read the full length of the article, please click here.
Moving swiftly on, we
should all thank God that the country is out of economic recession but this does
not mean I was wrong. Please note that the country was out of recession before
the budget was passed into law and my predictions were based on expert calculations
and extensive evaluation of the figures and allocations in alignment with the
needs of the Nigerian economy at that point in time.
However, we need to
acknowledge the present administration’s efforts. The Federal Government headed
by President Muhammadu Buhari needs to be celebrated on the significant
progress recorded in the previous calendar year and they are highlighted in the
table below;
Other notable
achievements are;
v  Over
766km of roads were constructed / rehabilitated across the country.
v  By
2nd Quarter, 2017, exports significantly outpaced imports.
v  Over
33,000 hectares of irrigation projects have been completed.
v  On
ease of doing business, Nigeria moved 24 places from 169th position in 2015 to
145th position in 2017.
Most importantly,
please be reminded that the essence of this educating and informative piece is
to discuss the nitty gritty of the 2018 appropriation bill and explain with
relatable examples how those budgetary allocations and figures are going to affect
every citizen and resident of this great country. That being said, I would
encourage every one of us to take time off our busy and hectic schedules to
read and familiarize ourselves with the budget. To download a PDF format,
please click here.
On Monday, November
6th, 2017, President Muhammadu Buhari addressed a joint session of the National
Assembly at the National Assembly Complex, Abuja, where he proposed a total
expenditure of NGN8.6 trillion for the 2018 budget, representing an increase of
16% from the 2017 budget estimate. 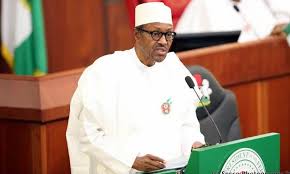 Hear him; ‘The 2018 Budget Proposals are for a Budget
of Consolidation. Our principal objective will be to reinforce and build on our
recent accomplishments. Specifically, we will sustain the reflationary policies
of our past two budgets. In this regard, the key parameters and assumptions for
the 2018 Budget are as set out in the 2018-2020 Medium Term Expenditure
Framework (MTEF) and Fiscal Strategy Paper (FSP). These include:

I.
Benchmark
oil price benchmark of US$45 per barrel;
II.
Oil
production estimate of 2.3 million barrels per day, including condensates;
III.
Exchange
rate of N305/US$ for 2018;
IV.
Real
GDP growth of 3.5%; and
V.
Inflation
Rate of 12.4%.
Based
on the above fiscal assumptions and parameters, total federally-collectible
revenue is estimated at NGN11.983trillion in 2018. Thus, the three tiers of
Government shall receive about 12% more revenues in 2018 than the 2017
estimate. Of the amount, the sum of NGN6.387trillion is expected to be realized
from oil and gas sources. Total receipts from the non-oil sector are projected
at NGN5.597trillion.” (Source: SaharaReporters, New York,
USA. November 7th, 2017) 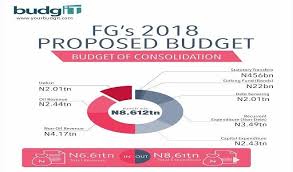 An
Analysis of the Budget Allocations and Projections
Ø  Capital Expenditure
– It might interest you to know that NGN2.428trillion is budgeted for capital
expenditure in the 2018 budget which represents 28% of the NGN8.6trillion
budget. It might also interest you to know that there is a 2% decrease from the
2017 budget which was pegged at 30%.
My
comment – The Federal Government was desperate to get the Nigerian economy out
of recession and this is evidenced in the 30% budgetary allocation in the
previous budget estimate. A reduction is understandable because of the negative
effect it might have on inflation. However, we should also remember that the
targeted GDP growth for the present year is 3.5% and government’s spending on
infrastructure would go a long way to achieve this feat. I would have preferred
that capital expenditure is pegged at 30% or higher because of the huge
infrastructure gap in the country.
Ø  Non-Debt Recurrent Expenditure
– The highest single allocation was budgeted for Non-debt recurrent expenditure
at 41%, It is an increase of 2% from 39% budgeted in the previous budget. The
figure is NGN3.494trillion.
My
comment – We need to significantly reduce the cost of governance, we need to
check the loopholes in our constitution and ensure that all avenues to cut cost
and block leakages are exploited. The time for action is right now.
Ø  Debt Servicing & Deficit
Borrowing – 23% of the total budget goes to Debt
servicing which means that NGN2.014trillion of the total budget estimate would
be used to service debt and other financial obligations. Others are Sinking
Fund and Statutory transfers which are NGN0.22trillion and N0.456trillion
respectively. Together, they make up 8% of the total budgetary allocations for
2018.
My
comment – An increase of 0.5% from the previous budgetary allocation of 22.5%
in the previous year is quite understandable. The federal government sourced
for finance internally and externally in the previous year. Instances abound;
Sale of USD1.5billion Euro-Bond, USD300million Diaspora Bond, FGN Savings Bond,
NGN100billion Debt Sukuk among others. 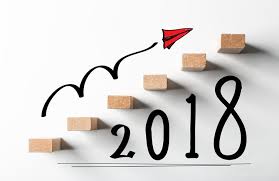 Conclusively, I am
optimistic that the 2018 budget will stir the country to greater heights and
commendable progress. I would also like to use the opportunity to appeal to the
members of the National Assembly, the Executive and other stakeholders to ensure
that no stone is left upturned in the speedy passage of the 2018 budget of
consolidation.
God Bless Nigeria,
God Bless Us All
Olusanya,
Oluwole Sheriff