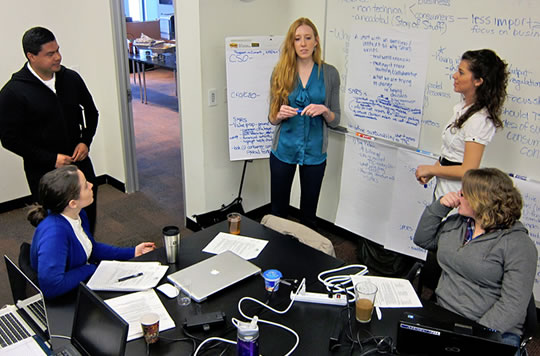 The subtle signals that—thank the heavens—decisions are being made and how long the wrap-up will last.


Until now people have been gathering around tables and whiteboards without properly understanding what is going on in ‘The Meeting’.

Perhaps that’s why so many of them feel like a complete waste of time. As ‘The Meeting’ stretches out, participants start to feel lost, adrift, confused and unsure of the point.


But now, thanks to an analysis of 95 meetings by researchers at MIT, we understand this strange beast a little better (Kim & Rudin, 2013).

‘The Meeting’, it seems, sends out little clues about what stage it’s at through the language of those at ‘The Meeting’.


Although it sounds incredible, by close textual analysis of the words being used, you can tell when a decision is being made.


Usually, of course, decisions are avoided at all costs in ‘The Meeting’ in case anyone has to actually do anything as a result of ‘The Meeting’.


But if you listen carefully enough, you can hear the almost imperceptible signal that agreement is being reached. That signal, according to the MIT researchers, is when people start asking each other for specific information:


The question is, then, how can you persuade other people to reach one of these mythical ‘decisions’ which we hear so much about, yet which are so elusive in ‘The Meeting’?

The researchers argue that top of the potential list comes the word ‘yeah’. Apparently when people start their utterances with ‘yeah’, this is a particularly good signal that ‘The Meeting’ is creeping ever-so-slowly towards this so-called ‘decision’.


OK, it’s a miracle and ‘the meeting’ has made its ‘decision’, now, how long ’till I can get out of here? Not so fast, now we’ve got the wrap-up.


The MIT researchers found that how long the wrap-up lasts depends on how long it’s taken to reach a decision. Once ‘The Meeting’ was over 14 minutes, the longer it was, the shorter the wrap-up. After the decision was made, people in ‘The Meeting’, if it was 14 minutes long, took 18 further minutes to wrap-up.


But, if ‘The Meeting’ went to 35 minutes, the wrap-up normally only lasted about 10 minutes.


Why not conduct your own experiments in meeting science? All you need is a boring meeting to go to and a keen eye for details:

Please send your results to MIT, not me.