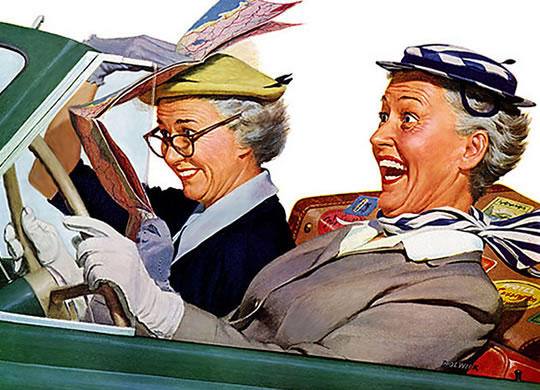 What a simple cognitive bias teaches about how to live our lives.
Here’s a common experience for motorists: you are driving somewhere new and you’re late.

As you drive down unfamiliar roads it seems that everything is conspiring against you: other cars, the road-layout, the traffic lights and even suicidal cyclists. You know it’s only a few more miles, but it seems to be taking for-e-e-e-e-e-ever.


Psychologically there are all sorts of things going on to make the journey seem longer than it really is, but let’s just isolate one of those: the unfamiliarity of the route.

Unknown routes peak our curiosity; they are filled with new names, landscapes and landmarks, all of which attract the interest. The fact that our attention is engaged with all this newness has a subtle effect on how much time we think has passed.


To see why, let’s take the opposite perspective for a moment.


Think about driving a route that’s very familiar. It could be your commute to work, a trip into town or the way home. Whichever it is, you know every twist and turn like the back of your hand. On these sorts of trips it’s easy to zone out from the actual driving and pay little attention to the passing scenery. The consequence is that you perceive that the trip has taken less time than it actually has.


This is the well-travelled road effect: people tend to underestimate the time it takes to travel a familiar route. The corollary is that unfamiliar routes seem to take longer.


The effect is caused by the way we allocate our attention. When we travel down a well-known route, because we don’t have to concentrate much, time seems to flow more quickly. And afterwards, when we come to think back on it, we can’t remember the journey well because we didn’t pay much attention to it. So we assume it was proportionately shorter.

The well-travelled road effect has an odd consequence. When you estimate how long it takes to travel a familiar route, typically you’ll underestimate it. Because of its familiarity the travelling time feels shorter than it really is. This means that when you travel a familiar route, unless you adjust for this effect, you’re more likely to be late.


Actually the well-travelled road effect is a specific example of the fact that we tend to underestimate how long routine activities take. Or, put the other way around: time seems to fly when we’re engaged in automatic, routine tasks.


This means that people often find the last part of their holiday tends to go quicker than the first part (Avni-Babad & Ritov, 2003). That’s because as the holiday goes on, we settle into a routine, so time seems to go quicker towards the end.


The same happens at work, where people report routine activities as taking proportionately less time than those that require more deliberate, conscious attention.


Familiarity, then, with routes travelled, holidays and work activities, tends to speed up our perception of time.


Maybe this all helps explain why the latter parts of our lives–which are more likely to be filled with routine, predictable events–seem to skip by much quicker than our earlier years. As the roads of our lives become well-worn we take less notice of the landscape.


One way to avoid this is to expose yourself to more unexpected, unpredictable experiences…

…but probably not being late and getting stuck in traffic.