This is David Kotei a.k.a D. K.
“Poison”
Ghana’s First-Ever World Champion
Among All Sports Disciplines. 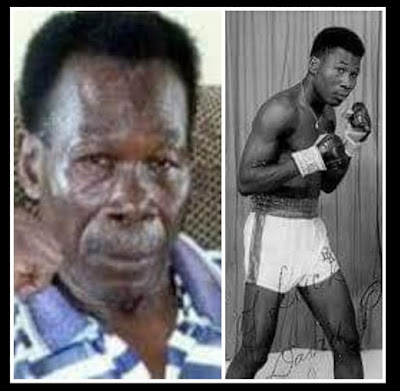 After
winning his world title fight against Ruben Olivares in 1975, which he later
defended the title the following year. According to reports and Kotei’s own
story, in 1976, he loaned an amount of 45,000 dollars to the Government of
Ghana, then led by Ignatius Kutu Acheampong. The money was intended for the
purchase of canned mackerel to mitigate the harsh economic and food conditions
the country was facing. The loan had been facilitated by his management, which
was led by Col. John Slater. According to him (Kotei), the money was part of
his reward for defending his title against Japan’s Fuku Yama in 1976.
The
loan has not been paid back to date because shortly after the canned mackerels
arrived in the country, the Acheampong’s regime was overthrown by General
Akuffo in a military palace coup. In September 2019, the president of Ghana,
Nana Akufo Addo noted that he would look into the issue. This was at a meeting
with a delegation of former world boxing champions from Ghana.
It’s
been 41 years now and no government has attempted to refund his money
irrespective of his numerous appeals and petitions to successive governments.
He is currently lying sick the at hospital still waiting for his $45,000. He
cries anytime he speaks about this situation.

Adeshile
Adekolajo is a graduate from the University of Abuja, He works for Ntel
Nigeria and he owns – Mccollybright.blogspot.com

He
is a writer, blogger, and poet, to read more of his interesting and
educative articles, please log on to – mccollybright.blogspot.com.ng.