THE CHALLENGES OF THE AFRICAN CHILD: NIGERIA AS A CASE STUDY

Between The Debt Burden and Huge Infrastructural Gap in Nigeria: My Opinion

“And of course, what is key is what countries, such as Nigeria are doing with those borrowed funds. Undertaking structural reforms to develop economy is key,”- Tobias Adrian, Financial Counselor and Director, Monetary and Capital Markets Department at the IMF. (October 17th, 2019)

At the twilight of the 2019 General Elections, the Vice Presidential candidate of the main opposition party PDP and a former Governor of Anambra State Dr. Peter Obi noted that the present administration headed by President Muhammadu Buhari has plunged Nigeria into USD80Billion public debt in three years. This accusation generated a lot of controversy but an extensive explanation of the public debt figures by AfricaCheck adequately addresses the accusation. Please click here to read the full article.
More recently, the Federal Government plans to borrow an additional NGN1.594trillion from a combination of the domestic and foreign sources to meet up the income shortfall needed to fund the 2020 budget the President signed into law sometime last week and the Nigerian populace reacted to this development in a frosty and hostile manner.
The main reason for the disagreement is because of the appetite for public debt in which the present administration seems to thrive in the face of skyrocketing debt servicing budgetary allocation which currently stands at 20.37% of the total expenditure. Since the inauguration of President Buhari on the 29th of May, 2015, the public debt profile has continued to rise.
In the budget defense section held on the 14th October, 2019, The Honorable Minster for Finance and National Planning Mrs. Zainab Ahmed explained in great details, the reason for debt sourcing in the midst of instantaneous need for economic diversification, slow projected GDP growth rate in sub-Saharan Africa and a less than 1% global GDP growth rate in 2020. The Honorable Minister told the joint section of the National Assembly that the Budget deficit will be financed mainly by borrowing NGN1.594 trillion. • Domestic sources NGN744.99 billion • Foreign sources NGN850 billion. 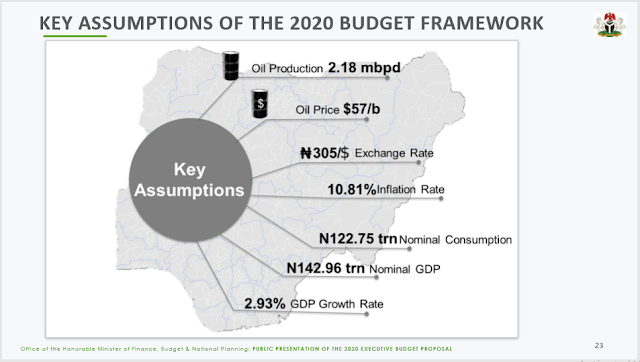 In a Punch editorial titled: ‘High cost of debt servicing’ published on the June 24th, 2019. The fiscal irresponsibility and financial misappropriation of successive administrations that led to this need to source for borrowing to fix critical infrastructure in the first place and the need to immediately curb borrowing to fund the budget were discussed in extensive details. Excerpts, ‘The Buhari government should halt this dangerous drift, with its inclination to continue borrowing, especially from China, to complete railway projects and other infrastructure that ought to have been mostly executed with private funds through foreign direct investment and privatization.
The DMO has confirmed that the government will borrow USD2.7 billion from external sources to fund the 2019 budget. The future of the country should not be mortgaged further. This was how Nigeria slowly, but surely, fell into the foreign debt-trap with an overhang of USD30 billion in 2005. But the country exited it following a debt relief of USD18 billion from the Paris Club of creditors, which paved the way for it to pay USD12 billion in 2006, climaxing the debt forgiveness under Olusegun Obasanjo’s Presidency.’
In the concluding part of the article, creative alternatives to public borrowing were also given. ‘Though, the Buhari administration has justified its borrowings with his predecessor’s failure to save when oil prices averaged USD100 per barrel for almost five years, options exist in looking inwards, tightening revenue leakages, and bringing more people into the tax net. Nigeria is one of the countries where some billionaires completely evade tax payment. An insight: 6,772 billionaires with between NGN1 billion and NGN5 billion in their bank accounts evaded tax in 2016; yet, they are still walking free.’
My Opinion: Nigeria’s population is expected to double in the next 30 years – 400million people – making us the third most populous country in the world only after China and India. Adding another 200million people in a period of 30 years without providing the adequate infrastructural needs and the right atmosphere for the future generations to flourish is a major failure in leadership and governance.
While, it is widely believed that Nigeria requires USD15billion worth of investments annually for 15 years in order to adequately develop its infrastructure nationwide, Nigeria only spends a meagre NGN5.9Billion per year on federal infrastructure, equivalent to about 5% of the GDP.
In my opinion, borrowing to fund critical infrastructural deficit (if it is the last resort) is a welcomed development provided they are judiciously utilized and prudently sourced.
God Bless Us All.
God Bless Nigeria.