7 Ways to Dress for Transitional Weather

An American staple that’s heading back to its roots 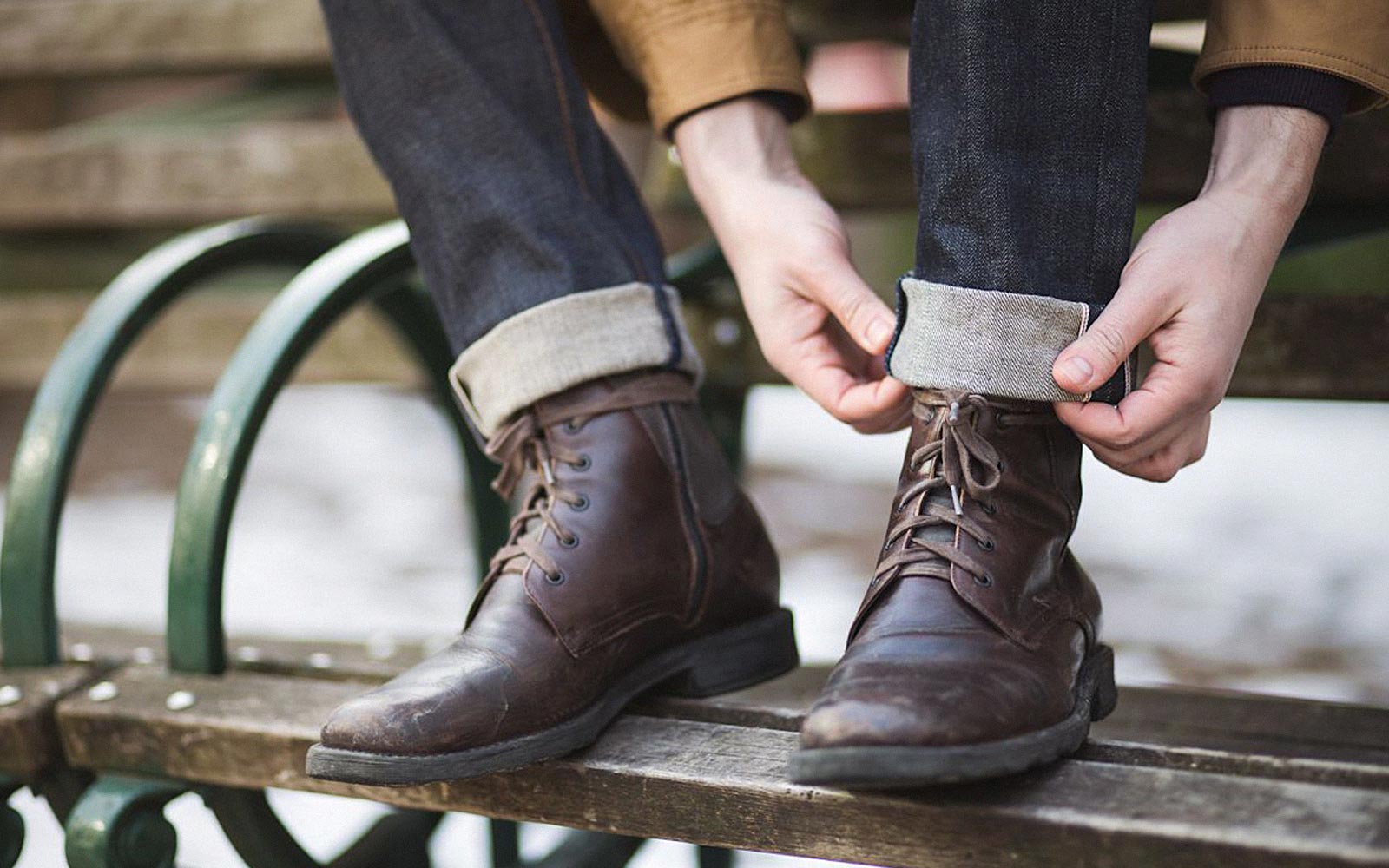 “Heritage” fashion and the resurgence of “ruggedness” in menswear has become a highly sought-after selling point for brands in recent years. The term heritage implies a sense of tradition or inheritance, and for a fashion brand, it often means the maintaining or revival of old-school traditions in the design and manufacturing process. In terms of jeans, two of the biggest revivals of old-school traditions in menswear, besides tailored suits, are selvedge and raw denim. Here’s everything you need to know. 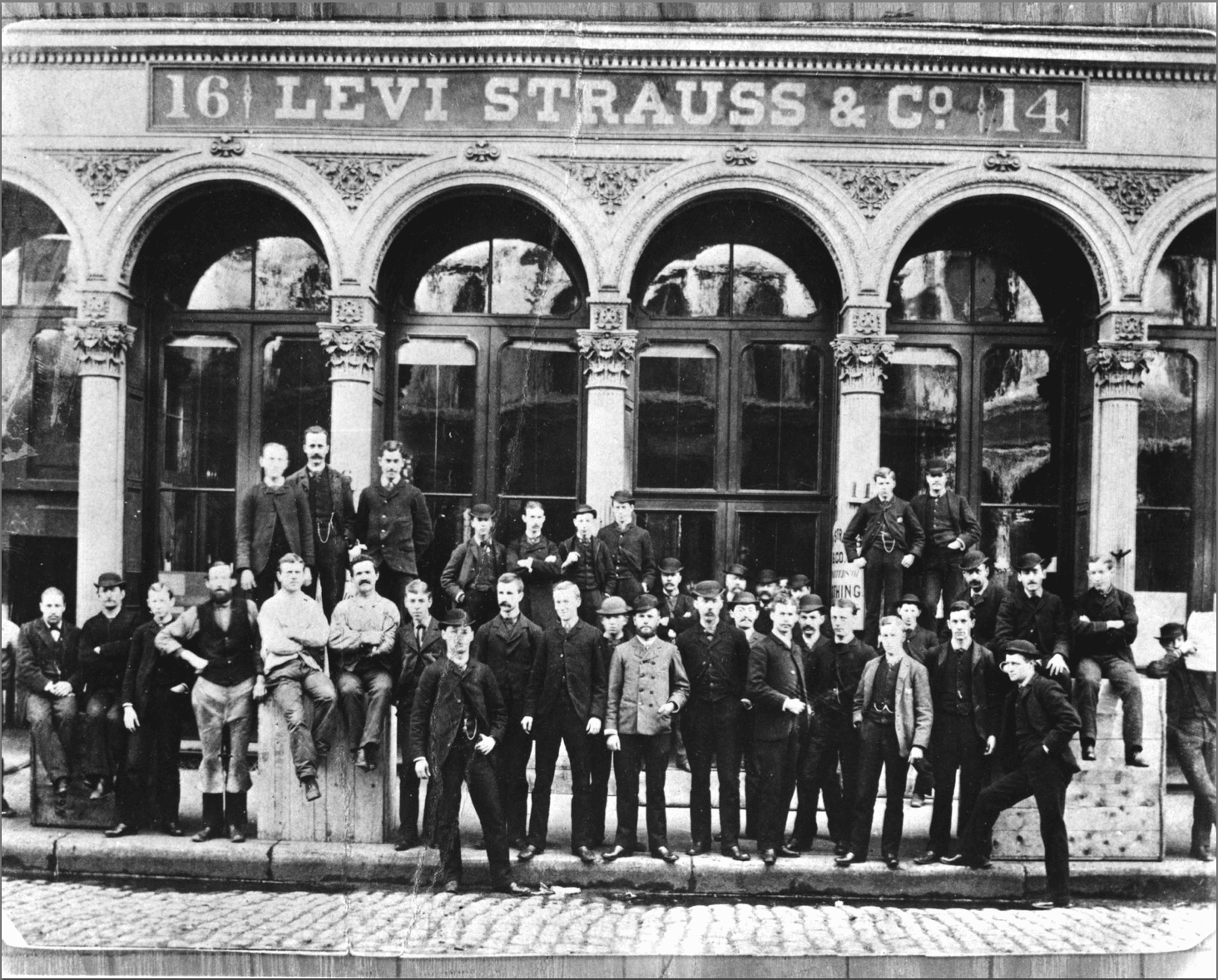 Denim has been around since the 19th century and is arguably one of the most American textiles on the market to this day. Blue jeans, in particular, were invented in 1873 by Levi Strauss, and quickly became a workwear staple in American (and European) history thanks to its durability. In early years, most denim jeans were made from raw and selvedge denim that was produced in the US. As denim grew in popularity, it began transitioning out of being used exclusively for hard labor, and slowly started to saturate everyday style and trends. By the 1950’s, denim was in such high demand that the way it was manufactured was influenced dramatically. Brands and manufacturers rushed to cut costs and outsourced labor in order to keep up with demand, which greatly affected the quality of the affordable blue jeans we know today. As the decades wore on, other demands and trends surrounding denim–such as pre-washed, pre-ripped, and pre-faded jeans–further affected the speed with which denim needed to be produced. For a while, raw and selvedge manufacturing took a back seat to low quality, affordable, fast fashion denim.

In the early 2000’s, a resurgence in demand for heritage brands and American-made labels breathed new life into raw and selvedge denim. Suddenly, ‘grandpa’s jeans’ were cool again, and everyone wanted once more to get their hands on quality denim that was built to last a lifetime. Today, more brands than ever are popping up with this kind of old-school mentality in mind, and brands that have been around forever are starting to take note, too. If you’re thinking of investing in well-made, high-quality denim, you should first understand what exactly raw and selvedge mean (because they’re not the same!).

What is Raw Denim? 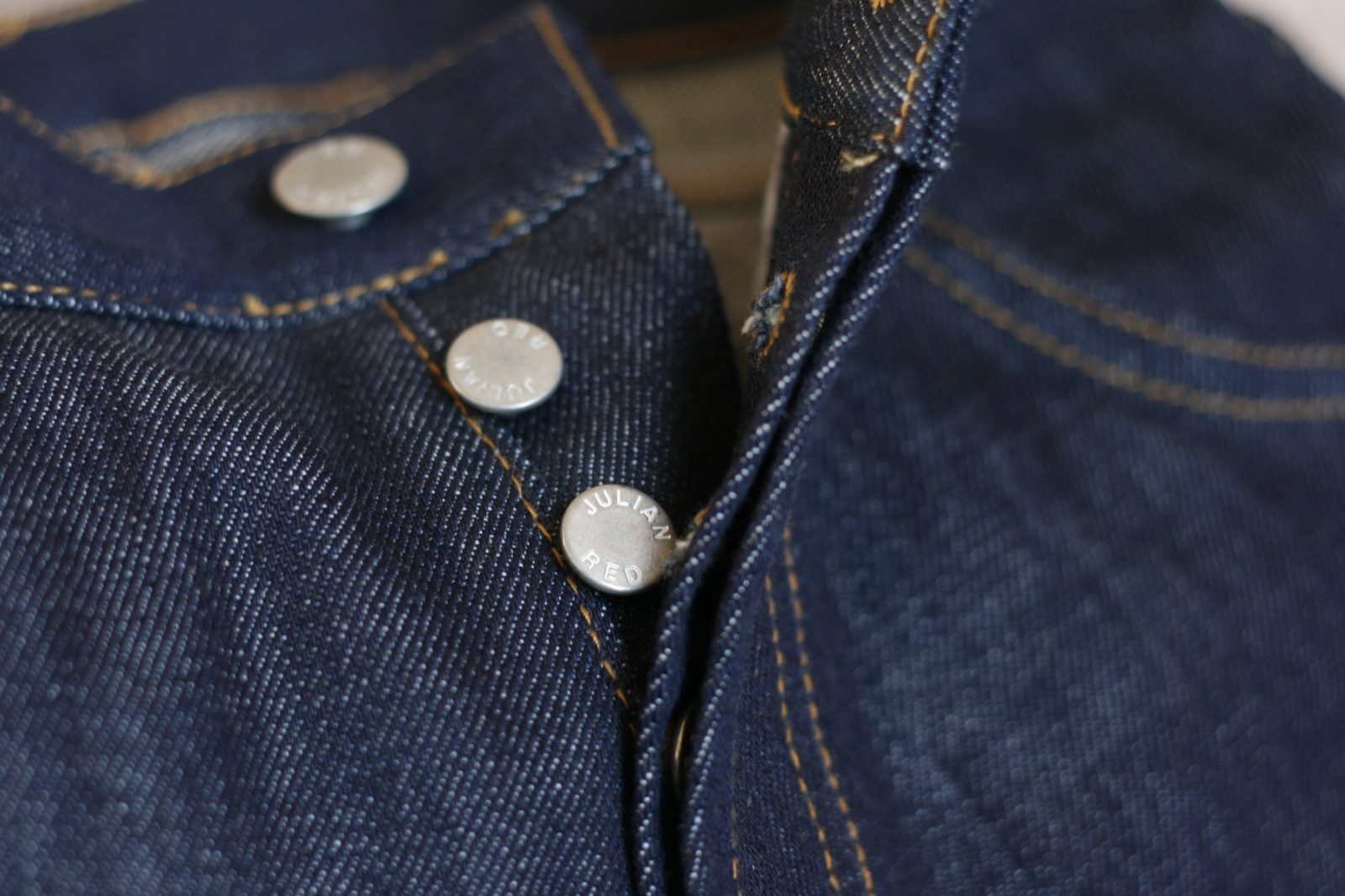 Raw denim is denim in its purest, most unmodified state. This kind of denim (also known as ‘dry denim’) is simply denim that has not been altered, washed, or chemically treated after the jeans have been sewn and dyed. Once a pair of regular jeans has been made, they’ll usually be washed or chemically processed to get softened or pre-faded. Raw denim forgoes all excess treatment and instead sports a pure, unaltered indigo dyed color and all the weight of true denim at its finest. Because the fabric isn’t pre-softened, raw denim jeans are extremely stiff and dark blue at first. A few weeks of regular wear should break in and fade a pair of raw denim jeans substantially, but it can be shocking to wear them for the first time if you’re not privy. As you wear your raw jeans more and more, you’ll be able to add your own personal touch on them as they wear and fade based on your lifestyle, the way you walk, and how your jeans get utilized. No artificial fading, rips, or coloration here.

What is Selvedge Denim? 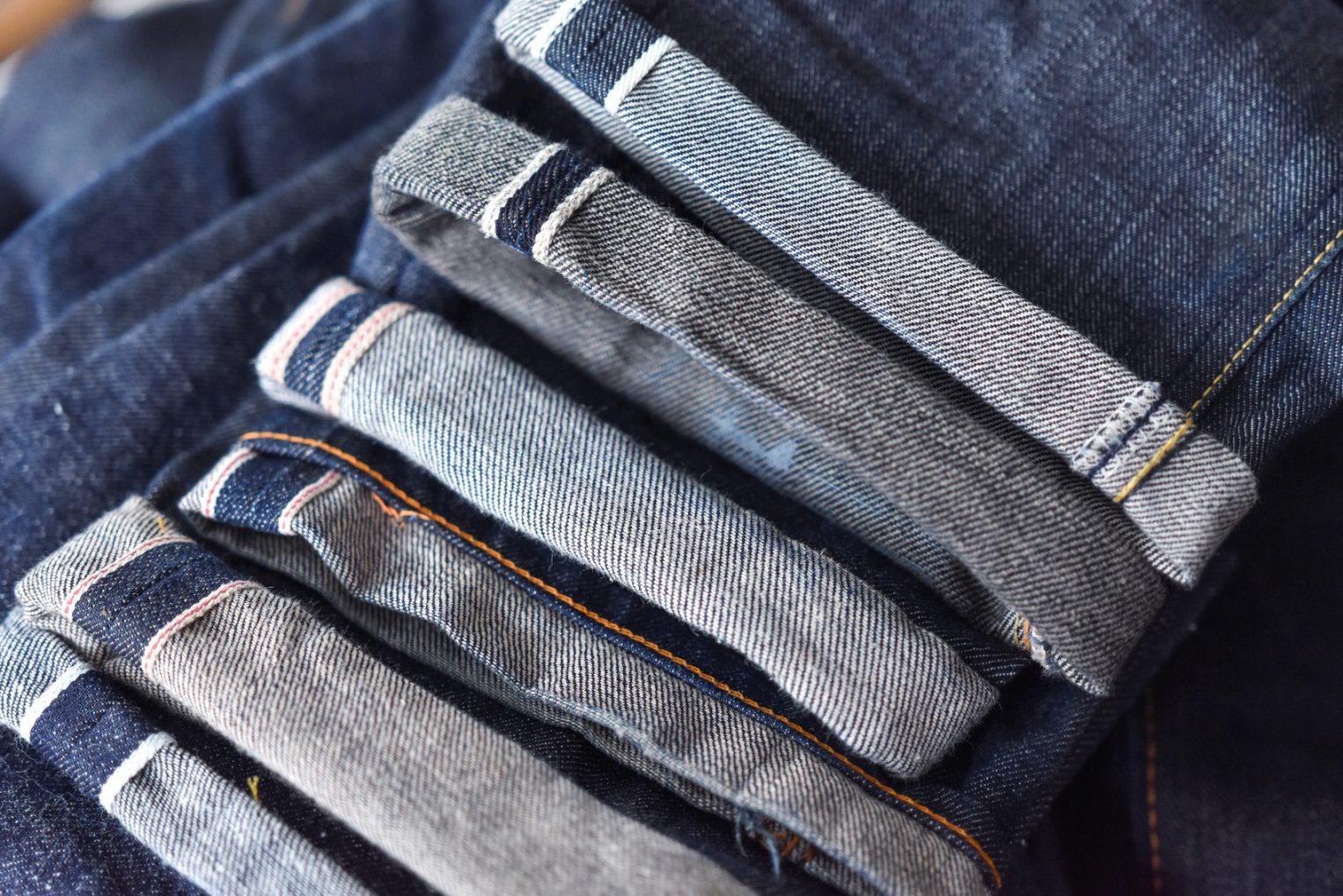 A lot of people think raw and selvedge are interchangeable terms, but that’s not true at all. While raw refers to denim that hasn’t been treated, selvedge refers to the edges of fabric produced on an old-school shuttle loom, which is what wove denim jeans together in the early 20th century, up until denim became fast fashion. It’s definitely true that most selvedge jeans are made with raw denim, but you can also easily find selvedge jeans that have been treated or raw denim that’s not selvedge. They’re not necessarily one in the same.

Now, back to selvedge. Shuttle looms produce tightly woven strips of ultra heavy fabric, and the looms were capable of finishing these strips off with tightly woven bands that are designed to prevent fraying or unravelling. Since the edges of denim made on shuttle looms come out already finished, this kind of denim is referred to as having a “self-edge.” As time wore on, the derivative term “selvedge” was born.

As the demand for denim increased, one of the first processes to be cut and replaced was the use of shuttle looms. Projectile looms created wider strips of fabric and took on much more fabric at a fraction of the cost, with the key difference being that the edges of denim produced on projectile looms aren’t pre-finished. Projectile loom-made denim, while more susceptible to fraying, is more affordable overall. Most denim that’s available today is non-selvedge for this very reason. 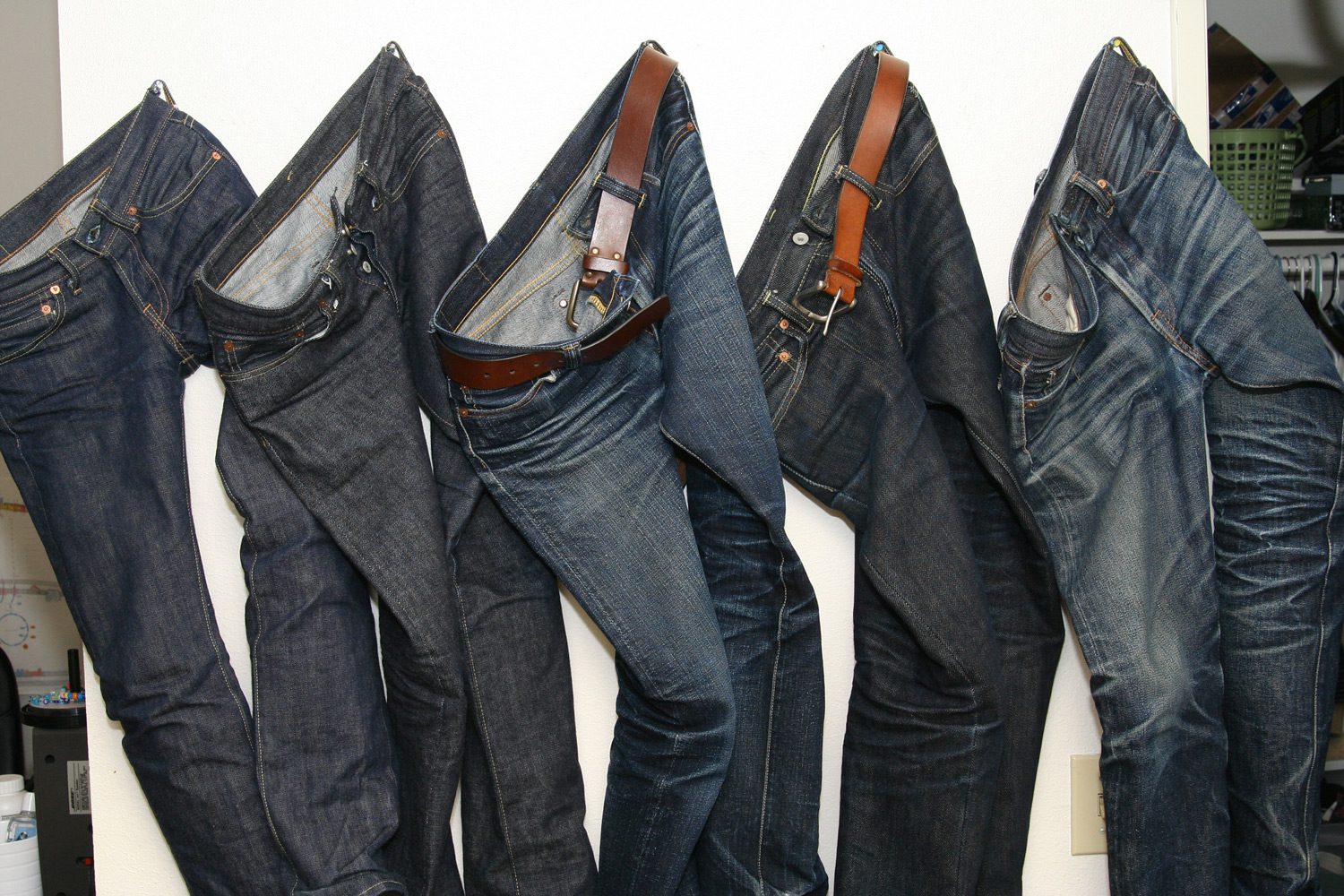 While projectile loom denim and denim that’s been pre-treated aren’t necessarily lower in quality, there’s something to be said about the attention to detail and heritage-ness that comes with raw and selvedge jeans. In recent years, both styles of denim are seeing a revival as men become more and more reinvested in quality clothing. If you’re considering taking the plunge, know that raw and selvedge denim is durable and made for the long haul. The selvedge edge and the weight of raw denim mean that jeans made in this manner won’t easily fray, wear down, or rip. They’re a true value. What’s more, investing in a pair of raw or selvedge denim usually means that you’re also investing in an American-made product. However, always be sure to check the label, as some companies still outsource their production to sweatshops. 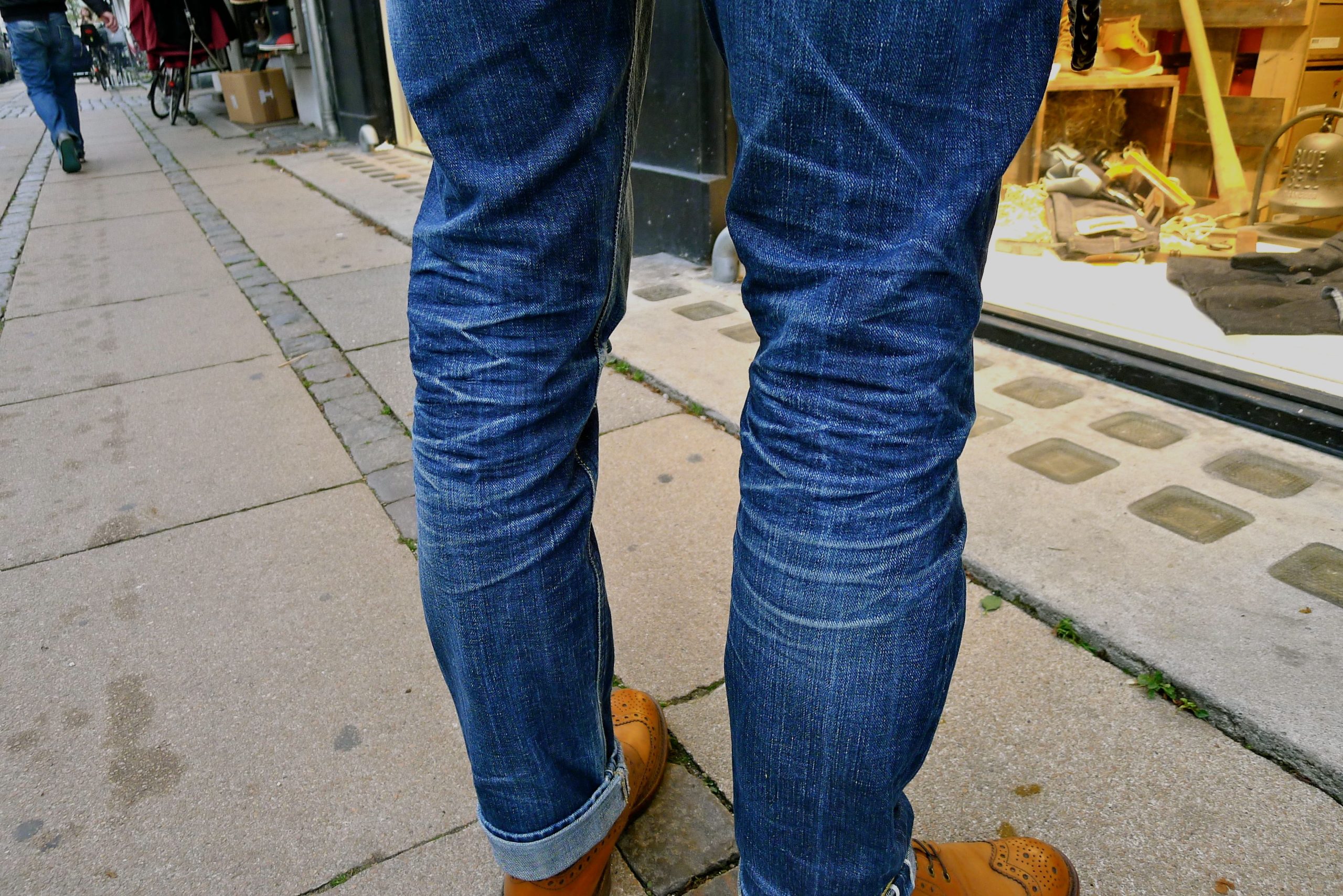 Of course, there are definitely some things to keep in mind when you’re looking to invest. Namely, it is an investment. Upfront costs of a pair of selvedge and/or raw denim are usually steep, running you anywhere from $50 (usually selvedge/raw denim made outside of the US) to $300+. You can find a good made-in-the-USA pair for anywhere from $90 – $200, typically. Another consideration is that raw denim will not be as comfortable as the jeans you’re probably used to. At least, not right away. Investing in a pair of these jeans is also an investment in time, as it’ll take a few weeks before they start feeling lived in.

It should also be said that sizing for heritage denim is a bit trickier too, and your best bet is going to be trying on a pair in person in a store. While you might be used to your size 32” pants, selvedge/raw denim doesn’t use vanity sizing. This issue is two-fold, too. It’s definitely recommended to try on a pair in-store, but most heritage denim is only available online (since the revival is still somewhat new). If you live in a big, trendy city, you should be able to find some brick and mortar shops that are in on the movement. However, if you don’t, your best bet will be to buy a few pairs online from a store with a good return policy, find the pair that works the best for you, and return the others. Additionally, know that there is a difference between sanforized and unsanforized raw denim. Unsanforized raw denim hasn’t been treated for shrinkage and may shrink up to 5-10% after its first wash. So, if you want a pair of unsanforized jeans, definitely size up accordingly. Many raw and selvedge pairs of denim are sanforized, though, so definitely make sure to fully understand what you’re buying before you do so you don’t accidentally shrink a pair of perfectly fitted jeans. 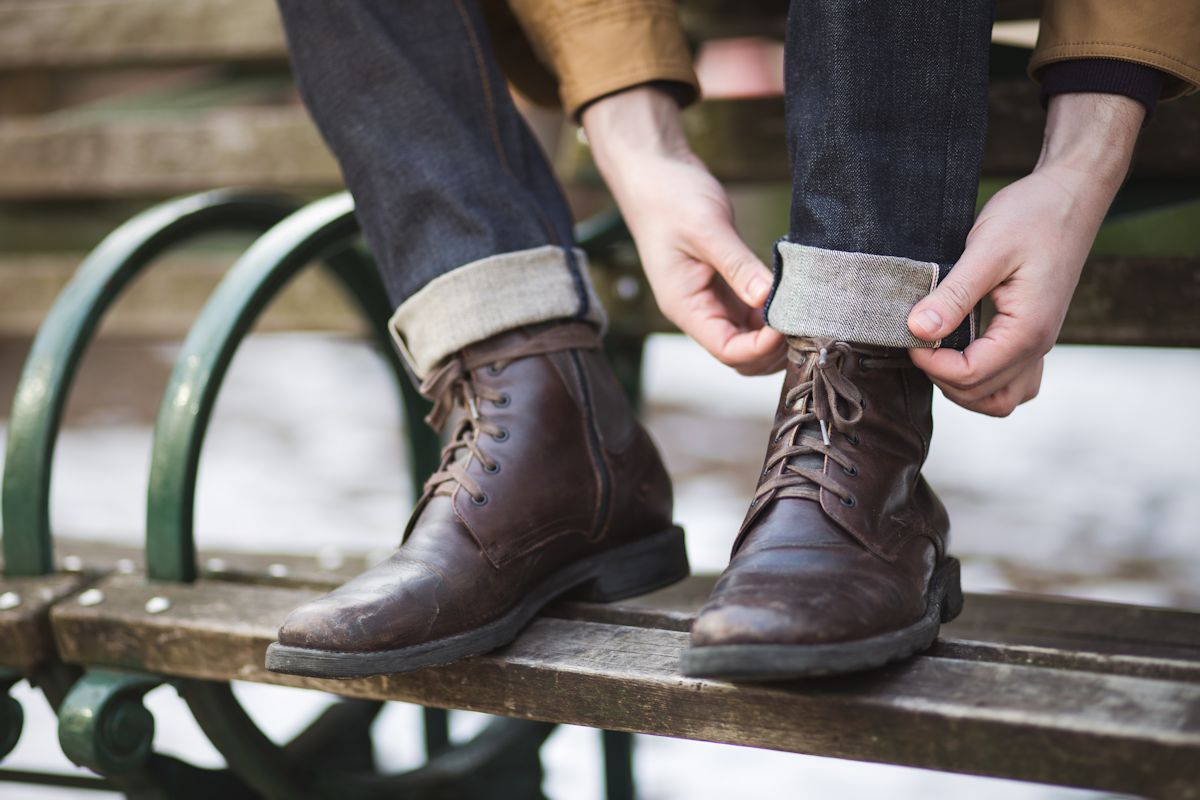 It’s recommended that you soak your jeans (sanforized or unsanforized) when you first get them to remove the starchiness of the denim and to make them easier to break in. Some also say to soak the jeans with them on, but we’ll leave that up to you to decide. To soak them in a tub, do the following:
Washing

Some people might tell you to never wash your jeans. But that’s gross. So, in lieu of that, we recommend washing your denim two to four months to keep them clean but also to ensure that they don’t lose their quality or shape. Obviously, if you fell in a puddle of mud or gave a homeless person a hug recently, wash the jeans. But otherwise, avoid washing them too frequently.

Turn your jeans inside out and wash them in cold water (a tub or a front-loading washer should do the trick). Let them air dry afterwards to maintain their shape. Additionally, you might want to wash your raw denim by itself for the first few times, just in case the indigo dye bleeds.

Raw and Selvedge Denim: Our Picks 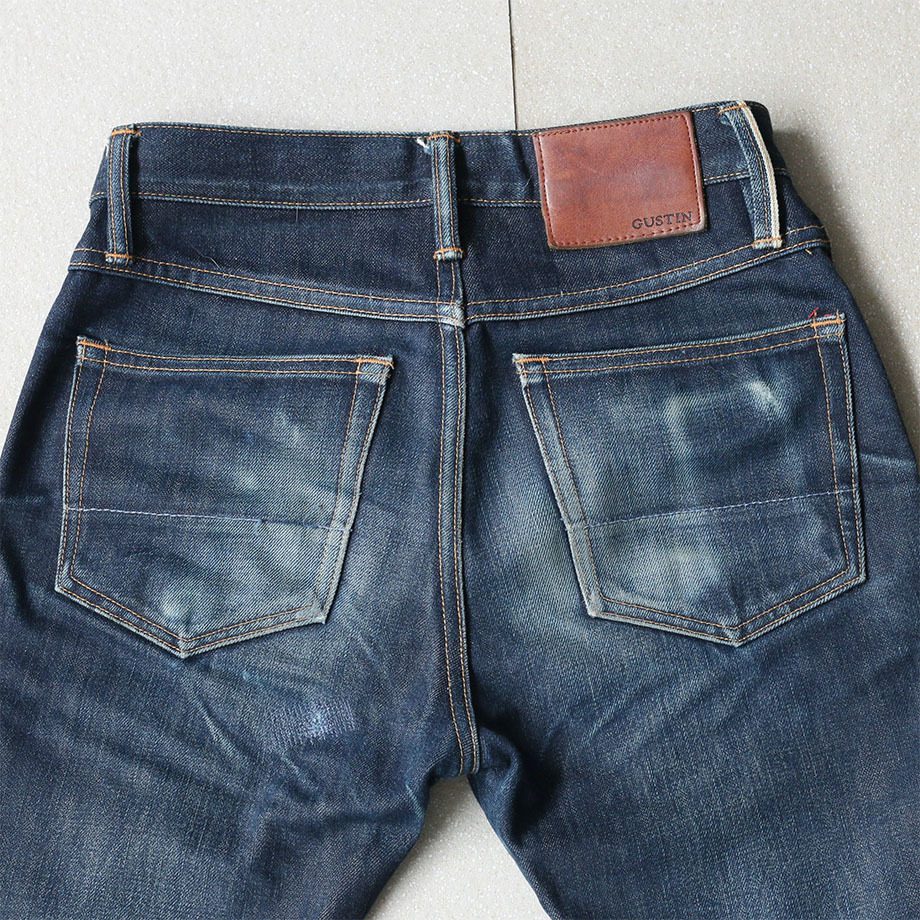 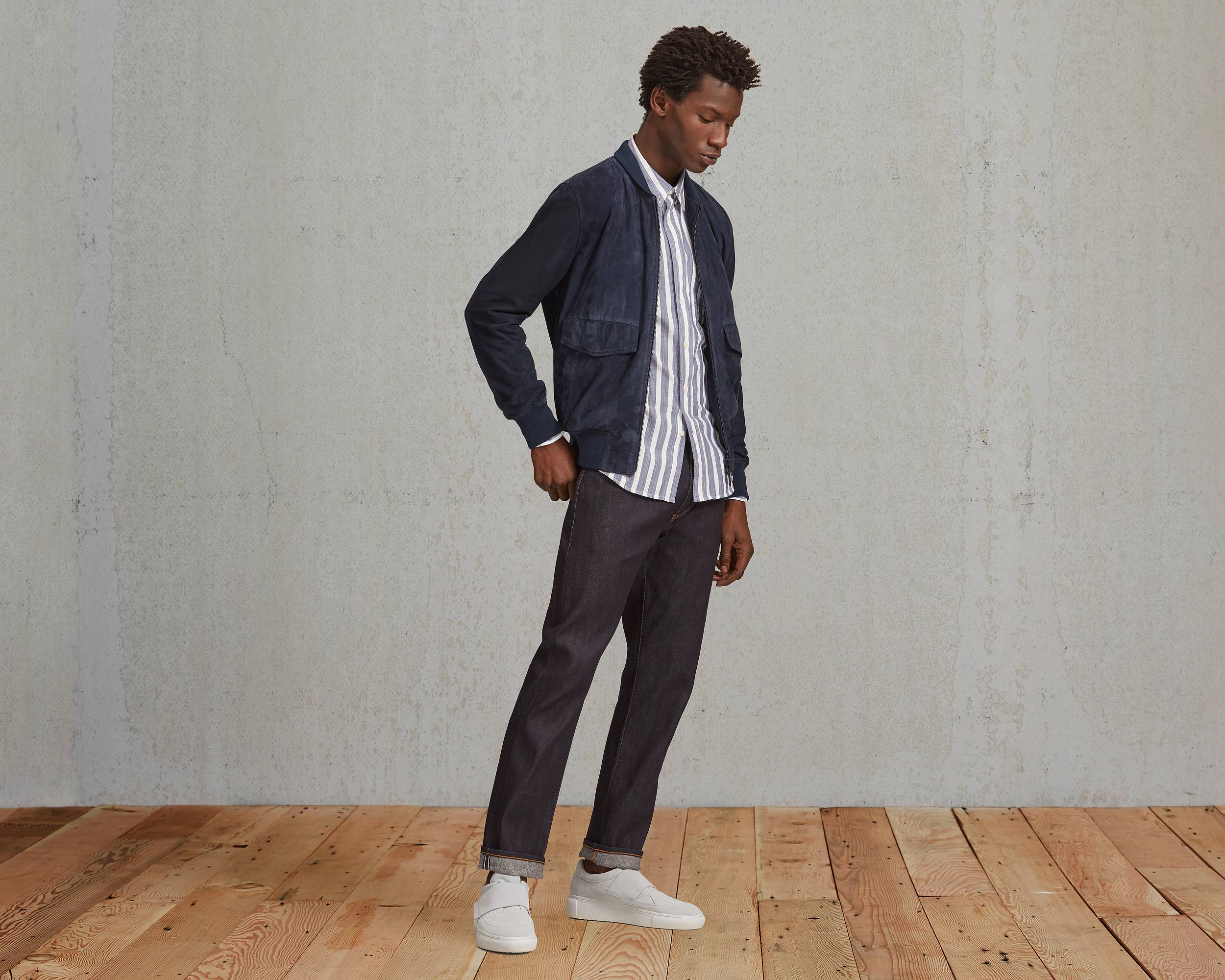 2. Made in the USA 501 Original Shrink-to-Fit Selvedge Jeans, Levi’s 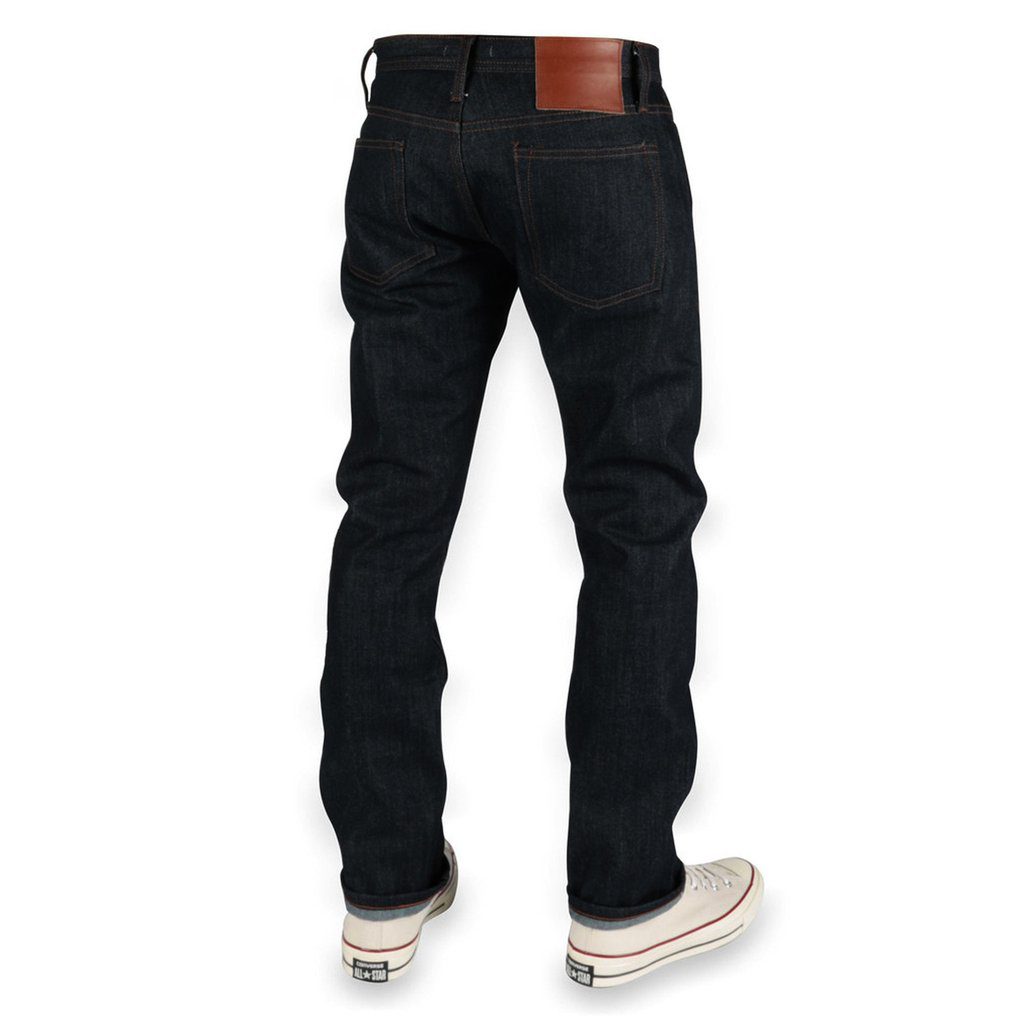 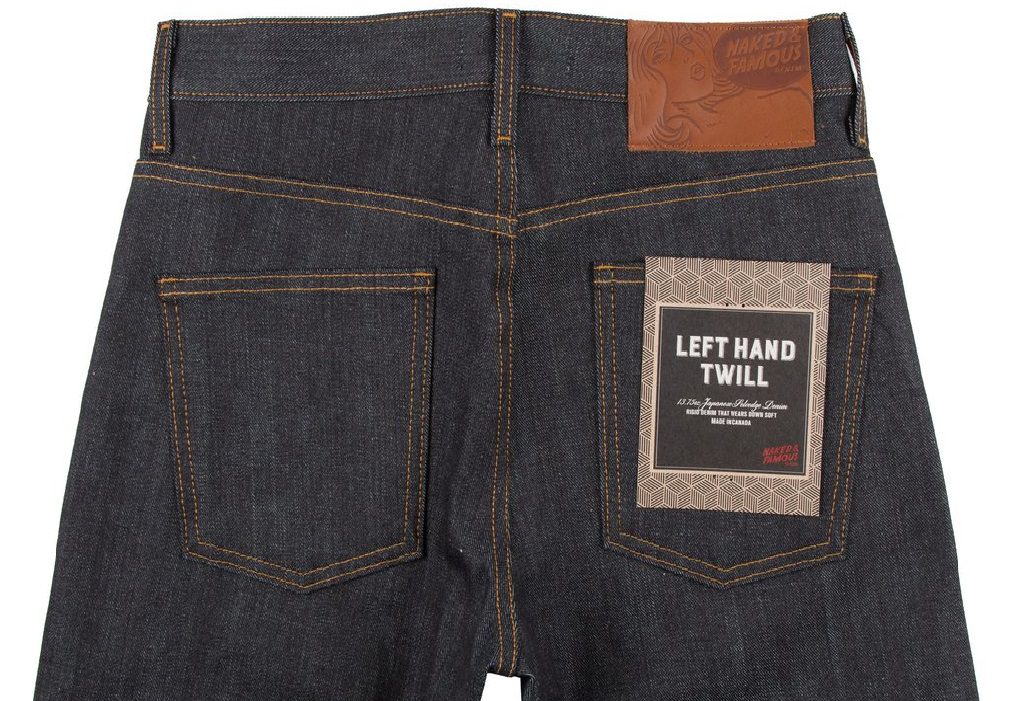 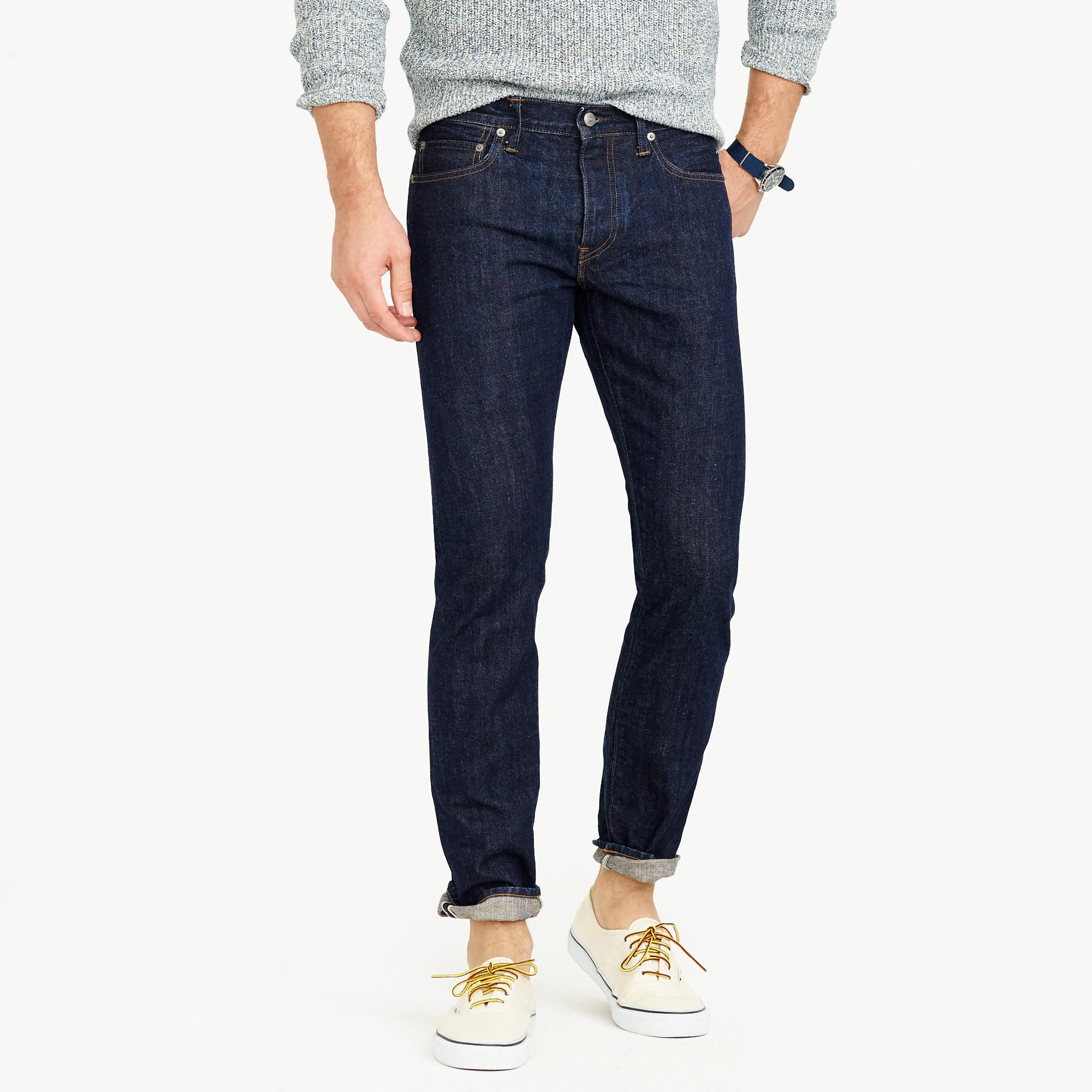