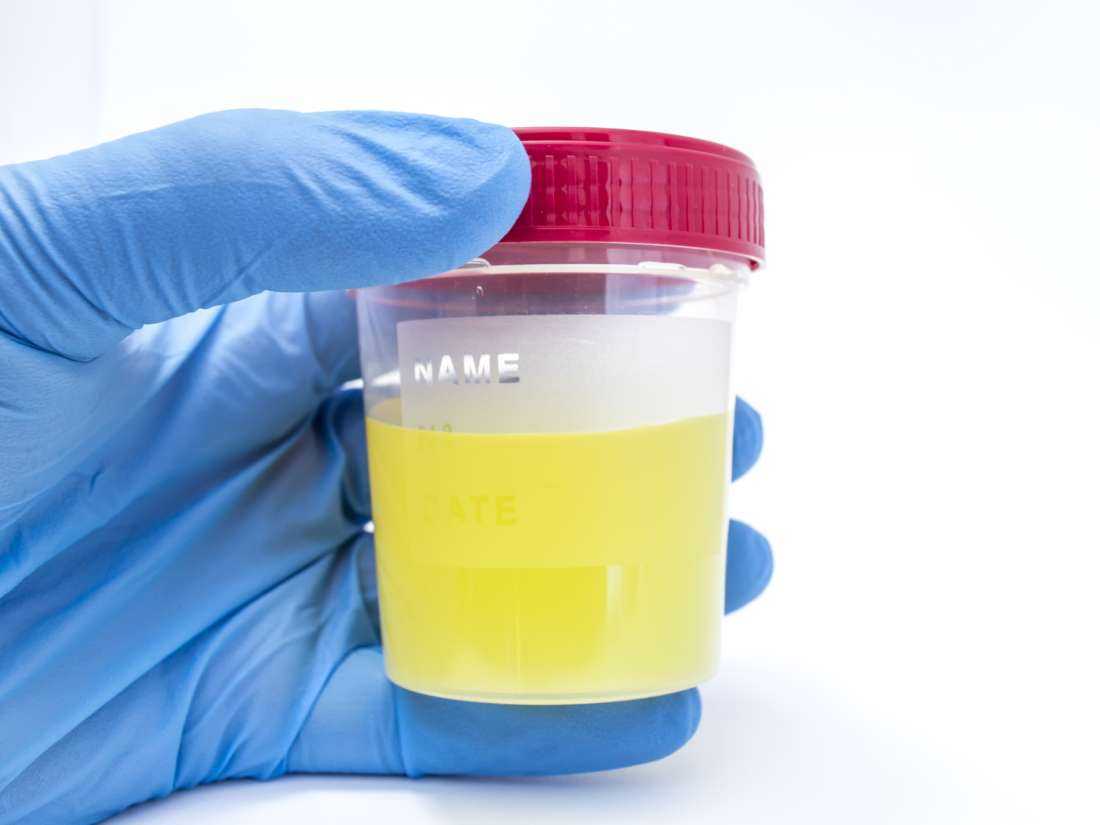 Cloudy urine can be unsettling, especially when a person does not know the cause. Sometimes it can signal an issue with the urinary tract, such as dehydration or a urinary tract infection, or it may point to kidney problems.


Each underlying cause of cloudy urine has additional symptoms, which can help a doctor make a diagnosis.


In this article, learn about the possible causes of cloudy urine, as well as how to treat them.


Causes of cloudy urine can include:

Cloudy urine, especially if it is dark, could indicate that a person is not consuming enough liquids.


Very young or very old people have a higher risk of dehydration. Also, anyone fighting off an illness that causes diarrhea, vomiting, or a fever will need to drink more fluids.


Those who do strenuous exercise or physical labor during hot days may also have a higher risk for dehydration if they are not drinking enough water.


Dehydration can cause cloudy urine in some people, as well as other symptoms, including:

Severe dehydration can cause more severe symptoms, including disorientation, a loss of consciousness, or bloody or black stools. Seek emergency medical care for severe dehydration.


A UTI is another more common cause of cloudy or milky urine. If the urine smells particularly foul, a person may have an infection.


The cloudy look typically comes from discharge of either pus or blood into the urinary tract. It could also be a buildup of white blood cells as the body tries to eliminate invading bacteria.


UTIs can happen in anyone but are far more common in females, according to the United States Office on Women’s Health.


Along with cloudy urine, a UTI can cause other symptoms, such as:

Anyone who experiences these symptoms should see a doctor for diagnosis and treatment. Treating a UTI early can help relieve discomfort and prevent complications.


Many kidney infections start as UTIs, which then spread due to lack of effective treatment and get worse over time.


Kidney infections cause similar symptoms to UTIs and may also cause additional symptoms, such as:


According to the Office on Women’s Health, about 20 million people in the U.S. get an STI every year.


These STIs may also cause unusual discharge from the vagina or penis. Other signs of an STI include:

Regular testing for STIs can help a person receive an early diagnosis and get treatment. Using protection during sexual activity may also help prevent the spread of STIs.


Vulvovaginitis is inflammation in the vulva and vagina, and it can lead to cloudy urine.


Bacterial infections are the most common cause of vulvovaginitis, though the infection can also result from viruses or fungi.


In some cases, the body may react to ingredients in soaps, detergents, fabric softeners, or other products.


These reactions can cause inflammation in the vulva and vagina without an infection being present.


Other signs of vulvovaginitis include:

A doctor will want to determine whether the infection is bacterial, fungal, or viral before moving forward with treatment.


An inflamed prostate, or prostatitis, may also be the cause of cloudy urine. The U.S. Department of Health and Human Services state that prostatitis affects between 10 and 15 percent of the males in the United States. It typically appears due to an infection in the prostate.


Other symptoms of prostatitis include:


Kidney stones can also cause cloudy urine. They develop from the buildup of certain minerals in the body.


Small stones may pass without incident, but larger stones can block the urinary tract and cause an infection, which could lead to pus in the urine, giving it a cloudy appearance.


A common symptom of kidney stones is severe pain below the ribs, generally near the side or lower back. The pain may also occur in the groin and radiate to the lower abdomen or lower back.


Other symptoms of kidney stones include:


In some cases, a person’s diet can cause their urine to be cloudy. Anyone who consumes high amounts of vitamin D or phosphorus may notice cloudy urine as their kidneys filter the excess phosphorus out of their body.


The U.S. National Kidney Foundation state that protein-rich foods such as meat, beans, and dairy products may be higher in phosphorus.


9. Diabetes or kidney damage from diabetes


Sometimes diabetes or diabetic kidney disease is the underlying cause of cloudy urine. The body may be trying to remove excess sugars that it cannot process by sending them through the urine.


Other signs of diabetes may include issues such as:

Untreated, the issues from diabetes may ultimately lead to kidney failure.


Anyone who has diabetes or experiences these symptoms should talk to their doctor, who can check for signs of kidney damage.


If cloudy urine accompanies other symptoms, see a doctor for a diagnosis. The doctor may ask for a urine sample, which they will test for infections. They may also test for common STIs.


Depending on a person’s symptoms, the doctor may also recommend blood tests to check for signs of kidney damage.


Treatment for cloudy urine will depend on the underlying cause. Typical treatments for each issue include:


UTIs: Most UTIs respond well to a round of antibiotics. In more severe cases, the person may need to receive these drugs intravenously, then orally.


STIs: Treatment will depend on the type of STI. Infections such as gonorrhea and syphilis generally respond well to antibiotics.


Vulvovaginitis: The doctor may recommend antibiotic, antifungal, or antiviral medication to treat vulvovaginitis and clear up symptoms.


Prostatitis: Prostatitis may get better without treatment. If bacteria are causing the infection, antibiotics may help treat symptoms. For chronic cases, doctors may recommend medications to manage symptoms.


Diabetes: Kidney problems arising from diabetes may require frequent urine tests to check for damage in the kidney. A person will also require treatment for the underlying diabetes.


Cloudy urine can result from a variety of common conditions, such as UTIs and mild dehydration. In cases that occur with other symptoms, early diagnosis and treatment are key to avoid complications.


Take note of any other symptoms that appear and share them with the doctor. This may determine the diagnosis and appropriate treatment.


By working with a doctor and following their instructions, most people can clear up the underlying cause of cloudy urine.