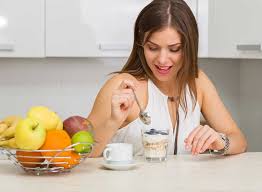 
Just as anorexia and restrictive dieting are serious issues, there’s another side of the spectrum that’s often overlooked but is just as serious. Though people use phrases like “eating feelings” lightly, it turns out binge eating can wreak havoc on your body. Of course, we all fall victim to binge eating every once in a while. Whether you’re on vacation or celebrating a birthday, it’s easy to eat a little (or a lot) more than you probably should, but when binge eating sessions become more frequent, you’re at risk of developing a disorder.

According to Executive Director of Binge Eating Treatment and Recovery at Eating Recover Center Julie Friedman, Ph.D., those with binge eating disorder will binge “at least once a week for three months.” Binge eating is a serious disorder that comes with both short- and long-term physical and mental consequences. Here’s what happens to your body when you binge eat.

You experience high levels of dopamine


It’s no secret: eating makes you feel great. Not just because it tastes good or fills up your hangry stomach. There’s actual science involved, too. As Registered Dietitian-Nutritionist Dafna Chazin explained, your body releases a chemical called dopamine when you eat. Put simply, dopamine is a “feel good” chemical involved in a ton of processes in your body.

While every meal triggers the release of dopamine, Denise Wilfley, a Scott Rudolph University professor at Washington University in St. Louis and National Eating Disorders Association representative, told Reader’s Digest that it’s the sugary, fatty foods we eat that release the highest levels of the chemical, which explains why you’re more likely to binge on potato chips or cake rather than a healthy salad.

It becomes a psychological addiction

You might think that high levels of dopamine sound like a good thing, but it’s only good in moderation. “Over time, the threshold needed to feel the same high is higher so the binge needs to be more intense (more food usually in less time) to feel the same effect,” said Chazin. Basically, where you used to be able to eat one cookie to get that dopamine rush, eventually you’ll need two and then five and so on. And like any addiction, binge eating comes with a real physical “sugar crash” that leaves you feeling tired and weak, sometimes even causing “sweating and shakiness,” Chazin said.

“Binge eating is much like bingeing on other things like drugs or alcohol. It produces a chemical reaction in the brain that keeps the behavior going,” said Monte Drenner, a licensed counselor, master certified addictions professional, life coach, and consultant. Drenner explained that, as with any addiction, long-term binge eating leads to a shorter “high” coupled with intense “emotional pain.“


We’re all aware of the most obvious physical symptom of binge eating, which is the overwhelming and uncomfortable fullness that makes you question whether you’ll ever be able to eat again. While you slip into a food coma (which Dr. Jennifer Haythe, an internist and cardiologist based in New York, explained to Teen Vogue is a very real thing), your body is hard at work trying to balance out everything you just consumed.

“When you overload your system with a rush of calories, sugar, and fat, hormones fluctuate, energy levels change, sugar is stored in fat cells, and you’ve probably added some stress and inflammation to the mix.” Abby Langer, registered dietitian and nutrition counselor in Toronto told Shape. In order to get things done efficiently, your body focuses most of its energy on digesting the high-calorie meal. “As a result, people often feel fatigue and low energy,” Haythe told Teen Vogue.


The high and crash of binge eating makes you vulnerable to a trend of binge eating and dieting that can destroy your body in the long run — and the cycle starts a lot quicker than you’d think. “Within about three weeks of binge eating highly processed, sugary, high fat foods, hunger and fullness cues are thrown off and dopamine becomes down regulated,” explained Tara Javidan, a licensed therapist at Clarity Clinic based in Chicago. The cycle is just as mental as it is physical.

“Clients generally start in a spiral of guilt and shame associated with the eating episodes and will attempt to use dieting to ‘get back on track,’” said Javidan, which ultimately leads to more binge eating as you attempt to make yourself feel better. According to Licensed Professional Counselor and National Certified Counselor Julianne Schroeder, “The intense self-loathing and feelings of helplessness someone experiences after [binge eating] can contribute to perpetuating the binge cycle.”


Aside from the effects binge eating has on your brain, there are also consequences for other parts of your body. Unsurprisingly, your stomach is one of the major organs that binge eating takes a toll on. As Registered Dietitian Lisa Eberly explained to PopSugar, the stomach is elastic and meant to stretch to hold the food you eat before decompressing back to its natural size as you digest.

“However, when you overeat, particularly somewhat regularly, your stomach can stretch permanently,” she said. The bigger your stomach gets, the more food you need to fill it up — and so the cycle begins.

You lose the ability to tell when you’re full


Not only will you need to eat more to feel satisfied, binge eating changes an important hormone in your body called leptin. Eberly explained to PopSugar that leptin signals to your body when you’re full, kind of like the friend in charge of telling you, “Bro, put the fork down.” But when you binge eat, you take in food too quickly and your body doesn’t have the correct amount of time to register the calorie intake and release leptin correctly.

A 1999 study in the Journal of Clinical Endocrinology and Metabolism found that this disrupts your system in the long run. Researchers tracked leptin levels of seven healthy women on two separate occasions. In the first round, the women ate three normal-sized meals for three days. For the second round, the same women ate one evening meal consisting of the same amount of calories as all three of the normal sized meals combined. Despite eating the same number of calories overall, the study found that “ingestion of an entire day’s calories at dinner resulted in a significant increase in fasting glucose levels and a dramatic increase in insulin responses to the evening meal,” which we learned can lead to negative side effects such as fatigue.

You disrupt your circadian rhythm


The effects of binge eating on the body aren’t just physical. There are some effects that you might not even realize are related to your eating habits, such as a difficulty sleeping. Eberly explained to PopSugar that binge eating messes with your internal clock.

“If you overeat, that clock can shift and actually make you want to eat more,” she said. “You could even wake up hungry in the middle of the night, or feel extra hungry the next morning, leading to eating even more.” If it’s not hunger that’s keeping you up at night and throwing your body’s natural rhythms off, it could be physical discomfort from your latest binge. Wilfley told Reader’s Digest that post-binge eating symptoms like acid reflux and thirst can make it hard for you to fall asleep.


Heartburn is a super uncomfortable sensation you probably notice after eating a spicy meal or any type of food that’s difficult for the stomach to digest. It’s also a direct side effect of binge eating.

Eberly told PopSugar that the “stomach makes hydrochloric acid to break down food.” She explained that the more food you eat, the more acid your stomach has to produce to break it down. This acid “irritates” your stomach lining and eventually makes its way into the esophagus.

Regular binge eating breaks your body down in the long run. As Chazin also explained to me, the heartburn binge eating causes “can lead to erosion of the esophagus cells” and could even eventually cause cancer.

You’re at risk for digestive issues


You’re probably familiar with that uncomfortable “too full” feeling after eating just a little too much, and maybe have even eaten to the point of feeling nauseated. Those two feelings are warning signs of more dangerous digestive issues. According to Chazin, “eating large amounts will often cause distention, reflux, cramping, and diarrhea.” Not fun.

She also warned that binge eating can eventually dehydrate you, especially when your foods of choice are high in sugar. According to Chazin, eating too many high-sugar foods can cause Dumping Syndrome, a phenomenon where a mass of sugar reaches your gut, drawing in extra water to help break it down. “This leads to very loose stool that have a high water content,” said Chazin. “This loss in fluid is usually not adequately replenished to restore the person’s hydration balance.”

You gain weight and are prone to more health issues


Any time you take in more calories than you put out, you gain weight. So unsurprisingly, the binge eating cycle leads to weight gain. Being overweight puts you at risk for more health problems as well. According to Javidan, some of these “co-occurring diseases” include “diabetes, hypertension, high blood pressure, [and] high cholesterol, which all increase the risk of heart disease or stroke.” Friedman agreed and added that weight gain can also “increase joint and muscle pain and inflammatory conditions.“


While everyone is guilty of binge eating every once in awhile, actual binge eating disorder is a mental health issue that was recognized by the American Psychiatric Association in 2013. Those who suffer from the disorder often deal with depression and anxiety as well, both before and after binge eating begins.

According to Schroeder, binge eating “often develops because someone has underlying emotional issues, [like] anxiety or depression, and they use binging as a way to temporarily numb distressing feelings.” While the dopamine rush during a binge temporarily makes you feel great, once this rush wears off, the depression sets in again. It can also be exacerbated if weight gain accompanies binge eating.

“The physical effects of the weight gain put more shame on clients who ultimately either develop negative body image or have an already negative body image worsen,” explained Javidan. This shame involved with binge eating can lead to clinical depression and anxiety.