Delivering a baby is one of the most miraculous things a woman’s body
can do, and also one of the most painful. If you’re pregnant, or if you
plan to get pregnant soon, you may be wondering what actually happens to
your body when you go into labor. Here’s what the experts say you
should be on the lookout for.

One of the first things that happens when you go into labor is that your water breaks. Sherry Ross, OB/GYN, told me,  “A
sign that early labor has started is if your bag of water breaks,
medically known as spontaneous rupture of membranes. For low risk women,
the rupturing of the membranes occurs spontaneously when your body
triggers a number of cellular events.”

Just like the other parts of the birth process are different for each
woman, you will experience your water breaking differently than other
women will. Dr. Ross continued, “It may be a subtle ‘leak’ or a ‘big
gush’ when your water breaks and you may or may not have uterine
contractions. But one thing is definite, early labor will begin within
hours of your water breaking.”

In other words, if your water breaks, it’s time to head to the hospital.

Your hunger and fatigue go away

You may think that giving birth would make you ravenous. After all, your
body is doing a lot of tough physical work. However, Dr. Stephanie
Romero, OB/GYN, told Splinter that’s not the case. She told them, “People
get very worried… about not eating while they’re in labor, but you just
don’t get hungry. You don’t get hungry and you don’t want to eat.”

Despite your body working so hard to push out your baby, you won’t get tired, either. Dr. Romero told Splinter, “Fight
or flight [keeps] you awake and gives you the power to keep pushing. No
matter what time of day someone is in labor — whether it’s 1 a.m. or 1 p.m. — they are wide awake and in the moment.”

Even though your body is so busy giving birth that you won’t have to
worry about getting hungry or tired, you’ll probably want to go to sleep
afterward.

Contractions are one of the more well-known parts of the labor process.
When you go into labor, your uterus contracts and starts pushing your
baby out. Contractions are painful, but they’re necessary to bring your
baby into the world. Dr. Ross told me, “As you get closer to term (38 to 42 weeks), your uterus, which is one large muscle, will start to contract.”

These early contractions, known as Braxton-Hicks contractions, aren’t
actually a sign of labor. Instead, they’re getting your body ready for
the labor that is coming in the future. Dr. Ross explained that for
women who are low risk, you are likely not in early labor if
contractions are irregular, sporadic, and you’re experiencing minimal
pain.

Dr. Ross advised, however, “Once the uterine contractions become
regular, appear closer together with increased intensity, this is a sign
that labor has started. Regular and painful uterine contractions,
occurring every three to five minutes for two hours, are a sign early
labor has begun.”

You get back pain

While contractions are painful in and of themselves, they cause back
pain, as well. In fact, one of the first signs you’re having
contractions is back pain. Dr. Ross explained, “Since the uterus is a
large muscle, the cramping sensation of the uterus tightening mildly
may be felt in the back when the contractions first begin.”

You may also feel back pain that’s unrelated to contractions. Kay Johnson, a certified nurse-midwife, told Parents, “Normally,
a baby descends the birth canal with its face pressed against the mom’s
spine. But in some cases the baby descends with its skull hitting the
mom’s spine.” When this happens, you’ll experience pain that may be
constant and may radiate to the abdomen even though it’s mostly felt in
the back.

As you might imagine, a lot of bodily fluids come out of your body along
with your baby. One of those fluids is mucus. Dr. Ross explained, “Normally
during pregnancy there is a mucus plug that covers the cervix which
leads into the uterus to help protect the baby from an infection. As you
get closer to delivering, the mucus plug will loosen and separate from
the cervix.“

The plug might come out as a precursor to labor, so if you find
something gross in your underwear a few weeks beforehand, don’t panic.
Dr. Ross described the plug as a tick, gray, sticky, and clumpy
discharge that you may find on your underwear or toilet paper. 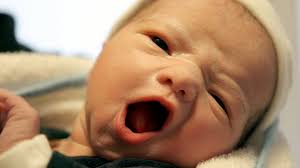 Gross, I know. But it’s all part of the beautiful process of bringing a baby into the world.

In addition to losing mucus during labor, you also lose a lot of blood. But don’t worry — blood loss is perfectly normal.

OB/GYN Kecia Gaither told me, “The placenta contains a lot of blood
within it, and there is blood loss during delivery, which is why the
body produced an increased volume of fluid during pregnancy in
preparation for this event.“

More blood also comes out when you push the placenta out after you give birth. Dr. Shannon Clark, an OB/GYN, told Splinter, “There’s
a big gush of blood that goes along with the placenta being delivered,
and that scares women a little bit. But as physicians, we’re programmed
to know what’s a normal amount of blood and what looks different and
needs extra attention.”

The cervix seems to disappear

When you give birth, your cervix does some pretty interesting things,
including moving, thinning out, and, seemingly, disappearing. Dr.
Gaither told me that during labor, the cervix “moves” from
posterior to anterior position in your vagina. It then thins out and
dilates to let your baby’s head pass through from the uterus.

After labor, the cervix magically returns to its previous tiny shape. Dr. Romero told Splinter, “The
most amazing part of this whole process is that an opening that
normally is so small you have to pull the skin apart to see it becomes
relaxed enough to accommodate a human child coming through,” she said,
“and then afterwards, it goes back to its old shape.“

Just as your cervix changes a lot during labor, your vagina also stretches a lot when you give birth. Dr. Gaither told me, “During
labor, the vagina stretches to accommodate the baby’s body exiting, and
with the increased lubrication allows the baby to essentially ‘slide
out.'”

Are you wondering how that feels? Dr. Gaither explained that women may
feel pressure as their baby’s head begins to deliver, similar to the
feeling of needing a bowel movement.

If you’re worried about what will happen to your vagina after you give
birth, rest assured that while it won’t go back to being completely the
same as it was, it will heal and the swelling will go down. Dr. Mary
Jane Minkin, clinical professor of obstetric, gynecology, and
reproductive sciences at Yale School of Medicine, told Health, “This area can feel fairly uncomfortable for some time, though it does get better within a few weeks.” She
also shared that sitting in a warm tub can help swelling and pain
subside. Doing kegels and other pelvic floor exercises will also help
you experience a quicker healing period after you give birth.

You deliver the placenta and then your uterus contracts

After you deliver your baby, you’ll deliver your placenta as well. Then
your uterus will begin to contract to its pre-pregnancy size.

Dr. Gaither explained, “The woman may have pain after delivery as the
uterus clamps down and involutes, or begins its journey to shrinking
down to almost its pre-pregnancy size.“

Even though it’s painful, your uterus contracting is actually a good thing. Dr. Gaither told me, “By clamping down, it also serves to close off all those open vessels that are present after the placenta delivers.“