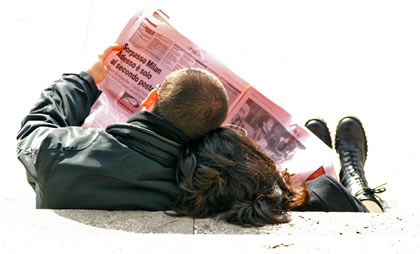 Research shows both pro-Arabs and pro-Israelis watching the same news reports think it is biased against their own side.


The media may well be biased, in fact it would be a miracle if it were permanently and perfectly balanced, that isn’t what this post is about.


Instead this is about how you and I perceive the presence or absence of bias in the media.


This study, conducted in the 1980s, helps to explain a lot of the heat and light that gets produced by those commenting on media bias across the political spectrum, including the remarkably vitriolic outpourings often seen in the comment sections of newspaper websites and across the internet.


Robert P. Vallone and colleagues from Stanford University invited 144 Stanford undergrads who held a variety of views on the continuing Arab-Israeli conflict to watch some of the news coverage of the Beirut massacre (Vallone et al., 1985). The Beirut massacre was the killing of between 328 and 3,500 Palestinian and Lebanese civilians by Lebanese militia forces in September 1982.


At the time the story received huge media coverage around the world with much speculation about whether Israeli forces had allowed it to happen (a subsequent commission held the Israeli government indirectly responsible).


Some of the participants recruited for the study were moderate in their initial views, others were specifically recruited from both the pro-Arab and pro-Israeli student associations. Each was asked for their views about the conflict, its history and where their sympathies lay. Here’s what they found:

All the participants then watched a series of news segments taken from US networks (NBC, ABC and CBS). Afterwards they were asked to rate whether overall it was for or against Israel. They used a scale of 1 (heavy pro-Arab bias) to 9 (heavy pro-Israel bias) where a rating of 5 was fair and impartial.


Here are the average ratings for the news coverage from each group:


Notice that those who claimed to be neutral thought the coverage had a slight pro-Arab bias. This could be a hint of actual media bias or could be just an unacknowledged bias in those initially declaring themselves neutral.


Causes of the hostile media phenomenon


The study demonstrates what the authors call the ‘hostile media phenomenon’: people’s tendency to view news coverage about which they hold strong beliefs as biased against their own position.


There were two mechanisms at work here:

Put simply: when we care about an issue, we tend not to notice all the points we agree with, and focus on the ones we don’t.


Whether the news actually is biased in one particular outlet about an issue that you care about can be very hard to quantify.


What we can say from this study is that people who care about a particular issue will tend to find media bias everywhere, whether or not it really exists. Not only that but they are unlikely to admit this fact to themselves since this study, amongst others, also shows how remarkably resistant we are to admitting to our own biases, even when they are categorically demonstrated to us.