The Best and Worst Menswear Trends, According to the Experts

Nail the look with no OT 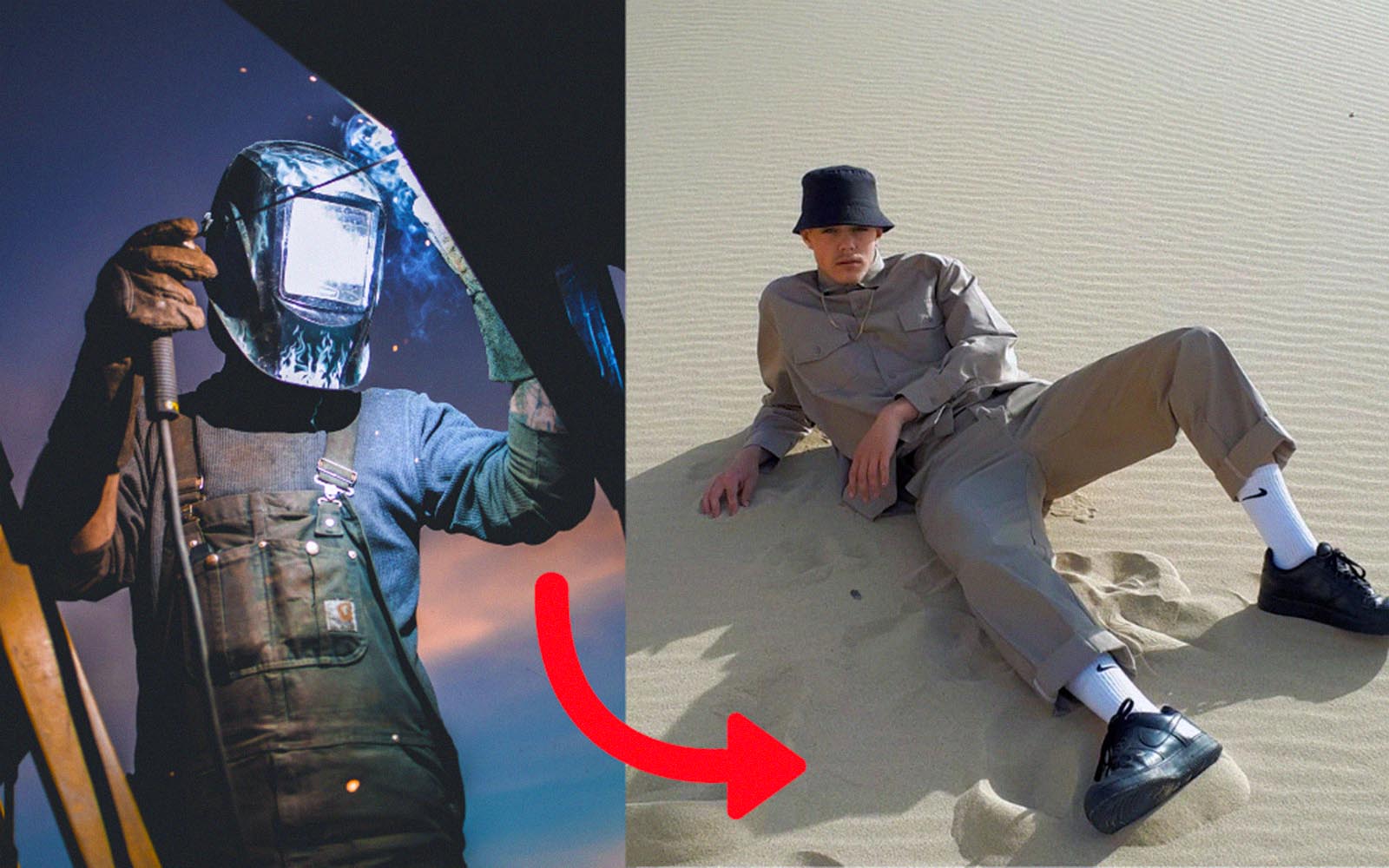 Written by Janet Hu[Feature images by Max LaRochelle and @gabe_.g4s]

Blue-collar workers have always made up a large part of the industrial backbone, and it’s kind of neat that hipster millennials around the world have creatively adopted elements of their style.

What Workwear Is (and Isn’t): 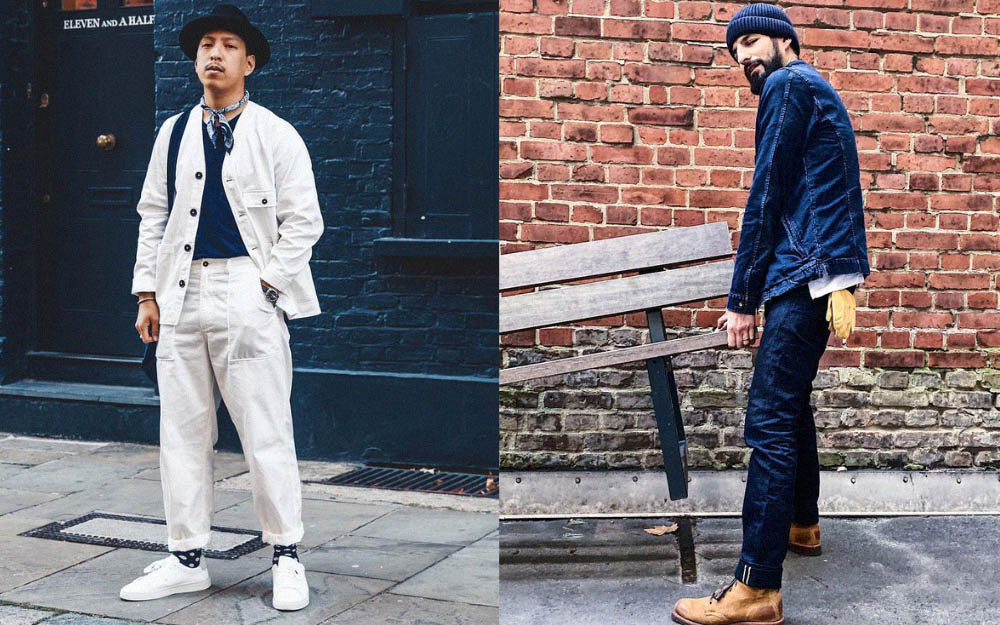 Workwear started as safety clothing for manual laborers. It’s often constructed of sturdy fabrics like denim and corduroy, and it has an oversized fit to allow for movement. Though the utility wear trend seems very much late 2010s, Dickies cites its first appearance in fashion as early as 1988 with streetwear trendsetters in Southern California sporting classic workwear jackets and pants.

Workwear itself is not to be confused with skater style or streetwear, though both fashion styles do incorporate elements of work safety clothing, i.e. skateboarders wear Dickies and hip-hop artists rock Timberlands. Today both men and women mix elements of workwear, particularly wide-legged pants, heavy-duty boots, and utility jackets, into their personal style. 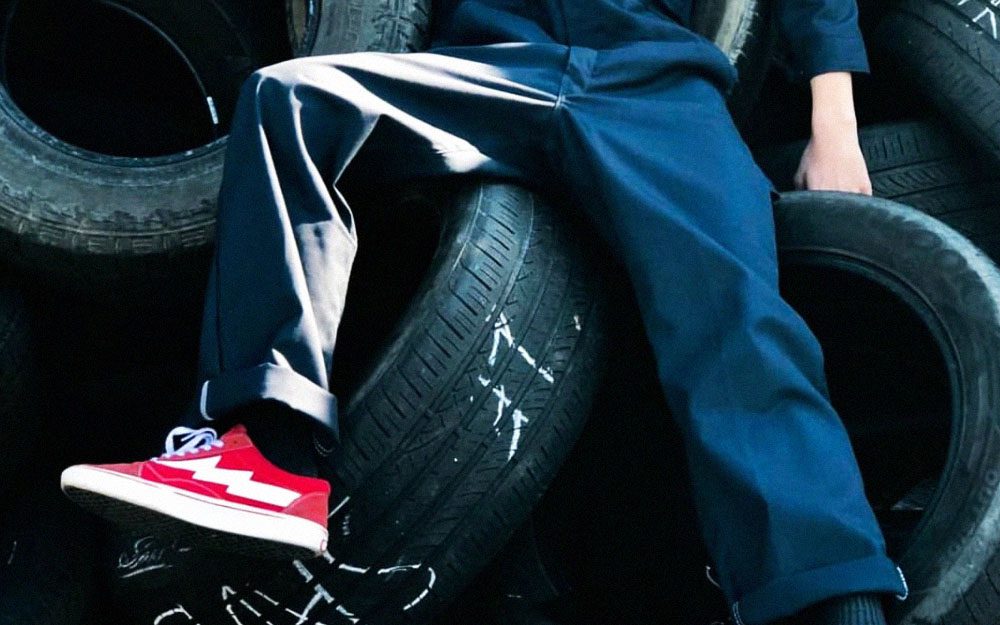 Dating back to the late 1800s, cowboys, factory workers, and even motorcyclists wore denim to protect them from injury. Thick work pants are water and dirt resistant, and they’re durable enough to withstand extreme weather and erosion from intensive labor. Because of this, they’re typically made of sturdy plain-woven fabrics and undergo water resistant, stain resistant, sweat resistant, and wrinkle resistant treatments. 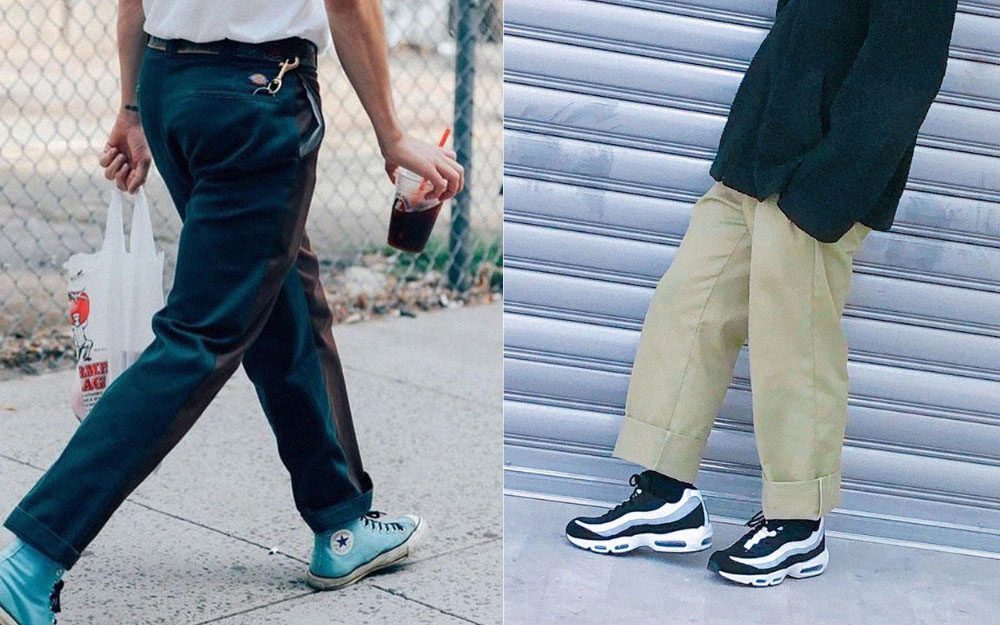 These wide-legged trousers suggest an action-intensive and industrial look. Instead of taking the form of traditional denim, workwear pants often have the appearance of baggy chinos that sit below the waist. Also, popular colors include beige, brown, navy blue, and black.

We once stated that baggy jeans should be banished from your closet. And, as does every responsible publication that updates with the times, we’d like to edit our previous statement. Baggy pants are making an apparent comeback. Though we still advise modern workwear pants, which are quite structured, over light-wash baggy denim.

Donkey jackets originated in mid-19th century England, worn by dustmen, coalmen and other manual laborers of the industrial era. These medium-length woolen jackets have maneuverability and safety in their design, with clean lines and an untailored waist so they hang straight down from the shoulders.

Unlike suit jackets, workwear coats don’t have lapels or back vents. Instead, they have stiff broad collars that the wearer can flip up for protection from wind, cold and wet weather. As far as design, the typical utility jacket has four front pockets and four to five buttons that fasten tightly up to the neck. 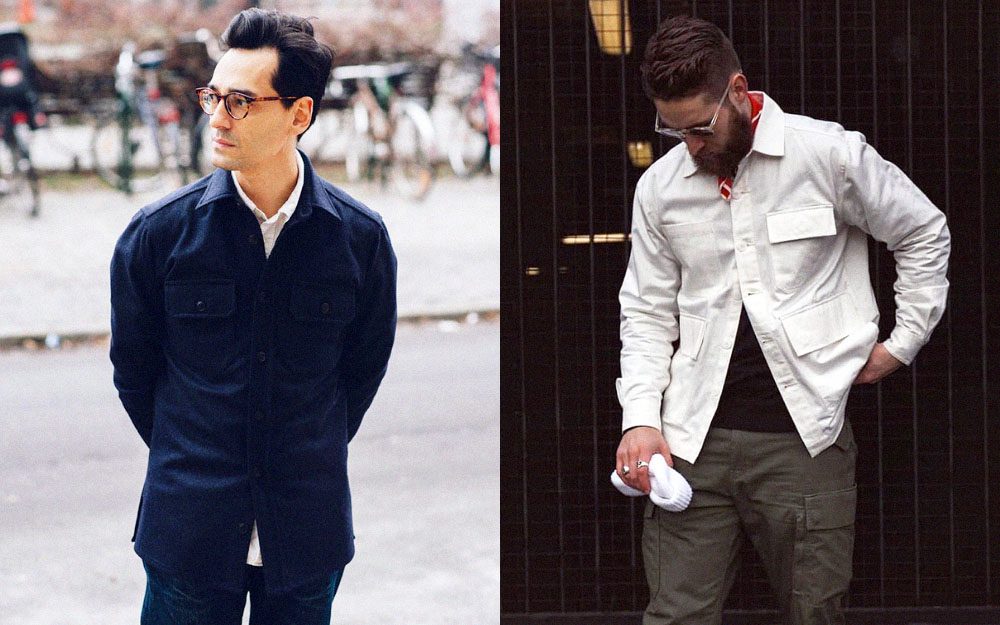 Workwear jackets provide a boxy silhouette along with a no-nonsense bearing. These intentionally unadorned, structured coats have a uniform, almost military effect that is both nonchalant and commanding. In line with workwear tradition, utility jackets are best worn over a rollneck sweater, but you can also toss one on over a casual collared shirt. 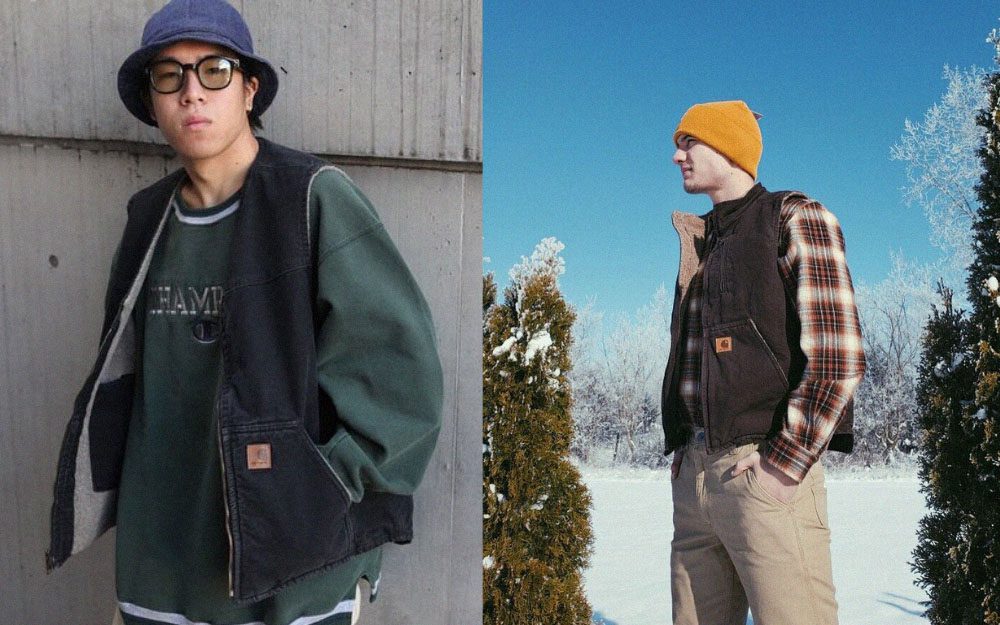 Workwear vests are constructed of the same sturdy fabric as workwear jackets, and they serve the same purpose in durability and insulation. 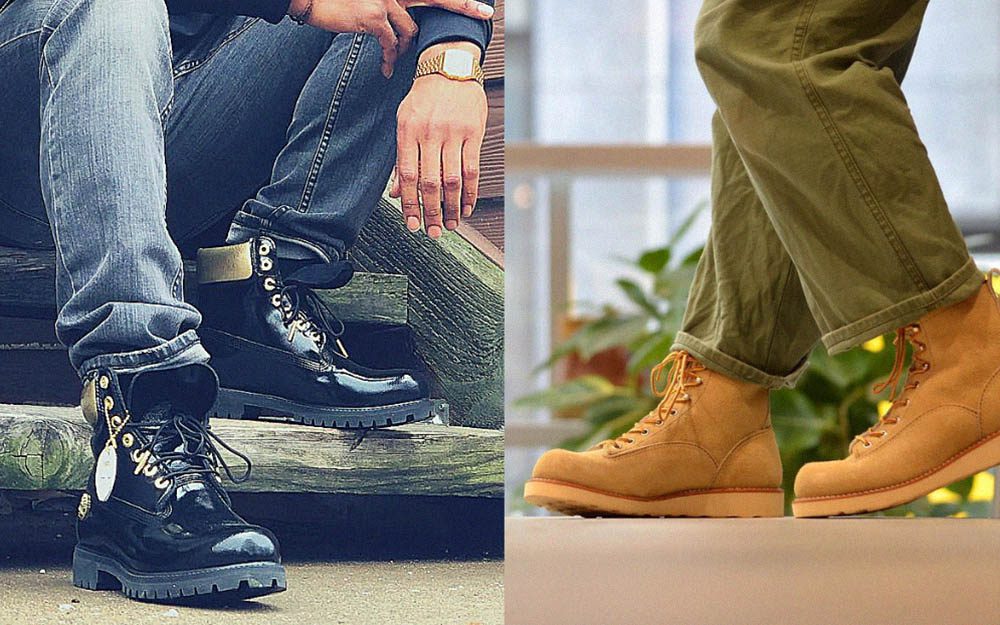 Workwear boots were originally intended as safety boots, made of sturdy materials that repel rain, mud, and chemicals. Many work boots even have built-in steel caps over the toes to protect construction laborers from hard falling objects.

Doc Martens were first adopted as fashion footwear by British punkers in the 1980s. The heavy-duty “I can kick your ass” aesthetic is well-loved by rockers and hip-hop artists alike.

Outside of hard hats, workwear head-toppers have become a part of mainstream fashion. 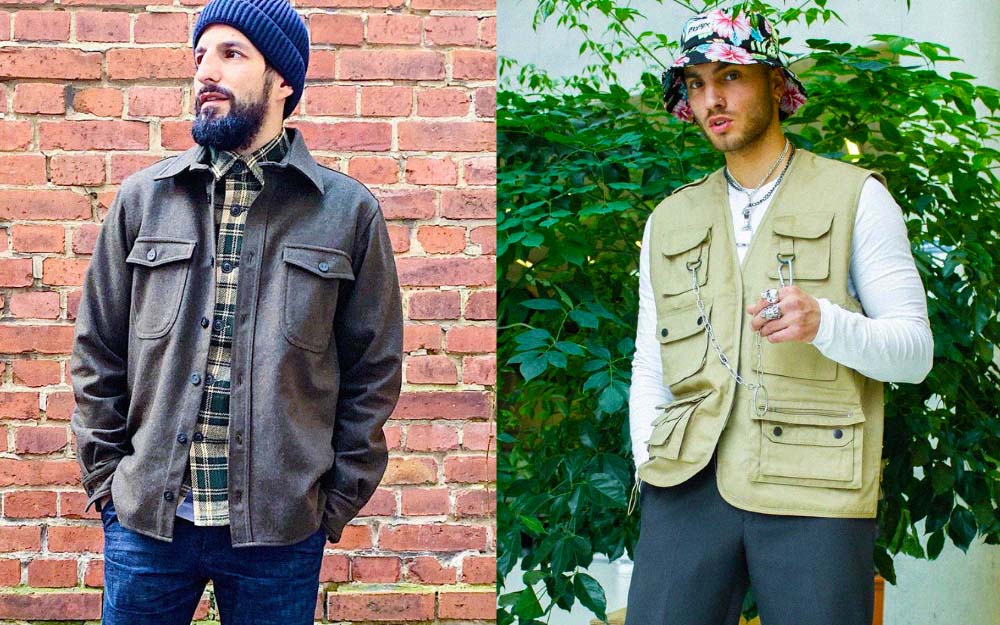 Welders, mechanics, and other blue-collar tradesmen who needed to keep their hair back but didn’t want the obstruction of a hat brim would wear beanies. Today, these knit, head-hugging caps are popular among youth with active lifestyles.

Bucket hats are typically constructed of sturdy fabrics like denim or canvas, and they have a wide and downwards sloping brim. Fishermen and farmers wore these soft hats to shade their faces from the sun. Today, bucket hats can feature bright colors and loud prints, and they’ve become a popular item in streetwear fashion.

Flat Caps aren’t necessarily essential or authentic to workwear. These hats are less about utility and more about social standing. The English Parliament mandated tweed hats in the 1500s when it wanted to stimulate domestic wool consumption. The government forced any man of non-noble class, such as tradesmen or apprentices, to wear a wool flat cap. Today, the hat still exists as part of fashion, but it is typically associated with an older working class. Note: flat caps were never utility clothing for the workforce, thus they aren’t exactly workwear.

If you’re wearing workwear pants, you may want to wear converse sneakers as footwear. And if you’re wearing heavy-duty work boots, opt for slimmer fitting denim or chinos.

Hoodie sweaters are not workwear, but they are a streetwear and skate style staple. So you may wish to wear hoodies as a baselayer beneath workwear vests or jackets. These soft warm sweaters also pair well with wide-legged pants.

How do you wear workwear? Are you for this trend, or nah? Let us know in the comments below.

Janet Hu
Editor of The GentleManual